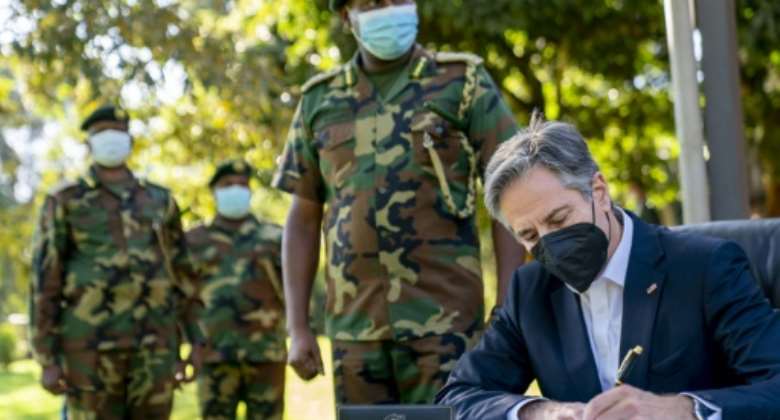 US Secretary of State Antony Blinken is looking to champion President Joe Biden's key priorities of promoting democracy and fighting both climate change and the Covid-19 pandemic. By Andrew Harnik (POOL/AFP/File)

Secretary of State Antony Blinken heads to Nigeria on Thursday as persistent unrest and human rights concerns prompt calls for a rethink of the US relationship with Africa's most populous nation.

The top US diplomat is on his first trip to sub-Saharan Africa where he is looking to champion President Joe Biden's key priorities of promoting democracy and fighting both climate change and the Covid-19 pandemic.

On his first stop Wednesday in longtime ally Kenya, Blinken called for African-driven solutions to the continent's crises including the spiralling war in Ethiopia -- where Nigeria's former president, Olusegun Obasanjo, has been leading mediation.

With 20 percent of sub-Saharan Africa's population and its largest economy, Nigeria is critical for any continent-wide strategy and successive US administrations have courted Nigerian leaders since the restoration of civilian rule in 1999.

But US views of Nigeria, already marred by years of violence and rampant corruption, hardened last year after security forces unleashed deadly violence during massive protests against police brutality.

Biden, in an unusually forceful statement as a candidate, voiced solidarity with the protesters and urged President Muhammadu Buhari -- whom Blinken will meet Thursday -- to rein in security forces.

Senator Bob Menendez, a member of Biden's Democratic Party who chairs the Senate Foreign Relations Committee, at a hearing with Blinken called for a "fundamental rethink of the framework of our overall engagement" with Nigeria.

But Nigeria recently started receiving a separate shipment of Super Tocano warplanes after former president Donald Trump gave the green light to the sale that had been held up by the previous administration of Barack Obama following Nigeria's accidental strike on a refugee camp that killed more than 100 people.

Blinken's predecessor Mike Pompeo, who did not visit Nigeria, made the decision late in his term at the urging of evangelical Christians who say that attacks on the community in the religiously diverse nation are systematic.

Blinken, in Nairobi, also nudged close ally Kenya on ensuring free and safe elections next year -- and acknowledged that the United States was "hardly immune" to such concerns, a veiled allusion to the January 6 mob violence by Trump supporters who sought to overturn Biden's victory.

Protesters in Abuja gather in October 2021 with placards to commemorate one year after the police crackdown on Nigeria's EndSars mass demonstrations. By Kola Sulaimon (AFP/File)

Oge Onubogu, West Africa director of the US Institute of Peace, said the Biden administration should see parallels between Nigeria and Ethiopia, where lingering ethnic conflict in a major nation has mushroomed into a devastating war that risks regional chaos.

Blinken, she said, can reinforce the message that "what happens in Nigeria doesn't only affect Nigeria, but it affects West Africa and the rest of the continent as well".

Onubogu said there should be no more "business as usual" and that the United States needed to deal more directly with the Nigerian people, not just the government.

State Department officials said Blinken would raise human rights in Nigeria and meet civil society groups throughout the trip, which will also take him to Senegal.

"That's what folks will be looking at. They will be saying, ok, the tone is changing, but they will want more assurances that things are actually changing in the right direction," Onubogu said.