Petition to Ghana Parliament on the issue of LGBTQ+ 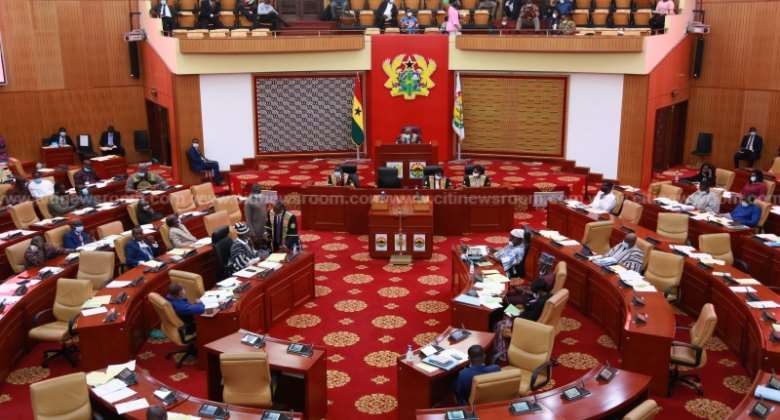 To the Member of Efutu Constituency

on the issue of LGBTQ+

The Committee handling the Promotion of

first, I would like to introduce myself as a relative of Mrs. Rawlings, the wife of the late ex-President J.J. Rawlings.

I am by profession a consultant physician specialist, who lives and works in Germany.

I have listened to the views of some members of the majority group in Parliament and I am afraid if certain notions are not corrected the whole exercise would have been in vain.

The LGBTQ+ issue is, as we shall see later on, a purely medical, psychological and biological issue and not a constitutional issue. Only from this point of view can this discussion be continued.

Please note: LGBTQ+ is a disorder of sexual preference. The definition of disorder in medical practice means a disruption of normal physical or mental function, e.g. a skin disorder. One sees therefore clearly that all the speakers are mistaken in their views. One cannot substitute a medical issue with a legal or constitutional one.

The mainly opposition speakers should realise however, that the human rights etiquette attached to the LGBTQ+ issue was a deliberate action to give any attacks against this behaviour as taking someone's rights from him. This is pure and simple a fallacy.

The aim of our party is primarily to give you important information about the nature of the LGBT as an entity. Before I proceed I would like to make certain recommendations and to offer you the opportunity to know from the point of view of medicine the real meaning of LGBT.

In other words, the information I want to give you is based on medical definition of this disorder without which the committee cannot make a fair assessment of what the petitioners intended to do.

Dear members of the Committee, dear readers, a group of archaic so-called academicians have collectively and simultaneously met to cook up a so-called petition to the Parliament of Ghana with the attempt to block the anti-LGBT bill presented to the parliament for deliberation.

The arguments of these academicians are full of words like

I maintain, however, it is strange that they argue that religious values should not form the basis of a law, even though they agree that human rights values could also be the basis of a religious faith.

This is a paradox.

We from the NDP are of the opinion that the anti-LGBT bill before the Special Committee before the Parliament is nothing than a prohibition bill introduced purely to prevent the medically recognised so-called ICD-10 which is an example of disorder of sexual preference, e.g. exhibitionism.

The exhibitionists are those men or women who expose their genitals, usually to an unsuspecting stranger, while simultaneously sexually excited when doing so. There are lots of examples by previous Catholic priests dioceses who were accused of sexually exposing themselves to children.

For the sake of decency please forgive me if I do not give more examples of these serious disorders that lead to the sexual arousal of individuals and specific behavioural impulses.

For more information I wish to refer the committee or my readers to the “Handbook of Sexual Assault” pages 279 – 295. The authors are Vernon L. Quincy, Christopher M. Earls from the Dept. of Psychology, Queens University, Kingston, Canada.

and not a gender or fornication or adultery problem, as claimed by the Group of 18.

Dear members of the Committee, we are of the opinion that to understand the whole case it is important to know the meaning of the word gender.

Any re-interpretation of the Constitution though could not be within the realm of a Parliamentary Committee, but subject only to a decision of the Supreme Court.

It seems obvious that the writers of our Constitution made an informed decision to separate any sexual “orientation” or “preference” (i.e. reason for or object of sexual arousal and behavioural impulse) from a person's gender and decided to not include these sexual orientations and preferences.

Therefore the presentation by the Group of 18 using “gender” as an argument is fake and could at best be described as a deliberate attempt to mislead the Parliamentary Committee.

In conclusion therefore I wish to repeat what I said before that the whole issue of LGBTQ+ issue is a medical problem.

A copy of this letter I am sending you will be sent to the Attorney General in the Ministry of Justice of Ghana. Now-one is above the law and the Group of 18 is above the law and I therefore appeal to the Committee to ask questions why they sought to mislead the Parliamentary body.

At the same time I would like to draw the attention of the Committee to statements made by an experienced lawyer in Ghana, who talks about threats to families and fornication to be rejected as total nonsense.

Sam Nartey George is the lead advocate for the said Anti-LGBTQ+ bill submitted by some 8 MPs.

The 38 page before Parliament among other things stipulates that

The bill targets persons who hold out as

or any other sexual or gender identity that is contrary to the binary categories of male and female.

Promoters and Advocates of

The Argument of the 18-Member Opposing Side

“Promotion of the Bill 'Promotion of Proper Human Sexual Rights and Ghanaian Family Values', when passed into law would erode a raft of fundamental human rights as enshrined in the 1992 Constitution”

What does the 1992 Constitution say about Human Rights

(2) Every person in Ghana, whatever his race, place of origin, political opinion, colour, religion, creed or gender shall be entitled to the fundamental human rights and freedoms of the individual contained in this chapter but subject to respect for the rights and freedoms of others and for the public interest.”

There is so far no evidence of “gender” as a living persons residing in Ghana has had his or her fundamental human rights abused.

So long as information about LGBTQ+, what it is, what they, their rights and what that entails is scanty, the State Attorney General of Ghana cannot make any meaningful contribution about this issue.

What activities of LGBTQ+ are being discussed ?

We are talking about

The Kinsey-Report showed that almost 5% of all people have homosexual tendencies.

The most Western countries have for their own reasons made laws which make homosexual activities legal, but that does not translate those culture which make laws to outlaw the behaviour as taking someone's human rights away.

The behaviour of LGBTQ+ is and will forever in many parts of the world classified as a disorder of sexual preference whether some European Nations want it or not.

Our morals are not and have never been compatible to what the EU considers right. These Nations have time and time shown exclusively that it is their nature to dominate others. That's it !

Domination is their nature.

Where was Anglican Church when African footballers were being booed as monkeys. What was and is their stand ?

What was their reaction when George Floyd's human rights was totally abused and his life taken away from him ? Shame on them.

The Anglican Church up until today has not paid reparations for enslaving our people.

Our people are suffering in the following far away countries:

The modification of inappropriate sexual preferences is of central concern in many treatment programs. Here the United Nations has shown its hypocrisy and its bias against black people.

The Treatment of LGBTQ+ is not a human rights necessity

The focus (they write) on inappropriate sexual interest follows from repeated observations that sex offenders such as child molesters, rapists and sadists, frequently report ruminating over sexual fantasies involving the types of behaviours in which they engage moreover , the relative amount of sexual arousal elicited by deviant and non-deviant cues in phallometric assessment more consistently differentiates sex offenders from other males than any other measures yet tried (see Earls & Quincy, 1984 and 1986 for reviews)

The question for the United Nations, the Anglican Bishops, what do we do for the sex offenders in your country. Women, boys and men are being killed on daily basis.

Disorders of sexual preferences (the term used in DSM IV) are disorders in which an individual is sexually aroused by inappropriate stimuli.

Should and can a perverse person's activities be described as legitimate human rights behaviour ?

Does rejection and sometimes punishing a sexual perversion constitute abuse of human rights ?

Homosexuality was previously included but through lobbying by people like Elton John it is no longer the case. Why homosexuality was banned and people who indulged in such activities were jailed is not clear.

Countries which reject LGBTQ+ are

and many many more.

Why do embassies in Ghana break the Vienna Convention Art. 41 to deny Ghanaian citizens visas to visit their countries. This is racism. Ghanaian laws are paramount to any foreign laws.

Examples of Disorders of Sexual Preferences

Does the Archbishop of Canterbury know that there are sex offenders among the LGBTQ+ group ?

Should a sex-offender have a treatment program ?

If they do, are we going to qualify the humane corrective treatment as human rights abuse ?

Have the 18 Ghanaians who sent a Petition to the Parliament requesting the rejection to punish sex-offenders among others made even the effort to read about the issue they reject.

The issue of disorder of sexual preference is:

What the Group of 18 Ghanaians Say

The lawyer Akoto-Ampaw, a private legal practitioner, a Ghanaian said or wrote in his petition to the Parliament.

He is against the anti LGBTQ+ bill because, according to him, people's fundamental human rights will be abused.

Please note this man talks of people in general but not specifically the LGBTQ+ people.

Fair enough, but he is not known to have previously have campaigned in similar manner about cases of human rights abuses in Ghana and for that matter in the wide world.

People who commit suicide have mental disorders, but most homosexuals suffer from something called “arouse”, meaning a compulsive urge to act.

If there are remedies and they refuse to be helped medically, that results in wilful intent and must be punished.

I therefore support the bill to be passed.

Where was the Archbishop of Canterbury when African Americans were being used as guinea pigs for syphilis and other diseases ?

Where was the Anglican Church, the UN and the whole world when black Americans are being killed on a daily basis because of the colour of their skin ?

It could have been you.

Where was the Anglican Church when talented black football players are being booed and called monkeys in all European nations ?

Why did the group of 18 misleading entities in this country did not ask for at least for humanitarian reasons ask for a memorial service for the dead ?

62 citizens of Niger were killed by terrorists in Niger, the country ordered 2 days of mourning; in Ghana, none. The lives of Ghanaians are cheap ?

The writer of this article happens to be the brother in law of the late ex-President Rawlings. I am a consultant physician specialist, resident and practising in Germany.

I maintain that the people of Ghana like Europeans have values and this should be respected by Europeans. The LGBTQ+ is a medical, biological and psychological problem. These people need help.

Defiling children and others remains a crime if the facilities for recovery are not accepted.

Questions to be answered by the members of Parliament

To answer the question about the relevance of the Constitution here, I have in short presented the Members of Parliament with what LGBTQ+ medically and biologically is !

We all can make a judgement on a topic if and only if we know what the issue is.