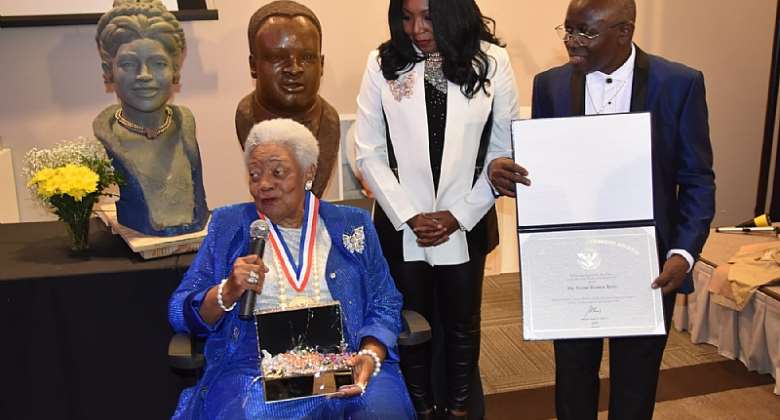 Mrs. King, who is the widow of Rev. Alfred Daniel (A.D) King, was honored on the occasion of her 90th birthday celebration and 12th Annual A D King Foundation Youth Empowerment Award Gala 2021 held at the Atlanta Metropolitan College.

The lifetime achievements award was bestowed on Mrs. King by President Biden for her tireless efforts in fighting for civil liberty and youth empowerment.

During the lifetime of her husband, Mrs. King was a pillar of support for her husband. Together, she and her husband supported Martin Luther King, Jr., when, in 1955, Rosa Parks was arrested for refusing to move to the back of the bus in Montgomery, Alabama; at the creation of the Southern Christian Leadership Conference (SCLC) in 1957; when students in Greensboro, North Carolina, launch the sit-in movement in 1960; through the Birmingham campaign of 1963; during 1963’s “March on Washington for Jobs and Freedom”; and throughout 1965’s campaign to vote in Selma.

Born in Dothan, Alabama on November 17, 1931, Mrs. King is the Chair Emeritus of AD King Foundation, the platform in which she uses to keep the memory of her late husband alive and travels all over the world promoting Youth/Women empowerment, nonviolent social change strategies as a way of life and entrepreneurship as the center core.

In his speech at the gala, the President/CEO of the A D King Foundation, Dr. Babs Onabanjo, paid glowing tribute to Mrs. King and all the heroes of the civil rights movement.

He said: “Let us not forget the sacrifices endured by this illustrious family- the assassination of Dr Martin Luther King Jr in Memphis, the assassination of Mama King, on a Sunday morning in church while playing Our Fathers prayer, the bombing of A D king’s home/parsonage in Birmingham, the bombing of his Church Office in Louisville, Kentucky and finally his suspicious drowning without water in his lungs, in his own swimming pool which he was familiar with, rings around his neck and bruises in 1969, fifty years ago. Shall we stand for a moment of silence? May the souls of the departed foot-soldiers and freedom fighters rest in peace.”

Dr. Babs also turned the spotlights on the situation in Nigeria, “Let the world know like in the case of Nigeria – that those terrorists and their collaborators who make peace impossible will inevitably make violence or war possible – we must speak out and prevent another #ENDSARS massacre by the evil government – their day of reckoning is very near – not long – peace shall finally reign in Nigeria.”

“Nigeria must restructure with complete and absolutely full inalienable regional autonomy to avoid total disintegration. Other African countries struggling under the yoke of civilian dictatorships must realise that the time is now to return power to the people. There must be restructuring and devolution of power to the people,” Dr. Babs cautioned.

Dr. Onabanjo congratulated the young people across the world who participated in the virtual ADK Young Professional Bootcamp Conference which was held over the course of two days before the gala.

The AD King Foundation Inc., non-profit (IRS 501 (c) (3) status): is a non-violent conflict resolution entity formed to revolutionize the mindset, attitude and behavior that promote violence and war with non-violent principles, methods and direct actions. The mission is to promote youth empowerment development and non-violent social change strategies as a way of life throughout the world. The goal is to build a beloved community with "Social Justice and Entrepreneurship" as the center core.