US, Kenya press for Ethiopia ceasefire 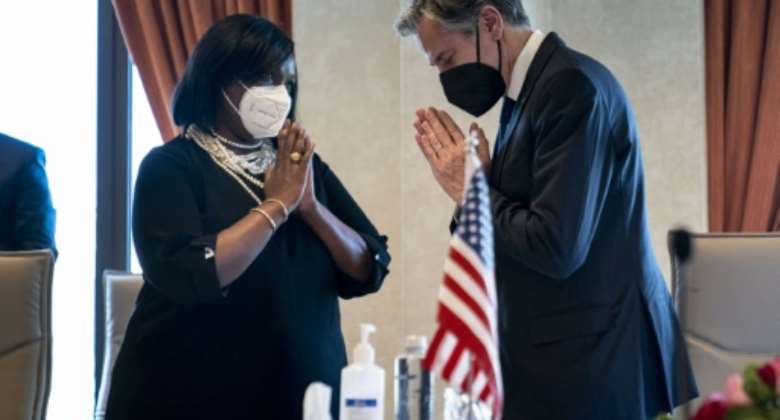 Kenya's Foreign Minister Raychelle Omamo and US Secretary of State Antony Blinken have called for a ceasefire in Ethiopia. By Andrew Harnik (POOL/AFP)

The United States and Kenya on Wednesday pressed for a ceasefire in Ethiopia, holding out hope for a negotiated solution between the government and rebels as diplomacy intensifies over the year-long war.

US Secretary of State Antony Blinken, on a three-nation tour of Africa that will take him to Nigeria and Senegal, also sounded a warning about a global retreat in democracy as he encouraged close ally Kenya to ensure free elections next year.

The top US diplomat spoke for an hour and a half with Kenyan President Uhuru Kenyatta at a meeting that was originally scheduled for 10 minutes.

"We believe in the potential of Ethiopia to find a resolution to this crisis. We believe that a ceasefire is possible," Kenya's Foreign Minister Raychelle Omamo told a joint news conference after talks with Blinken.

Blinken called for "concrete steps for peace" and a resumption of humanitarian assistance, with hundreds of thousands living in famine-like conditions as the war between Abiy's government and the Tigray People's Liberation Front (TPLF) enters its second year.

"I reiterate our call for all parties to urgently and seriously engage in negotiations on cessation of hostilities without preconditions," said Blinken, who also renewed a call for US citizens to leave the country as soon as possible.

Ethiopia has been a close US ally but the United States has been dismayed by curbs on aid delivery into the northern Tigray region which is facing a de facto humanitarian blockade according to the United Nations.

President Joe Biden removed Ethiopia from a vital trade pact this month but has stopped short of sanctions, hoping to give diplomacy a chance.

But in response to a question, Blinken did not rule out the United States eventually declaring that the "atrocities" in Tigray amount to genocide.

"Regardless of what we call it, it needs to stop and there needs to be accountability," he said.

Biden has promised new attention to Africa, in the fight against climate change and Covid-19, as he tries to draw a distinction with rising rival China which has pushed infrastructure in the continent and makes no fuss about democracy.

In symbolic signs of the challenges, Blinken's motorcade travelled near a road being built with Chinese funding and he held his news conference in a hotel where a room was reserved for the Kenya China Chamber of Commerce.

Pointing to the 50 million Covid vaccine doses which the United States has donated so far to Africa, Blinken said: "We've done this with no political strings attached."

"This is about saving lives. That is the only metric that matters."

Blinken, who is on his first visit to sub-Saharan Africa as the top US diplomat, also told Sudan's military Wednesday that the country stood to regain access to much-needed international aid if it restored the "legitimacy" of the civilian government following last month's coup.

"It's vital that the transition regain the legitimacy that it had," Blinken said.

"If the military puts this train back on its tracks and does what's necessary, I think the support that has been very strong from the international community can resume."

The United States has suspended some $700 million in assistance to Sudan in response to the coup, which halted a democratic transition that followed the 2019 toppling of longtime dictator Omar al-Bashir.

Blinken opened his trip by meeting civil society leaders and warning of "a democratic recession" in many nations.

"We have seen the same challenges here that we see in many parts of the world -- misinformation, political violence, voter intimidation, voter bribery."

Kenya's last election in 2017 was marred by deadly violence, although Kenyatta and his former opponent Raila Odinga have made peace ahead of nationwide polls next year.

Blinken later said: "It is critical that all parties -- the government, opposition and civil society -- work together to ensure safe and stable elections that reflect the will of the Kenyan people."

One participant in the civil society meeting, Amnesty International's Kenya chief Irungu Houghton, warned that signs were not good for the August polls.

Houghton said he saw "all the signs of a very contested and violent election" and urged America to remain vigilant and "not give Kenya a free pass" as it sought Kenyatta's leadership on the Ethiopia crisis.