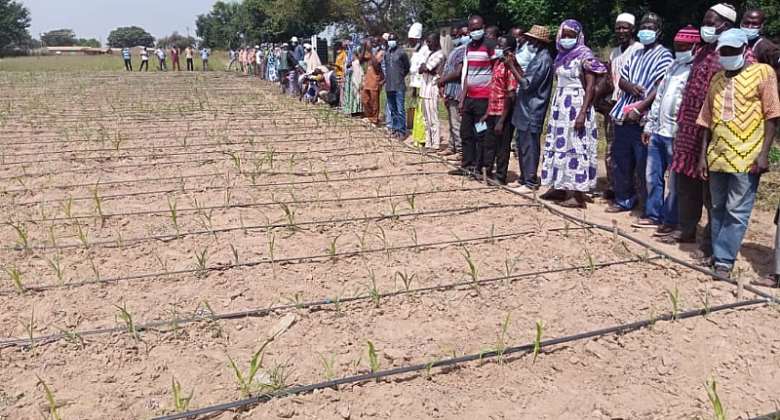 Farmers in the five Northern Regions especially women smallholder farmers will soon be relieved of the stress associated with the unavailability of improved sorghum seeds for production.

Unlike maize and soybean, sorghum is one of the crops whose seed is not on display in agro input markets for sale. It is against this backdrop that Faranaya, an agri-business company and its partners 2SCALE and CalliGhana in collaboration with CSIR-SARI, Manga in the Upper East Region are promoting the production of foundation seeds of Dorado and Kapala for multiplication into certified seed as well as the introduction of a Hybrid sorghum seed called PAC 501 in the market.

Peter Asungre, a Research Scientist of CSIR-SARI said "Sorghum seed production has not gotten the needed attention despite the crop becoming a major cash crop for the people of the Upper East Region. As such farmers continue to recycle their own seed for production. This affects production and other quality parameters required by sorghum off-takers. In an interview with ModernGhana News at Manga during a farmer filed day.

He noted that it is the mandate of CSIR-SARI to improve the availability of improved sorghum seed in the market. Thus CSIR-SARI, Manga Station is doubling its efforts to produce enough foundation seed of both Dorado and Kapaala for seed growers to have quality foundation seed for sorghum seed production.

Mr Asungre added that, CSIR-SARI is supporting Callighana an Agro input dealer in the introduction of an improved sorghum hybrid (PAC 501) into the Ghanaian market.

The performance of these three varieties was shown to over one hundred farmers drawn from Bawku and its adjoining communities alongside key stakeholders in the sorghum value chain.

Speaking to this reporter, the Senior Research Scientist in charge of the Manga station of CSIR-SARI; Dr Julius Yirzagla indicated that, the institution generates and disseminates agriculture related technologies to support farmers improve on their existing farm practices. Their research activities are centred on various crops in cereals, legumes, vegetables and root and tuber crops.

This, Dr Yirzagla said, has helped farmers increase productivity in order to ensure food security and household income. He stated that, CSIR-SARI works in collaboration with Non-Governmental Organizations and other partners such as Faranaya, Callighana and 2SCALE to execute Agriculture-related projects and programmes.

The Country Team Leader of 2SCALE Jalil Zakaria stated that 2SCALE incubates and accelerates inclusive businesses through partnerships with companies and producer organizations that want to build commercially viable food value chains in Africa based on mutually beneficial relations with smallholder farmers and other local enterprises.

He added that 2SCALE is in partnership with Faranaya to help the organisation achieve their business idea of sourcing sorghum in larger quantity and quality from small holder farmers in order to sell to its main off-taker Guinness Ghana Limited. This he said is in line with the sector change activities of the 2SCALE program.

Mr. Obed Asumkai the Manager of Faranaaya, a commercial aggregator of sorghum located in Garu outlined the objective of the company in supporting sorghum farmers within their catchment areas to access market for their sorghum produce.

Ms Avoka Lamisi a woman smallholder farmer and a participant in the field day, expressed her joy with the initiative since farming is their only occupation and since improving seed plays a major role in getting good yield.

She lauded Faranaya and their partners’ adding that, with the new varieties of Sorghum coupled with the availability of an off-taker, they will not relent in the farming business.