Tidal Waves in Keta and the Resultant Brawl in Parliament: The Afenyo-Markin, Dafeamekpor and Amoah Conundrum 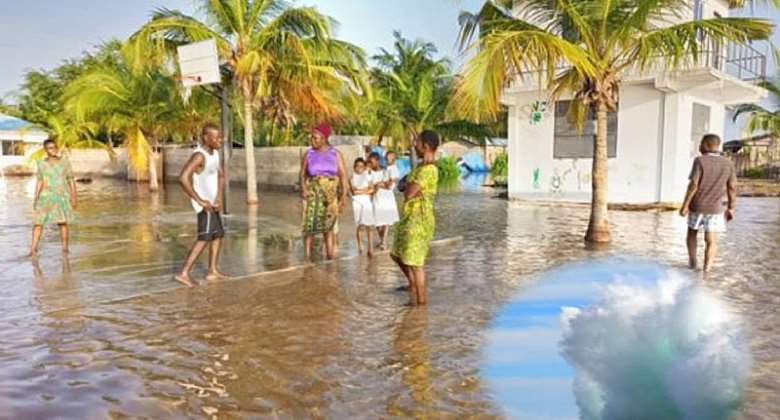 It appears to me that some Members of the 8th Parliament of the 4th Republic of Ghana resort to brawls whenever there is a serious business. The first time there was a brawl in the 8th Parliament was when the Speaker was being elected. Here we are again, there was a serious business like the ravaging tidal waves that misplaced about 15 communities and thousands of households in the Keta Municipality in the Volta Region and what we saw on the sidelines was a brawl and the near exchange of blows by some Members of Parliament.

What happened was that Dr. Stephen Amoah, the MP for Nhyiaeso and Mr. Rockson-Nelson Dafeamekpor, the MP for South Dayi nearly exchanged blows in the foyer of Parliament on Friday, November 12, 2021. Dr. Amoah was firmly backed by the Deputy Majority Leader, Mr. Alexander Kwamina Afenyo-Markin who was briefing the media indicating that the devastations of the Keta tidal waves emanated from sand winning activities in that part of the country. He sought to say that Keta people brought the effects of the tidal waves upon themselves through sandmining and its related activities. The Deputy Majority Leader supported his submission with a picture as evidence which picture Mr. Rockson-Nelson Dafeamekpor and his minority colleagues said did not depict the seashores of Keta or anywhere near Anlo land. They argued that the majority members were misleading the public and taking remedial attention from the problem at hand and the humanitarian supports required of the Government of Ghana whose business Afenyo-Markin leads in Parliament.

It is so unfortunate that instead of focusing on alleviating the plights of the people of Keta who have become vulnerable as a result of the tidal waves that hit the area, our MPs are into the usual propaganda and trivial partisan politics. In fact, what is happening in Keta does not call for cosmetic measures that will scratch the surface of the root cause of the problem. What we need is a lasting panacea to the problem to serve as a complete relief for the people. It is time for swift action necessary to bring relief to the people and not time for lawmakers and representatives of the people to aim at throwing blows or be engaging in conundrum of a sort. I always say that Ghana should go learn sea defense from Egypt and stop the usual alignment of igneous rocks along our seashores. Ghana’s sea defense walls do not last at all.

Turning to Afenyo-Markin’s sandmining effect allegation, one may ask that even if this was true, is the Government now becoming aware? The Keta Municipality has a Municipal Chief Executive (MCE) who should have been aware that the people were into sandmining and he should have stopped them long ago. What do we see nationwide? The district assemblies are not well resourced financially so they tend to endorse even illegal activities by collecting revenue from the proceeds of illegal sandmining.

There is river sandmining going on in the Volta River in communities such as Mepe, Battor, Torgorme, Aveyime, Devime, Tefle, Sokpoe and even Sogakope where there is a bridge across the river. There are DCEs in these areas and they collect daily revenue from this illegal activity despite its devasting effects.

Parliament works through the committee system and these MPs including Mr. Afenyo-Markin himself tour the country periodically. How come they are not able to stop the sandmining in Keta which Mr. Afenyo-Markin now claims is the cause of the community displacement effects of the Keta tidal waves. If this is true, must the MCE who is the President’s eye in the Keta Municipality not resign? Must the Volta Regional Minister also not answer some questions?

To say that the Keta problem emanated from sandmining rather points to the fact that Mr. Afenyo-Markin and his colleagues at the helm of the country’s governmental affairs are rather neglecting their preventive duties and reacting in despair to a devasting problem on our hands.

If the Akuffo Addo Administration could dispatch soldiers and police officers to Ketu South to ensure that Togolese did not participate in Ghana’s voter registration in 2020, how come the same Administration could not deter sandmining at the shores of Keta by dispatching heaving security to the area? Which of them will lead to loss of lives and properties; a Togolese voting in a Ghanaian election or tidal waves displacing communities due to sandmining?

In any case, has one Administration after the other not dispatched security forces to fight Galamsey in mining communities across the country with huge expenses from the public purse yet the problem lingers even in the face of high turbidity levels in our major rivers? This type of trivial propaganda and tribal politics must stop in our country. Our MPs can do better than engaging in brawls in the face of a calamitous situation.

Tidal waves are natural phenomena. Wikipedia defines a tidal wave as an exceptionally large ocean wave, especially one caused by an underwater earthquake or volcanic eruption.

A Social Anthropologist, Firth (1938) said, “man (human being) is not a plastic object on whom the environment works its will. Rather, man is a geomorphologic agent, occupying areas of the earth, not passively but as an active factor in change.” This means that once we know that Keta and its environs are tidal wave- prone, Government must put proactive measures in place to deal with such disastrous occurrences. These were the reasons for which the legendary Kwame Nkrumah established the Contingency Fund in 1961. We must not sit helplessly like Firth’s plastic objects on whom the environment must work its will.

After all, natural human behaviour follows the guide that in the face of adversity or danger, there is an irrepressible instinct to survive and human beings are likely to strive for survival. It is this type of adrenaline that must persuade our MPs into taking remedial action to swiftly alleviate the plights of Keta and Kedzikorfe people and not brawls.

Perhaps the worst agitator in the melee was the MP for Nhyiaeso, Dr. Stephen Amoah who used an unprintable Hausa word (danduruwa) and Mr. Dafeamekpor also responded by saying sheegey. Is this how low MPs can go in their bid to find solution to the catastrophic effects of tidal waves in Keta? Politics of insults and mere propaganda are part of the germane factors that deviate us from solving societal problems on time. Our MPs should sit up and do better. We need responsive and timely solutions to societal problems and not the trade of insults in the face of adversity.