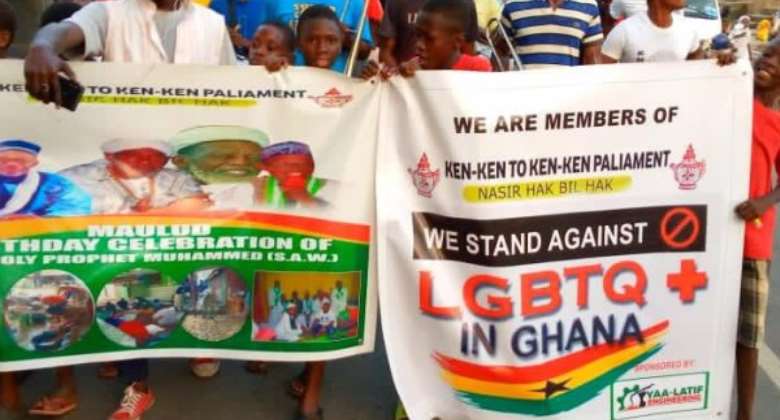 Alhaji Yahaya Cessey, Chief Imam of Wangara Mosque in Obuasi, has called on Ghanaians to stand up and speak against the introduction of homosexuality in the country.

He said the attempt by some few people to force the Lesbian, Gay. Bisexual, Transgender, Queer and Intersex (LGBTQI ) culture and practice in Ghana should not be allowed since it could destroy the morals and culture of Ghanaians.

Alhaji Cessey made the call when he joined a Muslim youth group in Obuasi, known commonly as ' Ken-ken to Ken- Ken Parliament ' to undertake a route march against the introduction of LGBTQI practices in the country.

The occasion was also used to mark the celebration of the Mawlid, (the birth of Prophet Muhammad).

Likening the introduction of the LGBTQI culture to Biblical Sodom and Gomorrah, the Muslim Cleric said it was a calamity in waiting for the country.

"I would want people to cast their minds back to an incident in the Bible where God destroyed the people because of same-sex relationships.

"This calamity might befall any society that accepts LGBTQI," he stated.

In August 2021, eight Parliamentarians jointly submitted a private member's bill to push for the criminalization of LGBTQ activities in the country.

The proponents also want the promotion, advocacy, funding and acts of homosexuality to be punished.

Reflecting on the birth of Prophet Mohammed, Alhaji Cessey said the Qur'an had described Prophet Muhammad as the noblest and pious human being sent as a blessing to the world hence Muslims all over the world should emulate his lifestyle.

He advised parents to prioritize the education of their children, adding that secular education was key in building the human capacity of Muslim Youth.

Alhaji Cessey cautioned the Youth against crime and all forms of violence, saying Islam stood for peace.

Mr Massawudu Tahiru, Chairman of the 'Ken-Ken to Ken- Ken Parliament", organizers of the programme, said the group, in its 10 years of existence, had contributed to promoting the interest of the Muslim youth.

He said the group had so far led the construction of Mosques at the Obuasi government hospital and the Obuasi Senior High and Technical School as well as organising the youth to clean their communities.

Mr Tahiru said the time had come for Muslim Youth, especially those in the Zongo Communities, to pursue education to the highest level.

"Hitherto, most Zongo children had little interest in secular education but with groups like ours springing up, the dynamics are changing now," he said.

He also called on Parliamentarians to vote massively for the Anti-LGBTQI Bill.

IMF bailout: Free SHS, other programs must be redesigned– Se...
5 minutes ago