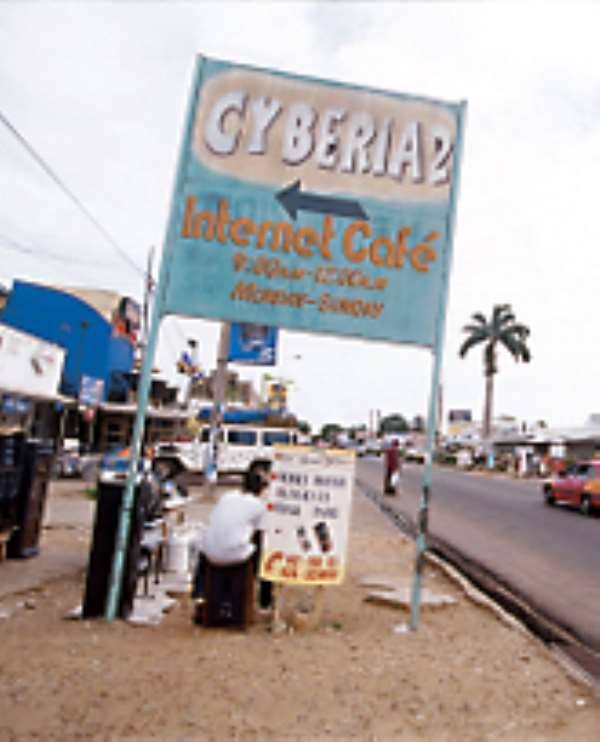 A visit to many Interest cafes in Accra revealed scores of people shuttling the cyber centres to mainly browse the net. This has created a lucrative business for operators while patrons derive the commensurate benefit since they employ the device to engage in various meaningful transactions.

The number of people who patronise a cafe particularly depends on the size and efficiency of that particular cafe. Most people prefer faster Internet cafes. To make it fast depends on a number of factors, such as the use of bandwidth or dial-up modems, with the latter being the fastest.

It has been established that using the wireless method, which includes V-sat and fibre optics, is more expensive but provides a faster and more improved service than using the dial-up, which is less expensive but makes the system slow.

Using a dial-up modem involves using a telephone line to connect your computer with the server of the Internet service provider (ISP). Here, the cost of operating the Internet is directly linked to telephone charges and the subscription fee to be paid to the ISP.

For the smaller cafes, some of which are powered by only four computers, attendance depends mainly on the location and the extent of the cluster, since they have no unique advantages due to their predominantly slow nature.

Children are equally benefiting from the new craze. They visit the cafes often after school hours to engage themselves in sending mails, looking for pen pals as well as playing games. However, a very limited number of them use the device to do any extensive academic research.

According to the Managing Director of Ghana’s biggest Internet cafe, BusyInternet, Ms Estelle Akofio-Sowah, most of the people who visit BusyInternet are aged 12 years and above and use the facility for various things, including sending mails, applying to schools abroad, sending data in big volumes, watching the latest movies, listening to music and chatting.

Master Michael Amo, 15, a junior secondary school Form One pupil in Accra, is a cafe freak, who shudders to close the day with at least 15 minutes of browsing. He saves part of his daily pocket allowance to buy units for his new found “companion”. The units sell between ¢5,000 and ¢8,000 per hour.

Young Michael visits the big telecentres where he sends mails to friends and “mail pals”, applies to schools abroad for possibilities of distant courses and plays various games, such as Hercules, Sinbad and FIFA World cup as well as solve some difficult problems he could not deal with earlier in school.

The team also spotted Fred Mack Johnson, a Sierra Leonean, at one of the cafes with his 10-year-old daughter, Marymack Johnson. Little Marymack had sent a mail to her Ghanaian mother in the United States and was taking some lessons from her father as to how to type and use the Internet.

She told this team that she was very happy to be using the Internet for sending mails, watching movies and playing games.

BusyInternet runs a special programme for kids on Saturdays and the well-trained attendants of the cafe take the children through various lessons in the general use of the Internet at reduced cost.

The team also met Miss Emelia Appiah, a nine-year-old pupil of the Bread of Life Internet cafe at Teshie and her mission there was not different from all other kids we met at the various cafes we visited around Dansoman, Achimota, Adabraka and Bubuashie. She was checking and sending mails, playing games and inquisitively browsing other sites of interest to children.