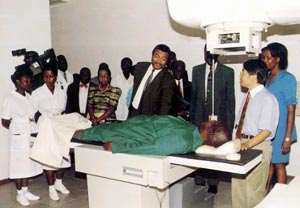 The plight of Ghanaian doctors at times make me feel like crying. Their case is so pathetic because governments upon governments have taken the invaluable services rendered by the country’s hardworking doctors for granted. They have been so marginalized, that being a doctor in Ghana is becoming a thankless job.

Due to the lack of appreciation for their services, many doctors have reluctantly left the shores of Ghana, to seek greener pastures elsewhere. Many of these doctors made the painful decision to leave Ghana even though they are very much aware of the dire need of their services. In spite of this neglect by state authorities, there are many Ghanaians who sympathize with the plight of these doctors.

Doctors have not fared better under any administration in Ghana, be it military or democratic. All governments have glossed over the plight of the country’s brilliant, hardworking doctors and promises upon promises have gone un-honored.

During the P(NDC) era, the needs of the doctors were ignored with impunity. As a result, many doctors left the country out of frustration and pain believing that the government did not appreciate their services. It is however important to note that doctors have been leaving Ghana to seek better conditions of service long before the P(NDC) era.

Some doctors out of the love for the country decided to braze the storm and faithfully serve the country against all odds. Those are the heroes we find in government hospitals and private clinics today.

It therefore came as a welcome relief when the NDC government finally handed over the reigns of government to the NPP government headed by JA Kuffour. Many Ghanaians heaved a heavy sign of relief that with the coming into power of the NPP government, the plight of Ghanaian doctors will finally be solved or at least reduced to the barest minimum.

President Kuffour after being sworn into office, even took the bull by the horn by announcing that the government will work out a special package for Ghanaian doctors, with the view to enticing them to stay home and render their services to mother Ghana.

Ghanaians hailed the announcement by the president since the exodus of doctors was becoming a social as well as economic problem for the country.

It is however sad to say that, two years have passed but the special package promised the doctors in front of the massive glare of the Ghanaian media by the president has become elusive. Countless reminders by the doctors to implement the so-called package have fallen on deaf ears.

One other important issue that government doctors have struggled with the Kuffour administration, to reach a compromise involves their retirement or pension package.

According to the doctors, since their salaries are nothing to write home about, they appealed to the government to consolidate their salaries and other additional allowances to boost their retirement package. This has been the story and constant song of the doctors. But to this administration, the doctors were asking too much, therefore, the issues remain in the limbo.

Out of frustration, the junior doctors at the Korle Bu Teaching Hospital two weeks ago embarked on a strike action to back home their demands for the president to deliver on his promise.

Talking about the strike brings to mind the slave salaries given to doctors working at government hospitals in Ghana today. Readers need not be reminded that doctors spend six invaluable years of their lives to train to become doctors.

On paper one will be forced to say that what the doctors are earning is just fine. But when you take into consideration the number of years in training, coupled with the long hours of work, limited working facilities and equipment, you will agree with me that Ghanaian doctors deserve something better.

The strike action embarked upon by the doctors out of frustration with the NPP government gives an indication that once again, another government is totally ignoring the welfare of doctors, a situation which will further aggravate the mass exodus of doctors and other health workers from the country.

Meanwhile, emerging information from the parliamentary corridors of Ghana is stinking to the highest heavens. The report, first published last year said that a new Mercedes Benz E50 has been purchased for the speaker of parliament, Peter Ala Adjetey.

Under normal circumstance this should not have been news, but for the whopping amount involved. The report which was confirmed last week states that the car cost taxpayers $90,000 (810 million cedis).

This is the same man who was involved in another Mercedes Benz car flap two years ago. I remember at that time he was given a Mercedes Benz car with a diesel engine. This man who was just appointed to parliament unlike the rest who have to campaign and win the mandate of their electorate to get there, flatly refused the diesel car and requested a Benz car that uses petrol.

I have been cracking my brains to find out why Ala Adjetey will force the country to cough a whopping 810 million cedis to buy him a single car for his official use in this time of belt-tightening in Ghana.

It is worth nothing that the amount of that car is capable of paying one-month’s salary of more than 506 junior doctors in government hospitals.

Apart from Ala Adjetey’s greedy lifestyle, ministers of state are riding in SUV’s that cost between $40,000 and $50,000 in addition to drawing free petrol, while doctors who save lives and limbs to keep the nation’s population going are virtually starving with their families.

Besides, the dollar-pegged salaries of the numerous special appointees without any special skills could be used in improving the lot of doctors and other health workers.

I know NPP sympathizers will jump on me for daring to criticize the government in this article, since any critique of policies of the government is not taken in good faith. But no one can deny that all these critical issues are the realities on the ground.

Ghanaian, including me gave their hearts to the NPP government to push out the past NDC government. We wanted to give the NPP government a chance. Make no mistake, when President Kuffour came to “The Center” in New Jersey, United States, to raise funds for his presidential bid I was there and donated to his cause.

How can Kuffour tell the whole country, that Ghana is broke and therefore is not able to deliver the special package promised to doctors, when one individual is made to ride in car that cost a whopping $90,000. If past governments took hardworking doctors for a ride, the NPP government must do better than that.

It is two years since doctors were promised the handsome special package by the president. A well-known adage says time like tide waits for no one. If there is any time to let Ghanaians believe that this administration cares about the plight of doctors and the health of the nation, readers, this is the time.

Fine promises without action has the capability of breeding mistrust. Therefore, President Kuffour should tell the doctors something now. Anytime doctors embark on a strike action, it is the poor masses that suffer the most. The poor masses always bear the brunt of the action because the rich and famous can always travel outside or pay for expensive health care.

In Switzerland, three professionals are considered the most crucial. They are doctors, teachers and farmers. The role of doctors is highly recognized and appreciated in Switzerland.

I will recommend to this administration to do the same thing by adjusting the salaries of doctors effectively sooner than later. If junior doctors are paid 5 million cedis and senior doctors 7 million cedis monthly, this will not be too much for the country.

If the country can afford plenty SUV’s for ministers who draw their ministerial salaries in addition to their parliamentary salaries, then it can afford to pay reasonable salaries to doctors. After all, how many doctors do the country has? They are less than 2000 nationally.

The nation needs the services of its health workers and other professionals. There is therefore, the need to put in the right measures to retain their services within the country.

I will end this article by saying, “Mr. President, please back your promises with action by giving doctors what they deserve.” The time to act is now.