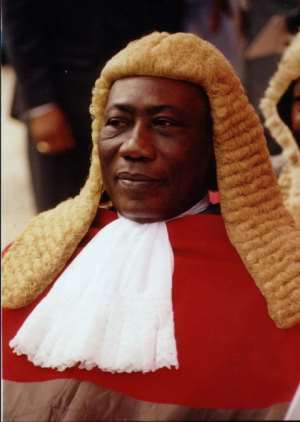 There are many disturbing issues in this Wulensi saga. First, it is not clear why only 7 justices were empanelled to hear the review, contrary to a specific writ issued by Nyimakan and the Chief Justice's own policy directive that all justices be empanelled to hear constitutional cases.

Since it is probably the case that the original 5 judges were not going to change their mind, adding 2 more justices made nonsense of the review process. That is, the best Nyimakan could do was to get the 2 new Justices to vote against the original majority and this will still have made it a 4-3 decision against him.

Second, I am deeply concerned that the Chief Justice (CJ) has arrogated to himself the power to decide which Justices will sit on which case. This is a very dangerous development because it can lead to opinion shopping by the CJ. That is, the CJ can determine the outcome of cases by merely selecting Justices who are sympathetic to his view of the law. This opinion-shopping outcome was neither anticipated nor sanctioned by the constitution. The constitution merely asserts that the quorum for hearing a case is 5 justices (article 128 (2)). That means, at least 5 justices must sit on a case, which is not the same thing as saying that 5 justices must sit on a case. Nor, does it imply that the CJ has the power to freeze the voices of his any of colleagues, as is currently happening. When it comes to adjudicating cases, the CJ is merely primus inter pares (first among equals). He has as much say as the other Justices. Absent very compelling reasons, ALL justices must sit on all constitutional cases, especially ones that are as important as setting aside the decision of voters! As an aside, it is also the CJ who decides which cases get heard and this is a power that CJ Wiredu is appearing to abused in a case that I filed a year ago challenging the CJ's swearing in of the Speaker!

Third, even though this is not an NPP vs. NDC matter, only the blind will fail to see that an NDC MP was being disqualified. That being the case, why were 4 recent appointees of President Kuffuor (Afreh, Baddoo, Twum and Brobbey) assigned to the case? I am not arguing that their decision was biased but the appearance of an impropriety is too glaring to ignore. Why not Ampiah, Kpegah, Adjabeng, Addo, Atugubah?

Fourth, could a different outcome be reached if a different set had been empanelled? Maybe or maybe not! But why must I go to the Supreme Court (SC) to ask a question and at the end of it all be doubtful as to whether a subset of the SC would have answered the question differently? Did I ask the question of the SC or a subset of the SC? In other words, what are the thoughts of the “disenfranchised” justices on this question?

Fifth, it is becoming scary that our SC has developed this bad habit of levying fines against people who seek to use the judicial forum to settle their disputes. In the extant case, the court levied a fee of 13 million cedis against Nyimakan. This practice, which encourages extra judicial settlement of disputes, must stop forthwith. The constitution grants access to the courts and the SC must not be allowed to disturb this access via their punitive and arbitrary fines, reminiscent of the arbitrary filing fees introduced by Chief Justice Wiredu!

Finally, it is now time to reform the SC by amending the constitution to put a ceiling on the number of justices and making it clear that all justices will sit on all constitutional cases. Further, which cases get heard and at what time must be determined by a rational process. Certainly, when a litigant claims, as I have in writ 3/2002, that the CJ has violated the constitution, it must not be left to the discretion of that same CJ to decide when or if the case will be heard.

The 1992 constitution attempted to make the SC independent by emplacing many mechanisms, including shielding the court's budget from executive and legislative “raids” (article 127). However, today, very few can assert that our SC is independent. The court is clearly not independent of the executive since the latter can appoint justices at will (so called court packing). The court is not independent, because the CJ, who has unconstitutionally usurped the right to determine whose voices will be heard on the court, can unduly influence the outcomes of cases.

We must do better. The Wulensi battle is over! But the battle to reform the SC has just started!