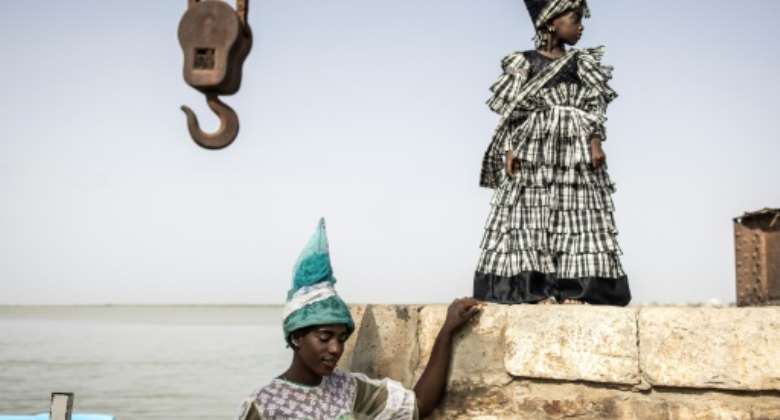 Aminata Sall, who rents out brilliantly coloured dresses in the Senegalese city of Saint-Louis, systematically quizzes her clients about their motivations for the prized cultural heirlooms.

Kept in a storeroom near her office, the gowns represent a now-vanished group of mixed-race merchant women known as the Signares.

"If it's just for show, I won't rent them to you," Sall says, recounting how she once rejected a bid by a university professor hoping to hire some Signare-style dresses.

The Signares were a colonial-era class of female traders of gold, ivory and slaves who once strutted their wealth in West African trading hubs -- in magnificent spangled dresses and conical hats.

At their height, they were powerful commercial brokers in Saint-Louis and further south on the island of Goree, developing their own unique Euro-African hybrid culture.

They have since faded away, but their glamour lives on in folk memory.

Today, women wearing Signare dresses are in demand at business or political events in Saint-Louis, once the capital of the former French colony of Senegal.

The Signares' ties to the slave trade are either unknown or pass largely without comment.

Sall, a museum curator and member of a history association that has about 100 replica Signare dresses, warned that flippant use of the robes represents a "loss of meaning".

The Signares emerged during the early years of settlement when European traders would take native wives. By JOHN WESSELS (AFP)

"I think people forget or pretend to forget," she said.

"People have to understand that they played a big role -- like the colonisers."

French traders founded the city in the mid-17th century, on an island on the mouth of the Senegal river, and it quickly became an important hub.

The Signares first emerged during the early years of the settlement, when European traders would take native wives.

Marrying locals was frowned upon, and condemned by the Catholic Church. But the common practice afforded African women and their mixed-race descendants opportunities for social advancement.

From the 18th century, the businesswomen would promenade through Saint-Louis wearing their vivid dresses to flaunt their wealth. By JOHN WESSELS (AFP)

Through inheritances and shrewd business acumen, these women ended up building considerable fortunes in their own right, including by trading in slaves.

Accounts from travellers during the heydey of the Signares -- from the 18th to mid-19th centuries -- describe a thriving female bourgeoisie in Saint-Louis.

At set times during the day, the businesswomen would promenade through the city wearing their vivid dresses to flaunt their wealth.

Aissata Kane Lo, a researcher at Saint-Louis' Gaston Berger university, described the Signare phenomenon as a novel way of life "that had nothing to do with Senegalese tradition".

But from the middle of the 19th century onwards, with the abolition of the slave trade and French restrictions on local commerce, the Signares disappeared.

Some are nostalgic for the old times, Aissata Kane Lo said.

Demand for the dresses has been a boon for tailors in Saint-Louis who can replicate the style. By JOHN WESSELS (AFP)

Marie-Madeleine Valfroy Diallo, a journalist and actor, is one such person. In 1999, she revived the "Fanal" festival, a custom that once saw the Signares march to Midnight Mass by lantern light.

Today, women dressed as Signares for the festival shimmer in the procession alongside other festival-goers in traditional Senegalese garb.

Their dresses are of another era -- puffy below the waste, adorned with ruffles and lace, matching headdress and shawls.

Diallo, 77, said the popularity of Fanal is such that she is now regularly asked to "send us some Signares" by people throwing parties, or organising business events.

Demand for the dresses has been a boon for tailors in Saint-Louis who can replicate the style.

Awa Marie Sy, who models for one such dressmaker, said she felt proud to wear the outfits.

"These dresses were worn by our grandmothers, who were like queens," she said.

Ariane Reaux, who owns a hotel with rooms named after famous Signares, and has hosted conferences on the women, said there was a broad fascination for the singular culture of Saint-Louis centuries past.

The dresses are of another era -- puffy below the waste, adorned with ruffles and lace, matching headdress and shawls. By JOHN WESSELS (AFP)

"There's a lot that people don't quite understand," she admitted, but noted that the Signares are part of Senegal's heritage.

"It's all part of a history between France and Senegal. Nothing like this has ever happened anywhere else".

Aminata Sall, the museum curator, insisted the complex reality of the Signares should not be glossed over.