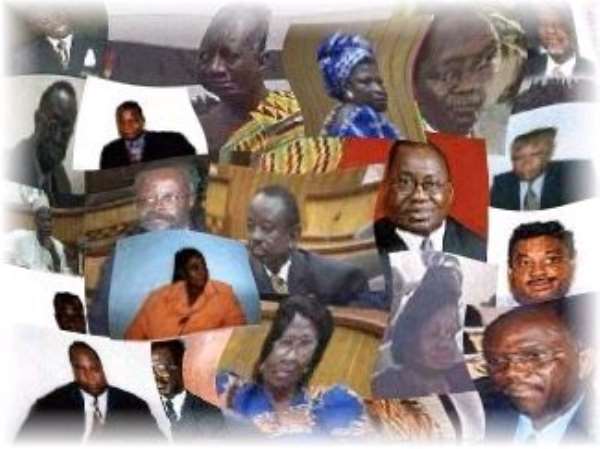 “What is all this talk about a ruined economy? We never built any sense of an economy under Nkrumah/CPP, NLC, Busia/PP or NRC/SMC. Consequently, there was nothing for Rawlings/(P)NDC to ruin. One can only wreck what has been built. Let’s help NPP build a sustainable economy and stop the sleep talking."

-- Ghanaweb "Quote of the Day"”
Emerging Kufuor Tactic is to blame Rawlings/NDC for all economic woes. Blame everything on Jerry John Rawlings & NDC. That's the long pass President Kufuor and his NPP are throwing as the clock ticks toward their third year with a sagging economy and increase in cost of living.

The HIPC rhetoric headlined the Kufuor government’s public relations offensive on the economy. Many NPP sympathizers and media mongrels, seeking favors from the current government, always make a pathetic attempt to implicate Rawlings/(P)NDC in the current state of affairs, suggesting corruption, lax oversight and a permissive attitude during the previous administration. What they all refuse to mention is that, the Rawlings years, saw the largest economic expansion of the post-Independent period (OECD/World Bank /IMF).

While Kufuor's team blames Rawlings for the economic mess, the NPP are taking credit for NDC's successes. If Rawlings is to blame for economic shortcomings, then he should also give him credit where it’s due.

Rawlings/(P)NDC are not the only reason for our current predicament. All previous governments – both military & civilian - have had a hand in our current demise. The rot in Ghanaian society started Nkrumah regime and perpetuated under Acheampong and Rawlings. By the late 1970s, I had given up on Ghana, because Ghana became a kind of George Orwell's Animal farm where we were being sold all kinds of falsehood as nonentities continued to misrule Ghana.

Most of us (including yours truly) “swallowed” the HIPC excuse: NDC left no money in the coffers, so we had no choice but to declare Ghana a Highly Indebted Poor Country (HIPC).

It all sounded genuine until an independent and opened mind Ghanaian takes a careful look at the record of the current administration. Here are a few questions that demand full and complete answers from the president. If, as Kufuor’s administration claim, our coffers are empty, much emptier than when JJ took over 20 years ago, then

Blaming your predecessor is hardly novel. Presidents all over the world often claim credit for the good times and try to shift responsibility for the hard times.

The US is a very good example. Ronald Reagan blamed Carter for the weak economy of 1980, when interest rates topped 15 percent and inflation approached 13 percent. Carter leveled similar criticism four years earlier. Clinton made the economy the top issue in his 1992 defeat of the first President Bush. Once in office, he accused his predecessor's budget office of cooking the books to hide the magnitude of the federal deficit. The current Bush White House has blamed Clinton for other problems, too. Some officials have even suggested the two-term Democrat's efforts to prod an Israeli-Palestinian peace settlement helped fuel the recent Mideast violence.

Ghana is not USA. The USA can afford the blame game, but can we?

Will voters buy the blame-Rawlings strategy?
All of the political polling experience has been that the man in the castle gets the glory or the blame at the time things happen. I am not sure the Ghanaian public is blaming Kufuor or Rawlings. It's more that they want something done about this, and turning to Kufuor because he's the president and Rawlings is not.

Ghana would be better served if President Kufuor and his administration stop wasting time blaming the NDC and got on with delivering their election promise.