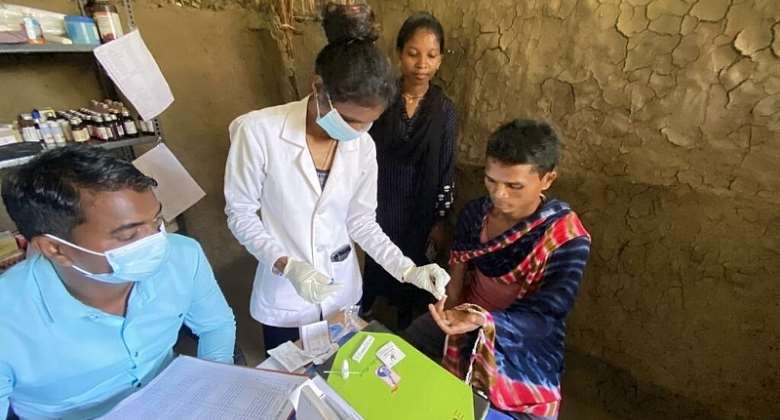 Covid-19 vaccination drives in the tribal heartland of central Chhattisgarh, which was initially handicapped by the Maoist insurgency and the remoteness of the region, has gradually picked up pace through a mix of initiatives.

Despite the inhospitable terrain and with the indigenous tribals already in the crosshairs of the Maoist conflict, it would be incredulous to think that medical services are trickling down in some of the remote villages of this forested state.

Much of the state's problems can be attributed to its formidable terrain, wracked by backwardness and misery where development or providing services has been absent in many years. The forest area alone covers over 40 % of the total geographical area of Chhattisgarh.

Along with a substandard medical ecosystem, lack of testing facilities in villages, and rampant misinformation, the issue of shortage of medical staff is a major hurdle in the state's battle against the pandemic.

But campaigns in the last year are slowly helping.
Fallen off the map
Access to many villages in the rebel-affected Sukma district itself is an arduous journey as it is located in the dense Dandakaranya forests and is still a no-go area for many despite the presence of a security camp.

“Due to misconceptions and also that tribal communities were unapproachable, it has taken time to win trust and confidence,” Raja Parayan, a local health volunteer told RFI.

Many volunteers, mostly locals, are now part of COVID-19 tracing teams whose task is to track down positive cases near check posts at the border, identify from where patients are coming and with whom they have come in contact recently.

“Many thought the disease was a conspiracy and it took a lot to convince them that it could kill people,” said another volunteer.

While vaccine hesitancy and inaccessibility have challenged the Covid campaign, there has also been the push by a collective of NGOs, local networks and 'mitanins' (health volunteers) to persuade a wary and hard-to-reach population.

“I was scared of what this injection will do but these health volunteers convinced me about the effects of Covid,” Praila Sahu, a villager told RFI.

“Changing mindsets and behaviour patterns has been tough among the indigenous population and it is a real challenge,” Vishal Vaswani, a UNICEF official told RFI.

Chhattisgarh's official COVID-19 infection count is over 1 million, while the death toll stands at more than 13,500. The overall pace of vaccination has been slow due to difficulties reaching all parts of the conflict-prone state.

Some officials have pointed out that 14 out of the state's 27 districts are affected by civil strife, hindering the vaccination campaign.

There is still a long way to traverse but a confident beginning has been embarked on in some the country's inhospitable areas.