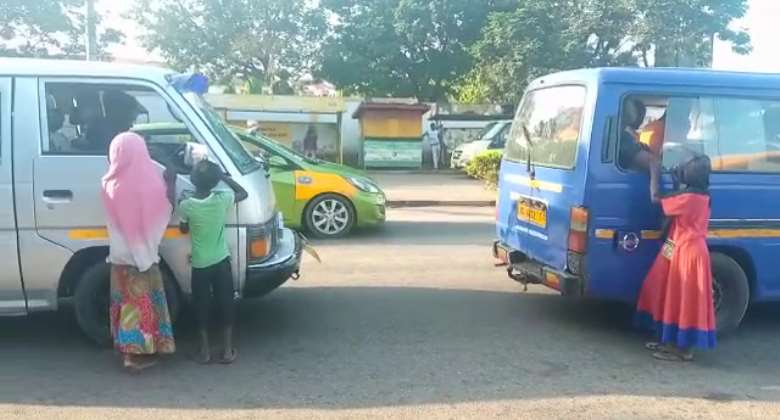 Residents in Kumasi Metropolis are faced with the invasion of some alien child beggars in the city as the authorities look unconcerned.

According to the residents, their presence threatens their security since the beggars have resulted in harassing people on the streets in begging for alms.

The beggars, in their hundreds, are believed to have been migrated from Mali, Burkina Faso, South Sudan, Chad and Niger.

These strangers are mostly found at the Central Business District (CBD) in locations such as Adum, Bantama, Tech Junction, Dr Mensah and around the Kumasi Kejetia Market.

Some pedestrians told this reporter on Wednesday, November 10 the situation is embarrassing as these child beggars always crisscross them on streets.

They added that some of the child beggars have become very aggressive to the extent of pulling the dresses of people on the streets for money.

For the vehicle owners, these child beggars annoyingly bang on their car windows in traffic to beg for money.

"We are calling on the Ashanti Regional Coordinating Council REGSEC to expedite action to clear these beggars from the streets of Kumasi, their presence is a nuisance to us.

"They pose a health risk to people as they have flouted all COVID-19 protocols in their quest to get money on the streets," a pedestrian stated.

Some traders at Kejetia and Adum disclosed that over 500 children below the age of 6 are seen in every corner begging for alms every day.

“It is unfortunate that nobody seems to care about the activities of the kids on our streets, and the earlier the authorities resolved the issue the better it would be for the country,” Kwabena Manu told OTECNEWS.

According to Agyenim Boateng, these migrants have also besieged mosques in the Kumasi metropolis, especially the Kumasi Central Mosque, where most perch.

Some of the drivers who spoke to this reporter raised concerns about the presence of minors on the streets who are often knocked down by motorbikes.

The manner in which these kids run after speeding vehicles on the streets distract drivers.

Reacting to the issue on OTEC FM’s Breakfast Show, dubbed ‘’Nyansapo”, the Ashanti Regional Immigration Public Relation Officer, ICO Abugrabo Elijah said they’re also worried about the situation noting that the situation is a national issue and must be dealt with in a holistic manner.

According to him, his outfit was working in collaboration with stakeholders to ensure the appropriate removal of beggars from the streets as soon as possible.

“There should be a holistic and strategic plan to be able to get them off the streets,” he emphasised.