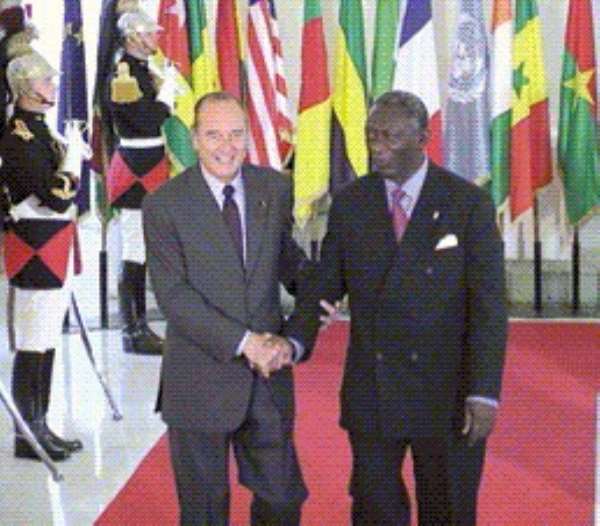 But for the dire need to ensure that peace returns at all cost to our neighbours in Cote d'Ivoire, the news story in the Daily Graphic of Tuesday, January 28, 2003, under the caption 'President Saves Ivorien Peace talks', would have passed without comment.

It may appear harmless or even meritorious to the uninitiated. Yet in diplomatic circles, many people would bow their heads in shame for the unethical revelation of what was alleged to have transpired at a closed-door meeting to broker peace for the people of Cote d'Ivoire.

It is expected that everybody who was a party to the Paris meeting would leave with a sense of sobriety, praying that whatever decision taken would be accepted to the rank and file of the various factions. And when that happened, prosperity would praise the team for their historic feat. So it is unfortunate that the government spokesman, Mr. Kwabena Agyepong, has come out singling out his master as the only sensible person who saved the situation.

According to the Daily Graphic, Mr. Kwabena Agyepong in narrating how his boss achieved that success said 'Mr. Ouattara had insisted that the post of Prime Minister should be reserved for his Rally For the Republican Party (Party).

President Kufour advised the former Prime Minister to learn from his experience in Ghana where he stayed in opposition for decades before he was finally elected to lead the country in “peace but not in pieces.”

He said Mr. Ouattara could be appointed a Prime Minister but he would preside over a nation in turmoil.

About five minutes after President Kufour's advice, Mr. Ouattara backed down and later thanked the President for his intervention.'

The above report is just tantamount to self-aggrandisement and depicts lack of maturity on the part of the government team that attended the summit. It turns to show that without President Kufour consensus would have eluded the summit.

For good interpersonal relationship, it is always adviseable to let nobody feel less important. Most especially, when a team resolves a problem or succeeds, it is the team that takes the credit not an individual.

It is also unfair to portray that Mr. Ouattara just took five minutes to respond to the words of reason from the 'saviour'. Yet, Ouattara represents a faction whose collective decisions before coming to the summit he must take into consideration. On the other hand, those words from our president cannot be new to a former Prime Minister, but instead, he would not want to betray confidence and for that matter risked taking a unilateral decision without consulting his people. He should have been commended instead of being portrayed like a pawn.

Moreover, indications are that some Ivoriens are still not happy with the decision arrived at in Paris. Does it not therefore cast aspersions of naivety on our government and therefore proves it immature to be invited to negotiations of such a nature?

In taking credit for the consensus, the government spokesman has also forgotten one thing. He has forgotten that Mr. Kufour made a boom speech prior to the 2000 elections and only God knows what would have happened if the NPP had not won the elections. Please people could refer us, so we need to remember the past often not to pretend we are angels whilst others are devils.

My piece of advice for our president is to restrain his men from being in haste to score cheap political points at home. For, such moves rather end up exposing the government to international ridicule, since the president's ability to give wise counsel would first be sought from what pertains in his own country.

In view of the present crisis in Dagbon where the president's wise counsel is most needed but he gives excuses to visit and the fact that, today, things are falling apart with almost every group (e.g. lawyers, taxi-drivers) in one way or the other trying to impugn the efficiency of the government, no subterfuge would help.

At least, we expect that if things are not going on well for us, our international reputation and pride should stay intact.