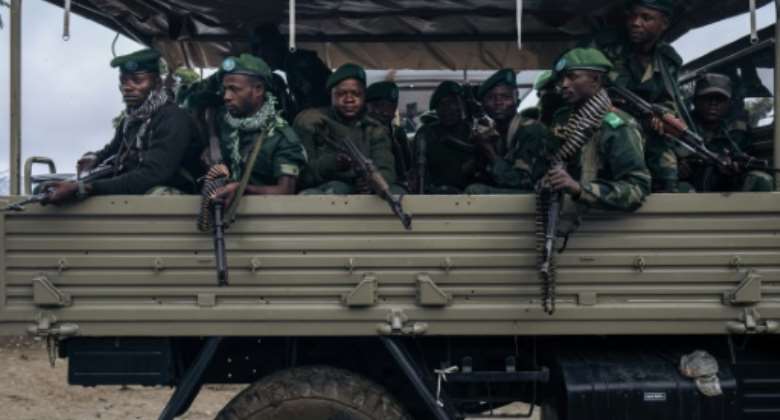 The armed forces are struggling with scores of armed groups in DR Congo's troubled east. By ALEXIS HUGUET (AFP)

DR Congo's army said Tuesday it had driven out suspected insurgents from positions they had seized near the country's eastern border.

In Geneva, the UN's Refugee Agency said the clashes had triggered an exodus of some 11,000 people into neighbouring Uganda.

The military came under fire overnight Sunday in an area around 80 kilometres (50 miles) from Goma, the capital of North Kivu province.

The army blames a faction called M23, one of more than 120 armed groups which roam eastern Democratic Republic of Congo -- a legacy of regional wars more than two decades ago.

"We have recovered the entire zone, we have dislodged the enemy and I was able to spend the night in Chanzu" with soldiers, Colonel Honore Rindugu, a battalion commander, told AFP.

"I'm heading for Runyoni Hill to set up soldiers there," he said.

"We took back all the hills by yesterday evening, including Runyoni and Chanzu," Rutshuru territory administrator Colonel Luc-Albert Bakole Nyengeke said, adding that one soldier had been killed.

"At the moment the population is returning," he told AFP.

The local administrative chief, Jackson Gachuki, said the army had recovered "all five villages" that had been captured.

"Since this morning, most of the population has returned to Chanzu, the centre of Bungana and the surrounding area," he said.

At least 11,000 people crossed into Uganda to escape the clashes, the UN Refugee Agency said in Geneva.

The number is the largest refugee influx into Uganda for more than a year, said UNHCR spokeswoman Shabia Mantoo, adding that the vast majority were women and children.

Some 8,000 asylum-seekers crossed at Bunagana town and another 3,000 at the Kibaya border point, both of which are around 500 kilometres (300 miles) southwest of Uganda's capital Kampala.

Uganda hosts around 1.5 million refugees -- more than any other country in Africa -- of which around 440,000 are from the DR Congo.

The M23 is a Congolese Tutsi group that was largely defeated after launching a rebellion almost a decade ago.

Its leadership has issued a statement denying staging the attacks.