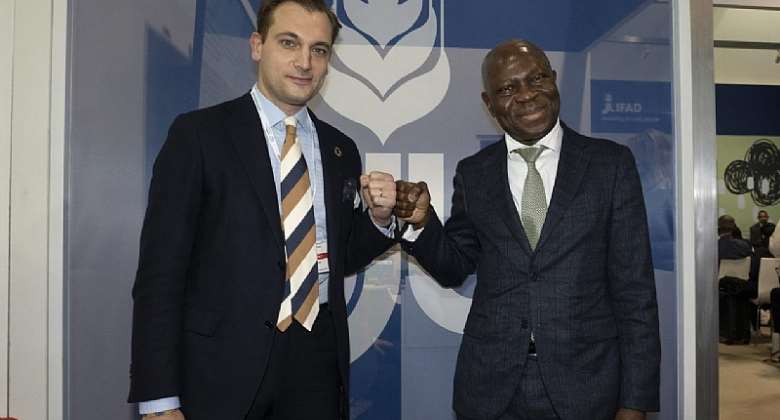 Glasgow, 8 November 2021 – Sweden today signalled its strong commitment to help some of the world’s poorest small-scale farmers to adapt to climate change, by pledging SEK100 million (nearly US$11.7 million) to the UN’s International Fund for Agricultural Development (IFAD). The announcement was made at the UN climate change conference (COP26) in Glasgow.

The commitment, made through Sweden’s Ministry of Foreign Affairs, will direct funding to the Enhanced Adaptation for Smallholder Agriculture Programme (ASAP+), a climate financing mechanism launched by IFAD in January. It is envisioned to be the largest fund dedicated to channelling climate finance to small-scale producers to help them adapt to climate change and combat hunger and malnutrition.

“For small-scale farmers, climate change is a matter of survival. We urgently need to invest more to help them adapt. If they cannot produce food, then hunger and poverty will escalate,” said Gilbert F. Houngbo, President of IFAD. “With this timely and generous funding from Sweden, we will be able to support rural producers experiencing lower crop yields and livestock deaths to become more resilient and be able to keep feeding their communities.”

“The world’s poorest farmers are the hardest hit by the impacts of climate change, but have contributed least to its cause. At the same time, efforts to strengthen agriculture and food production are critical for sustainable development. By increasing financial assistance to small-scale farmers for enhanced climate adaptation, we can support climate resilient food systems and ensure food security for the most vulnerable,” said Per Olsson Fridh, Sweden's Minister for International Development Cooperation.

While small-scale farms produce about a third of the world’s food, they are at significant risk from increasing temperatures, erratic rainfall, rising sea levels and extreme events such as floods, droughts, landslides, typhoons and heat waves.

Recent research supported by IFAD shows that the yields of staple crops such maize could decrease by as much as 80 percent by 2050 in parts of Angola, Lesotho, Malawi, Mozambique, Rwanda, Uganda, Zambia and Zimbabwe due to climate change, resulting in increased hunger and poverty. If nothing changes, climate change could push more than 140 million people to migrate by 2050.

IFAD aims to mobilize $500 million for ASAP+. The programme’s targets include: building the resilience of 10 million rural people to cope with the effects of climate change, sequestering over 100 million tons of carbon dioxide equivalents, and bringing more than four million hectares of land under climate-resilient practices. ASAP+ will focus on low-income countries that face the greatest challenges in terms of food insecurity and rural poverty as a consequence of climate change.

IFAD has already committed $300 million in climate funding through ASAP’s first phase launched in 2012. So far, more than 6 million small-scale farmers have been helped to cope with the effects of climate change across 41 countries with investments in climate-smart agriculture and nature-based solutions, improvements to rural infrastructure (such as small-scale irrigation and rainwater harvesting systems), and climate information systems.

Sweden is a founding member of IFAD and it has committed more than $476 million to the Fund since 1978. With a specific focus on helping small-scale farmers adapt to climate change, Sweden has contributed substantially to building the resilience of more 30 million rural people.