The continued tainted legacy of the NDC 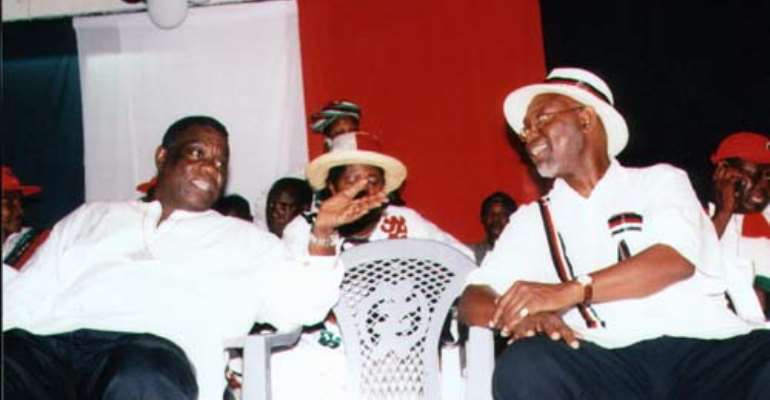 The results of the recent NDC congress attest to the fact that the National Democratic Congress is still struggling with its legitimacy as a political force in the country.

The lopsided vote in favor of Professor John Mills and against Dr. Kwesi Botchwey was a surprise to many who had followed the campaigns of these two political aspirants. Early exit polls from the congress had predicted a closer outcome although it was clear that Professor Mills was expected to win. So why did Dr. Botchwey lose by such a huge margin?

Now, it turns out that many Botchwey supporters were “intimidated” into voting against their political conscience and for Professor Mills. Knowing Professor Mills, I do not think he is happy that delegates were coerced physically or psychologically into casting their “secret” ballot in his favor. The complaints coming from Botchwey supporters in Asante and Eastern Regions serve as evidence that NDC still has not matured to accept the democratic process. In the end, it also demonstrates the failure of Dr. Obed Asamoah and Professor Botchwey to steer their party in a different direction.

The National Democratic Congress was born in illegitimacy as the child of the PNDC, the illegal regime that came out of the military coup that propelled Fl. Lieut. Jerry John Rawlings into the leadership of Ghana. The transformation of PNDC to NDC was crafted by the likes of Obed Asamoah who supplied intellectual and political backbone to the brash and naïve soldiers who claimed power accruing from the coup. Many well-educated and internationally savvy Ghanaians have become aligned with the NDC but it is difficult to see what positive influence they have brought to the democratic process in Ghana. In fact, one can argue that these NDC members of the “educated elite” have used the roguish image of the P-NDC to amass both political and financial wealth and in the process have lost their ability to act freely within their own party.

There is no question that the recent NDC congress has affirmed the control that Rawlings still exerts over the party. That Obed Asamoah and Kwesi Botchwey tried and failed to wrestle the party from the grip of Rawlings is also now an established fact. It is this observer’s conclusion that until a force of reason, moderation, and democracy emerges from within or outside the NDC to take over the running of the party, the NDC will continue to function as a party of illegitimate democratic legacy. Rawlings is credited in the press as the founder of the NDC. This is hard to believe. How does a soldier, a two-time coup-maker, and an avowed non-believer in multi-party democracy become the father of a political party? Rawlings has not demonstrated during his long rule of Ghana and since his party’s defeat that he either understands or appreciates the basis for democracy. Intimidation and bullying have characterized every speech and action the man has taken. His continued delivery of bombast in his speeches as a former President of the Republic only demonstrates his permanent lack of intellectual and political maturity.

What amazes and amuses most observers is the continued support of Rawlings by so many people in Ghana. The Ghanaian press seems to be totally enthralled by the man and gives every word he utters more publicity than it deserves. In fact, Rawlings and, unfortunately, many Ghanaians, believe that the rule of Ghana belongs to him and that it is out of his generosity that Ghanaians are enjoying some political freedom. Continually, he threatens to withdraw that “generosity” with his “boom” speeches. Why do Ghanaians tolerate the threats and political buffoonery of this man? Why do so many “good” people in the NDC allow this man to lead them? Are Ghanaians too cowardly to stand up to Rawlings? Are these NDC cronies too intimidated by Rawlings to speak and act freely? Or is it likely that they “owe” Rawlings for the wealth and living standards they are enjoying now?

I submit that most of the senior people in the NDC do not believe in Rawlings. I submit that most of them feel intimidated by the irascible Rawlings. I submit that most of the NDC leadership in the party and in parliament do not speak freely. I submit that the “good” people in NDC are hiding behind the bungling and intimidating image of Rawlings because he gave them “cover” while they used their positions (when in political power) to gain loans and other personal benefits. I submit that until people like Bagbin, Steve Obimpeh, Ohene Kena, Kwamina Ahwoi, Dr. Mary Grant, and finally Professor John Atta Mills stand up and speak freely about the NDC and its illegitimate claim to democratic principles, the party should and will remain a rogue party. Either these people leave the NDC and ally themselves with their true political heritage – leftist Nkrumahist – in the CPP or they remain under the tainted umbrella of a murderous and bullying “founder”.

Professor John Atta Mills now has to convince Ghanaians and the world that he won the support of his party in his own right and that he possesses the political and intellectual strength to step out from the shadow of the bully. His selection as the 2004 NDC presidential candidate may have benefited from the intimidation of Rawlings and his henchmen. There is no reason why he should live with that shame.