By James Harding Giahyue, with The DayLight
Liberia 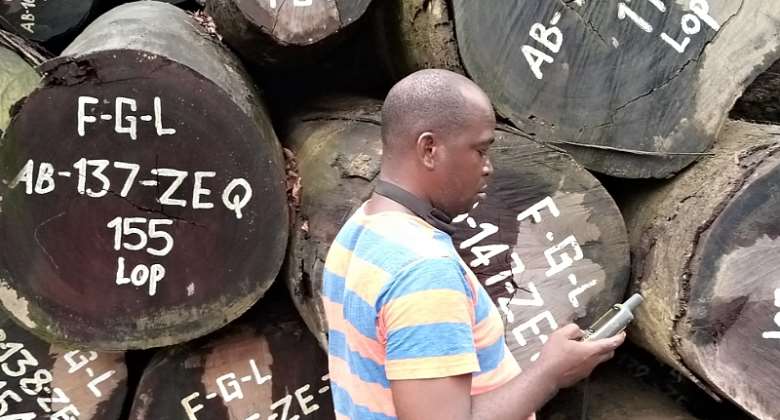 MONROVIA – Two companies harvested logs worth US$2.475 million outside of a concession area in Grand Bassa County, with the government of Liberia yet to take any action more than a year since it began an investigation into the violation, a new report by a group of civil society organizations (CSOs) has found.

It raised concern over the TSC-A2, which was issued in 2009 for three years but remains active nearly 10 years after its legal expiration date.

“This evidence represents a huge breach of the law, and points to a disturbing trend of irregularities and non-compliance with the forest laws of Liberia,” the report said. “The evidence points to a huge loss of revenue to the state and to communities. This must be remedied, and communities must receive the full benefits they have the right to.”

It was co-authored by the Sustainable Development Institute (SDI), the Independent Forest Monitors (IFM) and the National Union of Community Forest Development Committee (NUCFDC) in a consortium called the Independent Forest Monitoring Coordination Mechanism. Its work was funded by the European Union, the United Kingdom and the Ministry of Foreign Affairs of the Netherlands. A forestry regulation and Liberia’s Voluntary Partnership Agreement (VPA) mandate such civil society-led investigation.

Following a tipoff by Paris-based Société Française de Réalisation, d’Etudes et de Conseil (SOFRECO), the Ministry of Justice launched an inquest into the so-called road-alignment harvesting but has yet to release its findings. The auditor was hired in 2019 under Liberia’s VPA to prepare the country to issue Forest Law Enforcement, Governance and Trade (FLEGT) license to enable it to sell timbers on European markets. The report criticized the ministry for not releasing the report more than a year on.

“[We] note with dismay that the report of the official investigation has still not been published, almost one year later,” the report said. “It is critically important for Liberia, its people and its forests, that the rule of law is seen to be applied, and that citizens have the information they need to hold the government and each other to account.

“A lack of accountability for violating the laws is reinforcing impunity. Enforcement action must be taken, including prosecuting individuals or companies involved, and revoking all relevant permits,” it added.

The Ministry of Justice did not respond to The DayLight’s inquiry for comments on the matter. We contacted Minister Musa Dean through WhatsApp and text messages hours after the report was released by he did reply.

Liberia’s forestry reforms created community-centered laws and regulations against illegal logging. In 2011 it signed a VPA with the European Union to ensure logging is done legally and sustainably. But the last decade has seen the sector marred by irregularities, including the 2012 Private Use Permit Scandal, which rocked the war-ravaged nation. The report called on the government of Liberia to take action or see its gains continue to be reversed.

“The inability of the Forestry Development Authority (FDA) to enforce the laws contributes to irregularities with the sector,” the new CSO report said. “Reforms must be implemented, including public access to LiberTrace data.” LiberTrace is the software the legality verification department at the FDA uses to trace each log from forest to export. By law, the FDA should publish all permits, export data, and payments it receives periodically but it does not. The solitary publication of such a report on its website is its activities in February last year, which was only published in June earlier this year.

The FDA said it would respond to the report.

In July last year, a team of civil society actors went to Grand Bassa and discovered that logs tagged with FDA barcodes “TTC/RGI” and “FGL,” according to the report. The logs were found six kilometers away from their permit area, towards Compound #1. The team confirmed nearby log yards belonged to RGI and FGL. A number of stumps were found the same distance from the 5,000-hectare former concession area.

The boundary of TSC-A2 and evidence of logging outside of it. Photo credit: Independent Forest Monitoring Coordination Mechanism

Out of the 14,000 cubic meters of illegally felled logs, 9,000 cubic meters had been exported and recorded in the chain of custody, according to the French auditing firm’s tipoff letter—seen by The DayLight—which had accessed LiberTrace’s dataset. It said the remaining 5,000 cubic meters of logs “must remain ‘in stock.’” The new report valued the exported logs at US$2.475 million on the world market at the time.

The report called on the FDA to revoke the permit of TTC, owned by eight Liberians, including David Tarpeh, its majority (35 percent) shareholder. The company was the first to have its products into the FDA’s log-tracking system following the lifting of United Nations sanctions on Liberia’s timbers in 2006, the same year it was established. It has been associated with logging outside its concession before, and, the report added, it appeared to deliberately risk a fine for greater profit.

A 2009 United Nations Panel of Experts report found the company harvested timbers outside its concession area valued at least US$100,000 but was fined a meager US$2,000 or two percent of the value of the export. In 2018 the FDA fined RGI US$5,000 over logging outside the concession and later US$100,000 following pressure from the European Union.

“Given the value of the exported logs, the appropriate punitive measure that the FDA would have instituted should have been to confiscate the logs,” the report said. “The fines do not appear to have hindered the operations at all, evidenced by the companies’ continuing to extract logs in the area.”

It criticized the FDA for appearing to allow road-alignment logging. It involves companies cutting trees alongside pathways to improve road networks and into their concession areas. However, it has been abused for more than a decade. Last year, one company, African Trades and Entrepreneur Enterprise Incorporated, signed a bogus memorandum of understanding with another community in Grand Bassa to pave roads for locals in exchange for logs though it did not have a concession there.

The FDA had in 2016 promised to prepare a regulation for the controversial logging after the Sustainable Development Institute (SDI) established that logging had taken place outside of the Blouquia Community Forest in Grand Gedeh County. However, two years later, Volunteers for Sustainable Development in Africa (VOSIEDA) exposed similar irregularities outside the Numopoh Community Forest. The FDA has yet to deliver on its promise.

“The [National Forestry Reform Law of Liberia] makes this difficult as it is clear that all logging must take place under one of the existing permits,” the report said. “Laundering logs for ‘road widening’ and similar reasons is a widespread illegal practice in many countries.”

TSC A2 has been controversial in other ways. In 2019, the Environmental Protection Agency (EPA) halted logging operations within the concession due to a lack of an environmental permit. It was not clear whether RGI later obtained the permit. That same year, the Ministry of Justice placed a stay order on the concession after RGI, 100 percent Liberian-owned and FGL, owned by Liberian and American shareholders, wrangled over ownership of assets. RGI’s business registration shows that it is a mining company, not logging despite obtaining a prequalification certificate from the FDA. In fact, it ran three gold-prospecting licenses in Garwula District, Grand Cape Mount County in the very 2019, which have all expired.

TTC, RGI and FGL did not respond to queries before this story was published. We called the companies on several occasions but their numbers were off on each attempt. We visited their offices but found no one there.

This story was first published by The DayLight on Friday, November 5, 2021.

COVID-19: Our responsibility to one another is to get vaccin...
12 minutes ago

Bawku disturbance: Cooperate with government to ensure peace...
20 minutes ago