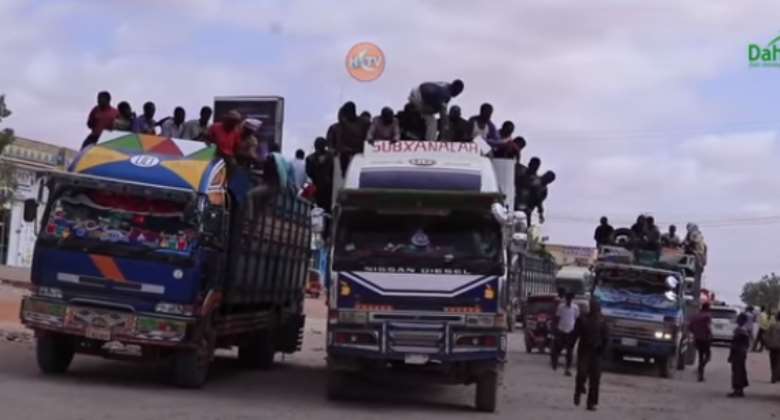 MOGADISHU, SOMALIA: The federal government of Somalia had vehemently and diametrically decried the Somaliland's involuntary repatriation operation and also aid agencies condemned Somaliland expulsion expulsion of Southerners and warned of looming dire humanitarian crisis. The caretaker prime minister of the federal government Mohamed Hussein Roble had deeply censured the arbitrary arrest and forced displacement of more than 2,000 of the most vulnerable and susceptible groups of the community including women,children and elders from Lasanod, of Sool region. We are also very concerned about the reports of additional forced displacement planned in the coming days.

Some of the forcibly evicted and displaced people are now languishing in the streets and living in state of limbo and others are now camping on the outskirts of Galkayo, Mudug region and Garowe in Nugaal region. Currently, they are in urgent need of protection and humanitarian assistance, thousands more are reportedly on the way.

The evicted people have said that they had lost everything including shelter, assets and livelihoods. Humanitarian partners in Galkayo and Garowe towns are coordinating a rapid Humanitarian assessment to establish the number of affected people, their immediate needs and in collaboration with local authorities and provide a temporary shelter.

Widely perceived and reliable reports indicate that the people being forcibly evicted and displaced from Lasanod have lived there for nearly two decades and these Southerners had integrated and assimilated the Northerners and performed multiple exogamies by marrying local women and that affinity became futile and counterproductive. The precarious plight has the potential to stoke tensions and dichotomize the co-existence and cohabitation of the society and exacerbate the vulnerability and volatility with profound humanitarian repercussions.

We urge the authorities to retract, revoke and abandon the untimely repatriation and act with restraints and explore and find a sustainable way forward which could respect the rights and the dignity of all affected people without further delay. The haphazard, random and arbitrary eviction has sparked criticism from the UN. Said the spokesman of local aid agencies.

Meanwhile, we can call on the international humanitarian actors to provide and expedite emergency assistance and to work with the local authorities and local relief agencies towards durable and sustainable solution or way out of this unfolding crisis. Siad the mayor of Garowe.

The self-proclaimed republic of Somaliland or self-declared independent state in the Northern Somalia; says the deported southern Somali citizens pose grave and potential threats and security risk. Somaliland a defacto state which had existed for the past three decades with its own institutions, but still remains unrecognized internationally, causing pervasive controversy and outcry on October 3 and 4, 2021 respectively for expelling hundreds of families believed to be security concerns and economic burden and they utterly intermingled the locals in Somaliland.

Somaliland public officials described the decision to deport Somali citizens as part of Somaliland's sovereign responsibilities. They clearly and unequivocally said it was motivated by issues pertaining to security, including appeals from local communities and authorities and that the details of the eviction and deportation was distorted and misinterpreted by Mogadishu to portray Somaliland as rogue and seclusive state officials in Hargeisa, its capital, said in a statement..

The prime minister of Somalia chose to convey unfounded and biased information and share baseless accusations on the issue of Somaliland's legal and necessary decision to expel and deport selected individuals, who had unlawfully settled in district of Lasanod, provincial capital of sool region and committed serious offences in Somaliland they said referring to the criticism by Somalia's PM Hussein Roble.

Somalia's minister of Justice Abdulkadir Mohamed Nour had rigorously criticized the deportation of people from the South-western region of Lasanod in Sool region by Somaliland authorities, minister also described it as unfortunate and disappointment that certain people were being targeted for their ethnicities or for doing business peacefully in the city. And some were evicted from their property and homes. I personally and frankly appeal the Somaliland administration's to refrain from such acts and do not reflect moral, traditional and Islamic values or Somali culture.

Information minister of the federal government Osman Dubbe also expressed deep concern and sadness over the deportation of Somali nationals in Lasanod and called on the people of Lasanod to preserve their Somali history and identity. On Saturday, Somaliland authorities repatriated 800 people including women and children from their homes in Lasanod to the Mudug region saying that Somalland authorities have violated cultural laws and traditions, said the minister.

Somalia's northern region of Somaliland had triggered widespread controversy by expelling people from the South, even though, Mogadishu considers it part of its territory. On Saturday morning, hundreds of people from Lasanod town arrived in Burtinle, Puntland. a Somali federal member state that borders Somaliland. They were reportedly identified as originating from Southern Somalia and were rounded up indiscriminately and taken to the stadium and authorized to board trucks.

On Sunday, The federal prime minister Mohamed Hussein Roble on a visit to Barawe the capital of South-west state, 200 Km South of Mogadishu, expressed displeasure and frustration at the news that hundreds of Somalis were expelled from Somaliland.

The expulsion which affected all sorts of people and all walks of life including women, children, the elderly and business people were executed immediately and without notice. Somaliland current authorities in Lasanod reportedly associated the people from Southern Somalia with increasing insecurity in the town and crime rate and assassinations had soared exponentially due to the Southerners.

PM Roble dismayed and emphasized such deportation is a tantamount to mistreatment of people in their own land. Expelling Somalis from a Somali territory is shameful, degrading, embarrassment, humiliating, disgust, ugly and dishonoring; he said. Authorizing people who have been peacefully trading to leave for simply originally coming from southern regions is unfortunate, crime against humanity and will be recorded by the history. Said prime minister.

Unprecedented expulsion and it's outcome of massive exodus and influx is a new phenomenon that undermines intra-Somali fraternity and commonly held customs. On Saturday Morning convoy of trucks were seen loaded with Southerners arrived in Burtinle, Puntland the evacuees and deportees were met by well-wishers and philanthropists, Good Samaritans and local authority who helped with accommodation, food and free medical services. Further reports indicate that trucks carrying deportees proceeded to Galkayo, the capital of Mudug region in Central Somalia, where they were welcomed by Semi-autonomous region of Puntland's officials.

Puntland's interior affairs minister Mohamed Abdirahman Daban'ad said they received so far 840 evacuees. " I urge all agencies and state bodies dealing with humanitarian matters and crisis to resettle these people expelled from Lasanod, Somaliland" Said minister Daban'ad. A mother of seven kids complained about gross maltreatment. Our houses were raided at dusk and we were taken to Abdi bile Abdi Stadium and coerced to board trucks we don't know their intended destinations, she told the media, lamenting that they were not given food and some families were missing their loved ones.

Over the past three months, officials in LASANOD have been shot and killed by unidentified assailants. The inability to identify, apprehend and prosecute the culprits or perpetrators behind the assassinations appears to have prompted this mass expulsion of Southerners.

Though, not recognized or accredited by any country Somaliland says it has been independent from rest of Somalia in 1991 when the tyrannical regime conducted massive aerial bombardments and razed to the ground the entire city of Hargeisa and inherited the town to be called Dresden city in which many people from North were exterminated. Following the collapse of the monocratic and military regime of the late General Mohamed Siad barre, who deposed the legitimate and democratically-elected president Abdirashid Ali Sharmarke by staging bloodless military coup de'tat.

Such kind of massive repatriation is unprecedented and presumed to incite tit-for-tat reprisal on the basis of clan ethnic lines which could far-reaching and cataclysmic ramifications.