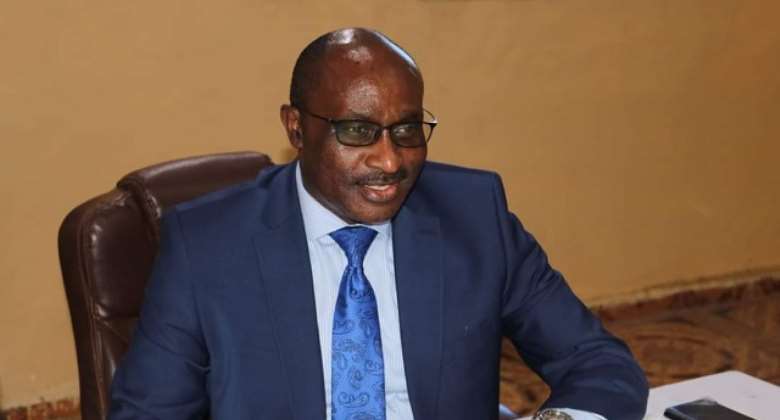 MOGADISHU, SOMALIA. the federal government of Somalia authorized an expulsion order to expel Amisom deputy, and declared him persona non grata. The federal government had accused Simon Mulango, a Ugandan citizen of engaging conniving, colluding and sabotaging aactivities that are contrary and incompatible with AU mission Mandate.

Mr Simon Mulango, Who is a Ugandan citizen was alleged of his engagement of activities that are incompatible with Amisom's mandate and Somalia's strategic security, a press statement issued from the Ministry of foreign affairs & international cooperation said that Somalia is ready to renew its cooperation with African Union AU on the preconditions of safeguarding the sovereignty and the national interest and avoiding all malpractices.

In a letter addressed to African Union dated on 4 November, 2021from Somalia's foreign ministry indicted Mulango of overstepping his tenure and mishandling and obstructing Somali security strategy. Saying he was no longer welcome in Somalia.

The foreign ministry does not clarify and elaborate further the nature of activities or the reasons behind the decision to expel Mulango, Somalia's foreign affairs ministry wrote to the Addis Ababa based AU commission, informing the secretariat of the continental bloc of its decision. He had seven days to leave Somalia it added without giving any further reasons for the decision.

In a subsequent Tweet, Somalia's foreign affairs minister Mohamed Abdirizak said the federal government would hold Amisom staffs accountable, especially those in leadership positions who are expected to avoid anything that could add fuel to the fire or exacerbate the simmering tension or could tarnish or taint their image, duties to the UN and African Union.

He added Somalia is eligible to expel and prosecute those who contravene Somalia's sovereignty specifically those at the leadership levels and those expected to be beyond reproach in their integrity as they discharge their duty under UN/AU mandate.

Mulango was appointed to the office on August 19, 2017 taking over from his predecessor Lydia Wanyotta Mutende, contract and term in office has ended at the time. He previously served as a director of East African stand by force in Nairobi and a member of Ugandan Parliament representing Bubulo East Constituency.

According to the African Union, Amisom forces first arrived in Somalia in March 2007 since then the Amisom military component has aided and collaborated Somali national security forces in flushing out the al-Qaeda affiliated armed group Alshebab from most of the major cities and towns of South and Central Somalia Alshebab had early controlled large swathe of territory in Somalia.

Expulsion authorization is nothing new to the ears of Somali citizens as well as global audiences and viewers because the current federal government of Somalia had taken similar measures if expulsion. It was late January in 2019 when Somali government has authorized the United nation's envoy to the country to leave or absquatulate, amid questions over the incarceration of the Alshebab extremists group's former deputy leader who had run for a regional presidency.

A foreign ministry statement accused Nicholas Haysom a south African citizen and prominent UN diplomatic overreach for violating or infringing the Horn of Africa Africa nation's sovereignty, declaring him " Persona non grata" he arrived as an envoy few months ago as soon as he was nominated.

Haysom had questioned the legal basis or legitimacy and validity used in the arrest of Mukhtar Robow, former Alshebab spokesman who defected from the group in 2017 and whether UN-funded regional police in the southwest state were involved.

Ethopian troops who are part of the African union force in Somalia and Somali police forces had jointly arrested Robow days before the regional election which Robow was the leading and outstanding candidate. Deadly and bloody protests were soon erupted in Southwest state to demand the immediate and unconditional release of Robow, but these violent protests were quelled and quashed by Ethopian and Somali forces by using excessive and disproportionate forces and sporadically firing live ammunitions to the protesters.

Several protesters or demonstrators were shot dead at the rallying point of the protest and others were sustained fatal and minor injuries and some of the fatal injuries were rushed to the hospital but later succumbed to their injuries.

Haysom's letter to Somali authorities questioned the legal framework and due process of Somalia's defection process and asked how Somali authorities were able to detain Robow indefinitely and beyond the normal 48 hours. The letter also questioned the murky circumstances around the civilian death and gruesome atrocities committed during the protests and urges that they be " Thoroughly, independently and promptly investigated "

Mukhtar Robow defected The Islamist group after he categorically opposed their ruthless ideology of killing and assassination. Robow was flown to Somalia's capital, Mogadishu, and has been held in incommunicado run by Somalia's intelligence agency.

UN deputy spokesperson Farhan Haq said the UN was monitoring the issue very closely and it is too early to take a decision and we are also looking the matter before determining what appropriate and logical steps to take.

Yesterday's decision to expel the African Union commission representative in Somalia, Simon Mulongo came as a surprise and many people had dumbfounded and flabbergasted and somehow mindblowing. But it testifies that the current Somali authorities is functioning and leading the country effectively and anyone who transcends the red line will bear the brunt or pay the price and will be dealt with harshly.

Somali people also welcomed and jubilated the heroic determination to expel Simon Mulongo and said Somali is no longer a toddler state and stood its own feet and is sovereign and independent state and any diplomats who attempt to foment schism or polarize the society or endeavor to meddle the domestic affairs will be taught a lesson that immortalized his or her memory.

Today's decision will act as a formidable deterrent to foreign spoilers deemed to subvert the state and those actively engaged the internal issues of the country.

It remains to be seen what the next step of AU mission will be in terms of the expulsion order from the federal government of Somalia......