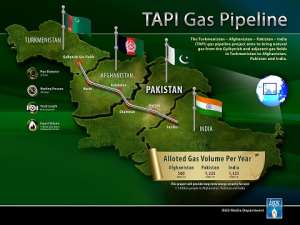 Turkmenistan-Afghanistan-Pakistan-India gas pipeline is a regional connectivity project for supplying gas to fulfill the public demand from Turkmenistan to India’s Fajilka (Punjab). It a great regional initiative proposed by ADB and taken by four regional countries. The TAPI gas pipeline seems to a bridge between South Asia and Central Asia. We know Central Asia is a huge source of Natural gas. But Pakistan and India are very needy regarding the gas demand. It aims to monetise Turkmenistan’s gas reserves and supply them to neighbouring countries to promote the use of natural gas and improve energy security.

The regional connectivity gas pipeline will supply natural gas from the Turkmenistan’s through Afghanistan into Pakistan and then to India . Construction on the project in Turkmenistan inaugurated to construct the gas pipeline on 13 December 2015, work on the Afghan section began in February 2018, and work on the Pakistani section was planned to commence in December 2018.

The TAPI pipeline project was launched in 2016. The TAPI pipeline is expected to carry 33 billion cubic meters of natural gas per year. The 1,814 -kilometer gas pipeline stretches from Galkinesh, the world's second-largest gas field, to the Indian city of Fazilka, near the Pakistan border.

Work on the TAPI project in Afghanistan began in February 2016. The 617 km pipeline of the gas pipeline was planned to pass through Afghanistan. But due to internal situation, security in Afghanistan and India-Pakistan tensions, regional issues the connectivity project wasn’t implemented.

The countries in the region should play a sincere role in cooperation in trade, economic cooperation, energy, counter-terrorism, disaster management, infrastructure and education for multilateral benefit. The Turkmenistan-Afghanistan-Pakistan-India (TAPI) gas pipeline and the CASA-1000 power transmission project would increase the cooperation amongst the regional countries.

The Afghan blockade of the ambitious and multimillion-dollar gas pipeline between Turkmenistan, Afghanistan, Pakistan and India (TAPI) has been removed. The pipeline is expected to reduce South Asia's energy shortages.

The President of Turkmenistan said that this gas pipeline is important politics for the Central Asian countries. The pipeline was in question because of India's relationship with Pakistan. But the Indian foreign secretary described the pipeline as a new chapter in cooperation between the four countries.

Pakistan is very interested to complete the project. Afghanistan, Pakistan including India would benefit from the gas pipeline connectivity project. Afghanistan’s interim government has given already the green signal to complete the projects. Basically, this gas projects would fulfill the demand of energy, electricity and gas in Afghanistan, Pakistan including India. the project was expected to create 2,000 new employment opportunities. implementation of the TAPI gas pipeline project was beneficial for the entire region, with Afghanistan alone to get $1 billion as transit fee and royalty.

Pakistan will be the main customer of Turkmen gas. Pakistan has long suffered from energy shortages that affect families and businesses alike. Load shedding is a very common term in Pakistan now. That is why the supply of gas and electricity has become an integral part of the election manifestos of political parties.

The project will bring clean fuel to the growing economies of India It will provide energy-hungry India gas to run its power plants. TAPI's uninterrupted gas flow will be extremely important for India's energy sector.

Although Taliban’s the Kabul takeover on August 15, 2021 has changed the geo-politics in the region, there are some issues where all regional countries can work together for ensuring the mutual interest in the region. Although India was an active stakeholder in this project, now India’s position in this regard is not clear. But India should remain in this project for its own interest. There might have some bilateral problems in India-Pakistan, but that is not issue. All regional states including India and Pakistan can work closely in the sector of trade and connectivity for ensuring the common greater interest. If this gas project can be extended to Bangladesh, Nepal, Bhutan in the near future, all regional actors would benefit from the connectivity project. It is true that Resumption of TAPI pipeline project in Afghanistan brings a new hope for the region.