Funerals: The new business in Kumasi 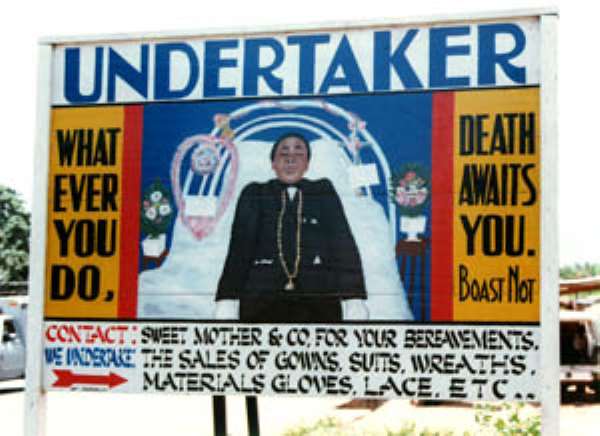 One business that is gradually becoming very lucrative and is offering business tycoons a lot of prospects in the Kumasi metropolis is the provision of facilities for funerals.

The funeral industry, as it is often referred to, is not only offering employment opportunities to the youth but has also become an avenue to get very quick money, especially during weekends when funerals are organised in grand style.

For the youth, especially those attached to many "funeral services" that provide facilities for funerals, it is those occasions that offer them the opportunity to accompany the various cargo cars to funeral grounds to arrange the canopies, plastic chairs and musical instruments that make the funerals more of festive occasions than places of mourning.

That unique service to the bereaved families, however, does not go without a tip to swell the pockets of the youth.On the average, over 50 funerals are held in the Kumasi Metropolis weekly, and these really bring a lot of pressure on the service providers.

Normally, it is the affluent who go in for the most modern facilities and who also hire the funeral vans, video operators and traditional funeral contractors to give their funerals that extra touch so as to receive compliments from mourners, most of whom only come there to observe, so as to make the necessary comments and comparisons afterwards and see how they can organise a more befitting funeral than what they witnessed.

To the observers, their main concern is how to outdo the immediate past funeral, so as to be acclaimed the best in the enterprise.When it comes to their turn, therefore, they spend much more money to organise the funeral, regardless of the plight of the youth in their families crying for only a few cedis to pay their school fees or get a little capital to set up their own business ventures to start life.

Gone are the days when funerals were occasions where only drinks and water were served to sympathizers who also showed their sympathy by offering a few cedis as their contribution to offset the cost involved in organising the funeral.Today, especially in the Kumasi Metropolis, funerals have become a competition for some people and this has given the opportunity for others to cash in.

In old suburbs such as Asafo, Amakom, Ashanti New Town and the famous Bantama, most of the major and branch roads are blocked for funerals, especially when a very prominent citizen of the metropolis passes away.When that happens, the already chaotic traffic situation that is gradually giving residents much irritation is compounded, making both motorists and passengers more frustrated than ever.

Since this practice of rampant road closure, happily endorsed by the Kumasi Metropolitan Assembly (KMA), has almost become a norm in the Kumasi Metropolis, nobody dares to whimper, for any kind of complaint is likely to fall on deaf ears and could get one into serious trouble if he/she pursues the case further. Even though bereaved families supposedly acquire permits to block the roads to be able to organise a befitting funerals for their loved ones, what is not very clear is whether the KMA also grants them the permit to make extra noise and disturb the entire community.

On such occasions, the hired hearse is likely to arrogate to itself the responsibility of blowing its siren at such a pitch that everyone is forced to give it attention. The situation is worse when a taxi or trotro driver dies. It is on such occasions that some of the taxi and trotro drivers in Kumasi, most of whom obtained their driving licences long before they learnt the rudiments of driving, prove beyond every reasonable doubt that, when it comes to careless driving, they have no peers in any part of the country.

In the course of exhibiting their brand of driving during the funeral of the departed colleague, a lot of accidents occur, leaving in its trail a lot of fatalities, while others are maimed for life.The organisation of funerals for the affluent also goes with the adoption of different mourning cloths for the burial, final funeral rites and the thanksgiving service.

Aside of these, souvenirs, such as handkerchiefs and key holders, among others are produced and offered to sympathizers who dole out very handsome donations. It has also become fashionable to serve all kinds of food at the funeral grounds, making it more of a merry-making event than a period when bereaved are supposed to mourn the departed and use the occasion to reflect on who to follow next. Some affluent families even hold funeral dinners for the high up in society. What is not very clear is whether this generation is gradually merging festive occasions such as outdooring, birthday and marriage ceremonies, among others, where the living have cause to enjoy, with the celebration of funerals, where there is the need to deeply ponder on where the departed soul is heading and how the living would cope with life without the departed one.

It seems the present generation is slowly but surely adulterating the customs, culture and traditions bequeathed to us by our forefathers by turning funerals into festive occasions.

However, no matter the outcome of this debate, the cost of funerals in the 21st century is assuming alarming dimensions, and the earlier we cut down the cost and use the resources to assist in the socio- economic development of the nation, the better it will be for all.