South Africa turns on ANC, leaves president in a bind 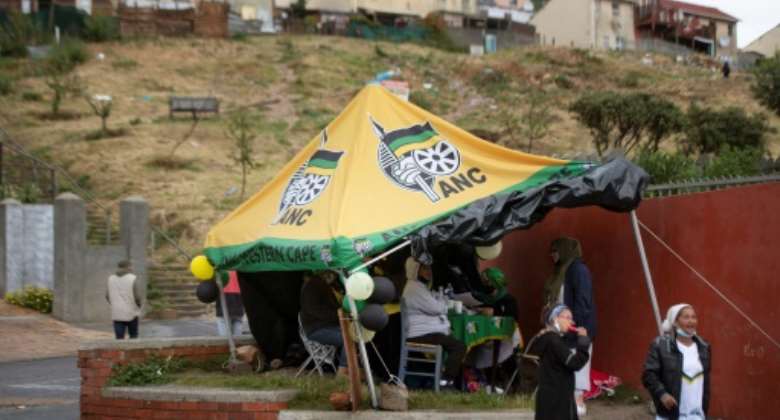 A day to forget: ANC supporters man a party stand outside a polling station in Hangberg near Cape Town. By RODGER BOSCH (AFP)

President Cyril Ramaphosa is now in a deep bind after the ANC won only 46 percent of the ballots cast nationally -- by far its worst showing since the end of white-minority rule in 1994.

It lost six of the eight main cities, and suffered major declines in others.

Voters in townships largely stayed home, with turnout as low as 22 percent in some areas.

But the leading opposition parties didn't benefit. Their performance was on par or worse than the last local polls five years ago.

Instead, voters rewarded small parties and independents, in a stunning rebuke of traditional politics.

"Measured against its own record, the ANC has done really badly," said author and analyst Sisonke Msimang.

"What the message is, certainly from voters in the big cities, is voters are fed up with the status quo."

The ANC's leadership immediately called a meeting Friday to discuss the dismal showing, with Ramaphosa's allies warning the party would have done even worse without him.

"We had the biggest arsenal in this campaign, Cyril Ramaphosa, the president of the ANC. If we did not have that, things could have been worse," the party's elections chief Fikile Mbalula told reporters.

Known as a soft-spoken leader who patiently builds consensus, Ramaphosa took office in 2018 vowing to weed out the corruption that had consumed the party.

Ramaphosa worked hard in the ANC's grassroots campaign but failed to whip up traditionally loyal followers. By Phill Magakoe (AFP)

His predecessor Jacob Zuma is on trial for corruption, while a separate investigation has already taken three years to unpack Zuma's scandals.

But an Afrobarometer survey found nearly two-thirds of South Africans believe corruption worsened over the last year under Ramaphosa.

His health minister was forced to step down this year, over claims of self-dealing in coronavirus contracts.

Ramaphosa then thanked him, saying the minister had "served the nation well."

"There's so much corruption," said Ivan Govender, 56, a restaurant owner in Johannesburg.

"Twenty-seven years down the line, they're still using apartheid as an excuse. It's not on! Hopefully this is a total wakeup call to get their house in order."

The question for the ANC is, can anyone other than Ramaphosa turn things around?

His liberation credentials are impeccable. He grew up in Soweto, and converses in all of the country's 11 languages.

As a leading figure in the mine unions, he helped negotiate the transition to democracy.

Then he left for the business world and amassed a fortune reportedly worth 550 million dollars.

But the quiet patience that forms his strength can also work against him.

When riots erupted in July, leaving more than 350 dead, he was slow to deploy security forces -- fearing scenes that would recall apartheid-era crackdowns.

And Zuma's supporters resent the corruption crackdown, which they feel has singled out the former president.

South Africa's president is chosen by parliament, rather than by direct election.

With an easy majority of lawmakers, the ANC could fire Ramaphosa if the party disapproves of his performance. They've already sent two of his predecessors packing mid-term.

Two pre-election polls indicated that Ramaphosa is significantly more popular than his party.

But that may not count for much when the ANC's national conference meets to choose its leadership next year, warned William Gumede, head of the Democracy Works Foundation.

"His popularity among the population of the country will count for nothing when he arrives at the ANC conference," he said.

"Although he fought corruption, many South Africans think he hasn't done enough. But his party thinks he has done too much. So that is his dilemma."

One confirmed dead in youth, Police clash at Kotobabi Market
6 minutes ago