From Kenya to COP26, the teen battling 'global disaster' 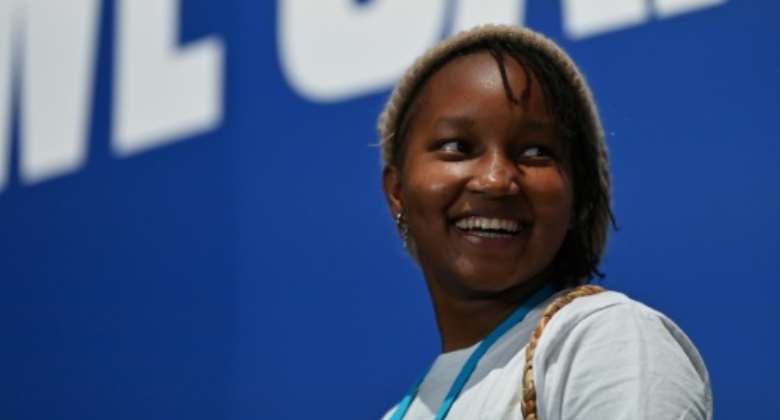 Rahmina Paulette says she feels that her voice 'is starting to be heard by many people'. By Paul ELLIS (AFP)

For teenage climate campaigner Rahmina Paulette, the journey to becoming an environmental activist began with a cancelled boat ride.

The young Kenyan was then around 11 years old and had been looking forward to the trip on Lake Victoria with her mother, but found the way blocked by a vast green carpet of invasive water hyacinth choking the bay near her native Kisumu.

"I went back home so sad" Rahmina told AFP at the COP26 conference in Glasgow.

She started researching the invasive weed.

Her first step was to set up a business selling water hyacinth furniture, table coasters and bags.

But Rahmina, who is now 15, did not stop there.

She launched a campaign called Let Lake Victoria Breathe Again, working for the restoration of the lake's ecosystems, with online petitions and offline marches.

"I personally am being affected by climate change," she said.

"I know what people are facing, especially the people from the most affected places."

Intense rains last year swelled many of Kenya's biggest lakes to levels not seen in at least half a century, some by several metres or more this year alone, following months of extreme rainfall scientists have linked to a changing climate.

The phenomenon is causing immense flooding, driving thousands from their homes.

In lake-side Kisumu, where Rahmina grew up, people have seen dramatic changes in the environment.

Her grandmother recalled a vast expanse of clear blue.

"You could even see the fish," said Rahmina.

Now the murky water is frequently blanketed with the water hyacinth infestation and suffers from pollution and harmful algae blooms that can be toxic to fish.

"Right now, if you can go back to Lake Victoria, you'll see many plastics, many waste and you'll see dead fish," she said.

"If we don't act, the future generation won't be able to enjoy what you are enjoying right now, or even what our ancestors used to enjoy, it will become a global disaster," she said.

Rahmina said she feels that her voice "is starting to be heard by many people", helped by the online platform she has as a model, after she won an Africa beauty pageant.

She plans to study climate policy and international relations.

Rahmina, who will be out protesting on Friday, said she has come to Glasgow to persuade world leaders to work with young climate activists.

"We will either work with them, or uproot the system," she said.