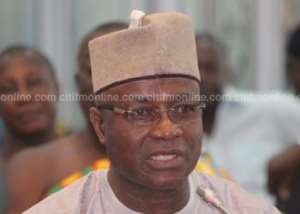 The Majority Caucus in Parliament says the Speaker of Parliament, Alban Bagbin, appears to be instituting new rules that seem to undermine the rule of law.

Police have tried without success on two occasions to arrest the Member of Parliament for the Madina constituency, Francis-Xavier Sosu, and have gone ahead to secure criminal summons against him in court, while Parliament has sent out strong signals that it will not countenance any threat from the police.

A statement released by the Majority caucus on the development said the refusal of the Speaker to release the legislator to assist with investigations into alleged offenses is of extreme concern.

“The Majority Leadership views the foregoing response by Speaker Bagbin as a troubling departure from how his predecessors handled such requests.”

To further back its assertion, the caucus referred to moves made by previous Speakers who found themselves in similar situations.

“To avoid doubt, when both Rt. Honourable Joyce Bamford Addo and Edward Doe Adjaho received those requests during their days in office, they responded by inviting the relevant MPs, held discussions with them, and then asked them to report to the requesting Police or investigative authorities. Again, during his tenure as Speaker, Rt Hon Professor Mike Oquaye modified the arrangement, including making the Speaker’s conference room available to the Police to meet with MPs they were interested in and to conduct initial investigations. He did this to protect the dignity of MPs, while at the same time ensuring that MPs are not put above the law. At all these times, Hon. Bagbin, as he then was, had been part of the leadership of the House.”

“The Majority leader of Parliament said the 8th Speaker of Parliament appears to be instituting new rules that seem to undermine the Rule of Law without any prior discussions with the Leadership of the House. We ask what exactly has changed?”

It clarified that the Majority believes in constitutionally guaranteed immunity for MPs.

“However, never should we, as a Parliament, make the mistake of allowing immunity to be construed to mean impunity. We take a firm view that in the particular case under reference, Parliament, as the law-making arm of our democracy, has a constitutional, legal and moral duty to cooperate and collaborate with the Police to ensure that the Rule of Law prevails. Further, Parliament must not be seen to be creating a false regime of two separate laws in Ghana – one for MPs and another for non- MPs. Instead, Parliament must ensure the equality of all citizens, including MPs, before the law,” the statement added.

The Ghana Police Service has secured a criminal summons for the Member of Parliament for Madina, Francis-Xavier Sosu, to appear in court on November 8, 2021.

This follows the several failed attempts by the police to arrest the legislator alleged to have breached the law during a recent demonstration by residents of Oyarifa and its environs.

But Francis-Xavier after failing to honour police summons accused the security agency of being disingenuous with their account of events.

Meanwhile, the Parliamentary Service says it takes strong exceptions to the manner the Ghana Police Service is seeking to apprehend the legislator over alleged wrongdoing.

In a response to the police, the parliamentary service intimated that, although the immunity of MPs is not absolute, the legislator cannot be hounded in a way that is unconstitutional and threatens the country's democracy.

It also finds it incomprehensible why the police administration has failed to secure a certificate from the Speaker of the House before going ahead to effect the arrest of the MP.

Akufo-Addo angry, dissatisfied over slow pace of work on Bol...
41 minutes ago