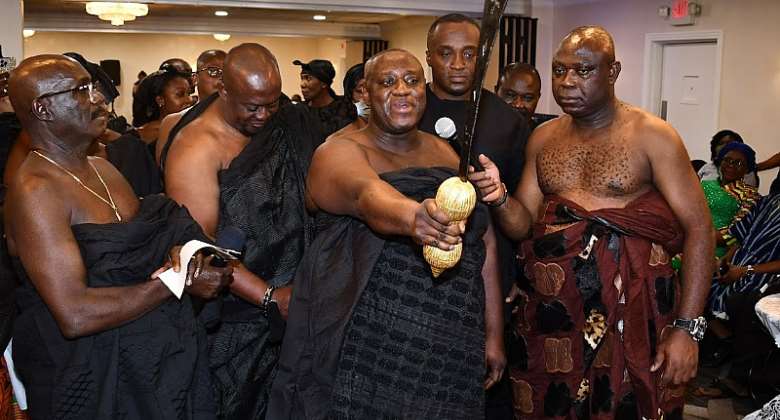 On Saturday, October 30, 2021, Mr. Frank Acheampong, a Washington DC-based business magnate was enstooled as the Asantefuohene of Washington, DC Metro Area under the stool name Barima Owoahene Owusu Acheampong. There was a colorful display of Asante Culture with Asante Chiefs from various parts of the United States in attendance. Barima Owusu Acheampong takes over from Nana Nyarko Ampem Darko who completed his term as the Asantefuohene of Washington DC Metro Area. The new chief and his team of traditional leaders swore the oath of allegiance before the Council of Elders of the Asanteman Association of Washington Metro Area.

Clad in traditional black cloth (kuntunkuni), as per Asante tradition, all the new traditional leaders were introduced to the Council of Elders and the other traditional leaders in the community including Nana Obuor Gyau (Adumhene of Bechem Traditional Area) and Nana Tentia Kwaasi (Kokofu Nkagyaamuhene). Nana Adusi Pokuaa the Asantefuohemaa (Queen-mother) of the Washington DC Metro Area Selected Nana Owusu Acheampong as the successor to Nana Nyarko Ampem Darko before he was introduced to the leaders of Asanteman Association of Washington DC Metro Area and accepted to lead the Association as Asantefuohene.

The Ghana Ambassador to the United States, H.E. Alima Mahama (Hajia) graced the occasion with some staff of the Embassy of Ghana in the persons of Ninette Danquah Ivo, Cynthia Djokoto, Janet Maku Koranteng, and Karim Kudayah. Also with the entourage was Mr. Mohammed Idris, a respected community leader in the Washington, DC Metro Area.

In his welcome address, Mr. Golash Opoku-Akyeampong Adadey, the President of Asanteman Association for the past seven years, expressed his appreciation to Otumfuo Osei-Tutu, the Asantehene, for giving them the privilege and opportunity to exercise the first step process to project the traditions and culture of Asanteman in the diaspora. He also appreciated the members of the Asanteman Association for standing with him through his tenure and supporting many health and education initiatives and development projects in Asanteman. President Golash Adadey also mentioned that the Association has resolved to honor Her Excellency Alima Mahama (Hajia) as a life Patron of the Asanteman Association of Washington DC Metro Area for her untiring efforts in reaching out to Ghanaians since she assumed office.

Ambassador Hajia Alima Mahama in her speech admonished the Ghanaian Community to unite to make a meaningful impact in their various communities. She urged them to take advantage of investment opportunities in Ghana. Furthermore, she also advised Ghanaians in the diaspora to support the building of the National Cathedral in Ghana for Ghana to have a befitting monument where national events can be held rather than the forecourt of the State house or Independence Square. Ambassador Alima also asked Ghanaians in the United States to register with the embassy in Washington DC to enable them to be recognized and get the needed support when the need arises.

After the traditional swearing-in ceremony, the newly enstooled traditional leaders changed their clothing from Black “kuntukuni” to black and white to signify celebration and the dawn of a new era.

Ambassador Alima presented $500 and assorted drinks as a token to the Asanteman Association. The presentation was made on her behalf by George Kwasi Bright.

At a later date, Asanteman Association will seek the blessing and permission of Otumfuo, the Asante King for Nana Owusu Acheampong to swear the final oath of allegiance to one of Otumfuo’s paramount chiefs at a high-level traditional ceremony.

The New Leaders After Swearing In

No one is above the law except the President - Oliver Barker...
37 minutes ago