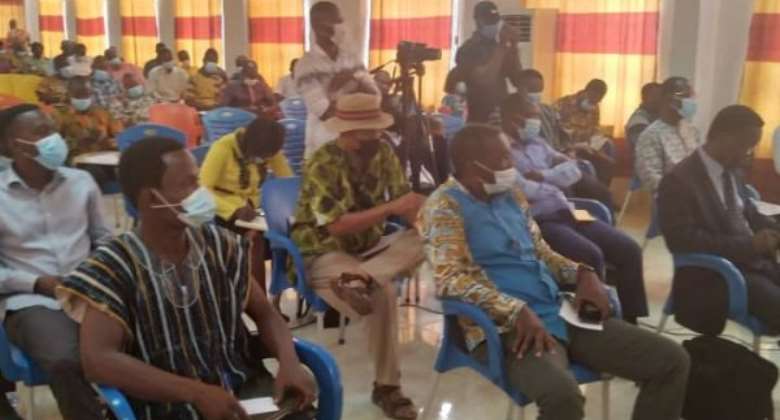 A regional fundraising campaign to mobilise funds to support the construction of the National Cathedral (NC) will be launched in Ho, in the Volta region on November 24, this year.

Reverend Seth Mawutor, Chairman, the Regional Planning Committee of the National Cathedral, who disclosed this at a media briefing in Ho, said the project was not partisan, hence should be supported by all to the glory of God.

He said the edifice would be a unifying monument of shared conversations on faith and national transformation and to religious liberty and urged the media to help send the message to the public to encourage them to donate towards the project.

Reverend Mawutor who is also the Chairman for the Christian Council of Churches in the Volta region, said as a nation and Christians, the NC provided a historic opportunity to put God at the centre of the affairs of the nation and as a symbol of eternal and continuing gratitude to God for his favours.

He said the NC represented a vision of a society which depended on God, the aspirations of which had been captured by the opening words of the National Anthem; 'God Bless our Homeland Ghana. And make our Nation great and strong!'

The NC with the Bible Museum and Biblical Garden, he said, would offer blessing to the Church and the nation as it would serve as national interdenominational facility for prayer and worship, a centre of learning, and a national point of convergence.

Dr Archibald Yao Letsa, Volta Regional Minister said the edifice when completed would be a glory to the name of the Lord, and called on all to come support the project.

He disclosed that he together with his wife would be donating an amount of GH¢ 20,000.00 towards the project during the launching.

Answering one of the strategies developed by the National Secretariat and Board of Trustees for the NC to raise funds, which aimed at getting 1 million Christians to contribute GH¢ 100.00 monthly for three years towards the project, Dr Letsa said it was not compulsory but just an appeal.

The edifice has a sitting capacity of 5,000 and could be expanded for other national activities and is expected to be completed before March, 2024.

It is estimated to cost 250 Million US Dollars, out of which the government provides 10 per cent as seed money and provision of land, while the rest to be provided by the Church and Ghanaians.

The facility is designed to include; among other things; Bible Museum, Chapels, Baptistery, National crypt where key leaders of the country are buried, a specialised library on African Christianity, conference centres, Board rooms, Banquet Halls, Prayer Rooms.

It will offer opportunity to African historians and interpreters of Christianity in non-Western contexts to retell and symbolise the Christian faith in ways that will feature the African contribution to the history of Christianity in Africa.

It will also feature African Diaspora contributions and a hall of fame to be set up that will have statues of key contributors to Christianity including missionaries, Bible translators, pastors, evangelists, theologians, musicians and divine healers.

Their stories will be featured in both audio and video forms and the sermons of contemporary Ghanaian Christian leaders will be played in the cathedral.

It will serve as a tourist attraction centre to Ghana and provide space for churches to organize and host big conferences, public lectures, symposia, workshops, seminars and Gospel concerts.

Akufo-Addo angry, dissatisfied over slow pace of work on Bol...
50 minutes ago