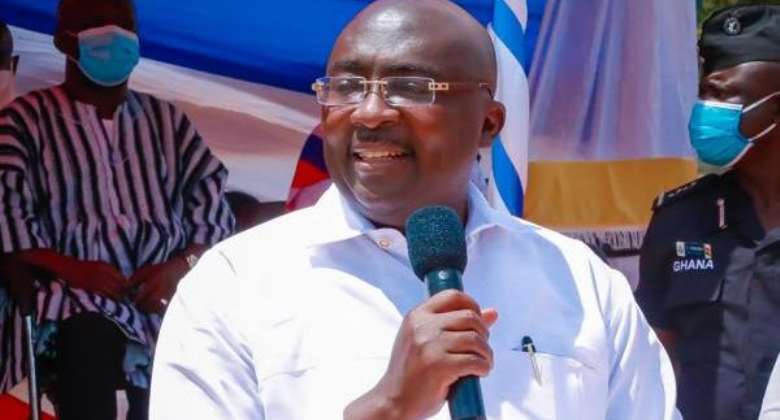 Those who saw him yesterday (2nd November, 2021) delivering one of his many lectures on the economy, this time "Digital Economy," at the serene grounds of Ashesi University will need no words purposely coined to describe the academic prowess of the Veep of Ghana, Dr. Mahammud Bawumia, vis-a-vis his capabilities as a Chief Executive Officer (CEO) of the republic in the near future.

As the race for flagbearership slot heats up in the New Patriotic Party (NPP), there's been a kind of conspiracy theories from all corners directed at Vice President Dr. Mahammud Bawumia's candidacy.

From pollsters, academics, clerics, bootleggers, rivals, haters, opponents, sycophants, and the new phenomenon, "prophets, seeing the next anointed leader of Ghana through the crystal ball".

Inasmuch as some of such predictions are of scientific basis and the many on sensationalism playing on ethnic and religious divisive sensitivities, little or not much is shed on the strengths the frontrunners bring to the table that is capable of solving our myriad problems as a secular republic and continue the beautiful footing of the ruling government.

One of such divisive "pollsterism" came from not less an individual than a big wig in the New Patriotic Party (NPP), the Member of Parliament for Assin North, Hon. Kennedy "Akomprɛko" Agyapong.

The firebrand politician and a business guru in one of his many interviews granted the media as reported by ghanaweb.com had postulated that: though the Vice President may win the flagbearership race in the NPP, but his religious leaning, coming from the Muslim minority side, will deny him the majority Christian votes hence losing in the end at the 2024 presidential polls" (sic).

This statement attributed to a politician in a democratic era such as ours though risible as it sounds needs to be rebutted with the urgency it demands to save the future of our fledgling democracy which is the envy of our neighbours and across many seas.

It's a statement when left to gain grounds in the hearing of the youth will be tempted to see investing in religious radical fanaticism than the holy books of global international polity ideals.

Picked from the corridors of the banking sector, an economist par excellence, nicknamed a wizkid, the Adam Smith who fathers modern economy Ghana dreamt for, an eloquent debater on the campaign platforms and before the seat of judgement; Alhaji Dr. Mahammud Bawumia is the academic the ancients called a "Messiah who'll assuage us our many toils."

And indeed, when given the mandate, serving as the second fiddle to the number one gentleman of the land, His Excellency President Akuffo Addo, the vice president has proved without doubt his worth, and the justification of his academic rankings.

With his digitisation drive, putting the economy on one global platform in time to meet the revolutionary trend of e-commerce, preparing a place for the Metaverse virtual world created by Facebook's (Meta) Mark Zuckerburg, it should rather not take a magic spell, or the clairvoyance of a rocket scientist to convince any a student of Ghana politics that Dr. Bawumia merits the political high office not because of any religious affiliation whatsoever.

Mourning with him on the sudden demise of his mother, a youthful member of the ruling party joined a group of NPP Die Hard Supporters who have taken it upon themselves to groom young business people in the party as in line with the vice president's ideologies, to pay homage to 'Maame'. And indeed, in the words of their Bono regional chairman, and the secretary to all the regional chairs, Mr. Isaac Kofi Ankamah, "I met face to face with the man Dr. Bawumia, stretching an elbow bumps to us respecting the Covid-19 protocols at the funeral. Around him, I saw no one a religious colour, or a political colour, or an academic elitism; but an amalgam of all walks of people who for simple love of the Vice President showed up in his unhappy moments."

Emphasising that the NPP Die Hard Supporters group who educate the youth on healthy politics, though they'll throw their weight behind any leader the party elects as the standard-bearer, but if he (Mr. Ankamah) was to have his way, Dr. Bawumia "should be the number one choice of the delegates at the electoral college".

The youthful chairman who hails from Goka in the Jaman North District and the CEO of the KOFANKI Investments, employing the teeming youth at his base in the regional capital Sunyani, added about the Veep that: "such is a gentleman, a mark of a unifier who rides not on one ideology to unduly be handed a crown on a silver platter."

"Dr. Mahamud Bawumia should not be rooted for to break the eight year terminal jinx just because he is a Muslim or not."

"But as shown again and again, if we're to understand what democracy is and should be nurtured for the longer foreseeable future, our analysis should be democratically minded than playing to any fundamentalist idealism."

"And if continuously we fail to see the good in others because we don't pray as they do, then as a Christian, I'll be the first to cause the sin of anathema and neglect my Christian brethren, and thumbprint for Dr. Bawumia's presidency because he's a Muslim. For I and my group of Die Hard Supporters Union happen to see the many good sides of the all round man of the moment, the vice president of Ghana, with the magic key that'll open the locked doors to the rooms of economic freedom we deserve as a republic." Mr. Isaac Kofi Ankamah concluded that: "Let's break the eight (#Let'sBreak8) so we can stay put with the digital economy, or without it, there will no economy for Ghana."

For an interview on this story, call the Chairman Mr. Isaac Ankamah on:

More Article
ModernGhana Links
Kenya Airways is in financial trouble (again). Why national carriers have a hard time
A decade later, no end in sight for Libya’s political transition
Burkina Faso coup: latest sign of a rise in the ballot box being traded for bullets
Oppong Nkrumah writes: We have a responsibility to be civil
GIJ’s Nana Osei Agyekum faces vote of no confidence as Graduate Students revolt against him
The rise of continents football “Underdogs” at AFCON 2021
The jihadists of the Sahel do not govern in the same way: the context is decisive
US trade pact suspensions: what it means for Ethiopia, Mali and Guinea
Afcon group stage: a stride forward for the African game despite low scoring
TOP STORIES