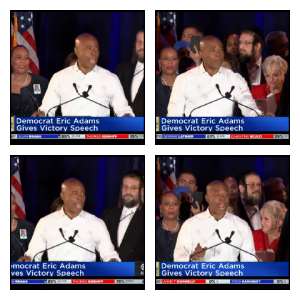 With an infectious broad smile, flanked by a mixed - race Democratic voters, Eric Adams started his victory speech by acknowledging the very important people who have helped him so far to this hard fought feat - a mayor of New York.

The inordinate palpable racial divide in the United States of America symbolised by the horrific strangling to death of the Blackman George Floyed by a police officer not long ago leaves little to say what hurdles people of colour have to scale before reaching such political heights.

Eric Adams' campaign team consisted of mainly whites, at least those he called to the dais and congratulated with a warm embrace, safe his blood sister whose role in his electoral victory he described as beyond description.

Seeing it firsthand as a former police officer the injustices the Black Americans go through in the country their forefathers laid their precious blood for, the new New York mayor indeed have ounces of reasons to smile so broadly.

As a child growing in the streets of New York, consistently coming face to face with radical white supremacists, those who for the only trivial fact that their skin pigmentation is different and thus must subjugate those who wears another complexion, Eric Adams see it a miracle fulfilled this day (2nd November, 2021).

The machinery that threatened his childhood has now been handed to his care.

The Bono people of Ghana say: _"he who cuts people's throats fears to lay supine."_

Eric Adams in his appearance never indicated going down the counterproductive path of nemesis induced witch-hunting and retribution.

That's not having any place in today's progressive chapters of the newly found world's democratic religious books of one people in a regime under heaven's sun with a commonwealth.

And indeed it was at play on the screens for all to see.

Midway through his victory speech, as captured by the CBSN news, an old white woman probably in her seventies or above it fought her way through the security human-shield that surrounded the new mayor. She brought out her mobile phone, beaming with smiles, and took many selfies with the Blackman mayor. She want to be part of history.

She want to be written about by posterity that she was there, and in support when America realised the prophetic words of Dr. Martin Luther King Junior in the streets of the Apple City.

The old woman has seen it all. She has seen what segregation hanged on the fragile strings of racism claws back human progress. And if this day of a watershed moment, writing another beautiful chapter of America's political history book, she must be part of the dream, where, _"the sons and daughters of America's four children will be judged by the content of their character, not by the colour of their skin, and share a table of brotherhood with all Children of God."_

Eric Adams, you've made history. Your ancestors are with you. Your brothers and sisters in Africa and world over are solidly behind you.

Thrust to this position, live the sagely words of Dr. Kwame Nkrumah that, _"when given the chance, the Blackman will show to the world that he's capable of managing his own affairs."_

In all vicissitudes of power, let love reign, as broadly as the infectious smile of Eric Adams.