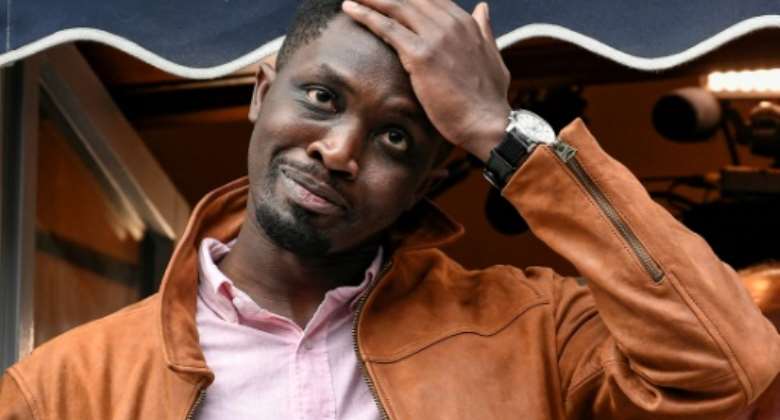 Mohamed Mbougar Sarr said 'I feel so much joy' after winning the Prix Goncourt. By Bertrand GUAY (AFP)

A young Senegalese writer unknown to the general public was on Wednesday awarded the Prix Goncourt, France's leading literature prize, for a novel exploring the destiny of a cursed African author.

Mohamed Mbougar Sarr, 31, is the first sub-Saharan African to win the literary award.

"I feel so much joy," he said at the upscale Parisian restaurant where the prizes are traditionally announced.

"I haven't yet found the words to say," he added.

The winning novel, "La plus secrete memoire des hommes" (The most secret memory of men), is his fifth, lauded for its mysterious characters, quality of style and writing.

"With this young author, we have returned to the fundamentals of the Goncourt will," Goncourt secretary Philippe Claudel said, noting that at 31, more works could be expected from Mbougar Sarr.

"I am proud of this magnificent accolade which illustrates the tradition of excellence of Senegalese men and women of letters," he added.

Former Senegalese prime minister Abdoul Mbaye tweeted that "this event will mark the history of our country... what pride it brings to our people".

"So pleasing and so beatiful to see someone who excels in his domain," he wrote. "Bravo Mbougar Sarr and thank you for having flown the flag so high."

'A hymn to literature'

Unassuming and softspoken, Mbougar Sarr is the son of a Senegalese doctor and was an avid reader and excellent student growing up.

Goncourt president Didier Decoin said he read Mbougar Sarr's work in one sitting, calling it "a very fine book" and "a hymn to literature".

The jury only needed one round of voting to crown Mbougar Sarr.

According to Senegalese news agency APS, the book tells the story of a young Senegalese writer, Diegane Latyr Faye, who discovers a mythical book in Paris called "The Labyrinth of the Inhuman", supposedly published in 1938.

"Diegane is a former student of a military high school in Senegal and a literature student in Paris, which is not far off the author's background," APS noted.

The Goncourt is decided by a jury of seven men and three women, and laureates win just 10 euros ($11.50) in prize money.

But the award guarantees the sale of hundreds of thousands of books.

Already in the Senegalese capital Dakar, booksellers were reporting that their stocks of the book had sold out.

"The stocks were exhausted in our four bookshops" said a manager of the Aux Quatres Vents chain of bookshops in Dakar, just hours after news of Sarr's win had been announced.

"I really want to say: Dad, we have the prize!" Nothomb said after winning.

The Renaudot, seen as complementary to the Goncourt, is announced at the same time and place.