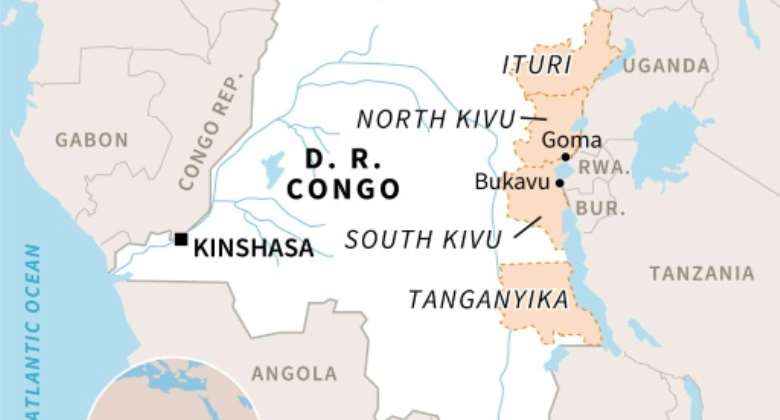 Numerous armed groups have been active in South Kivu province for the past quarter of a century, but the provincial capital Bukavu has not seen such an attack in years.

"We also sadly lost three members of our security forces," he said, two police officers and a soldier.

Ngwabidje said that Bukavu, a city of more than one million people, had been attacked from 1 am by a group targeting several police stations.

"The situation is under control," he said, adding that investigations were under way to identify the attackers.

The region's military commander, Bob Kilubi Ngoy, said the assailants were from a previously unknown group called the CPCA-A64, for Coalition of Congolese Patriots for the Application of Article 64.

The group were seeking to free members who had been arrested by police several days earlier, he said.

The group attacked a military base in a bid to steal ammunition but were pushed back, and then tried to head to the city centre but were also repelled, he added.

"They were desperate to free fellow members."

"It was dark and we preferred to contain them to prevent too much damage," he said, adding that the army launched a "pincer operation" against the assailants at daybreak.

Light and heavy weapons fire continued until the early morning, prompting residents to shelter at home.

The authorities showed off 30 men whom they described as arrested rebels, as well as the 14 seized weapons.

Most of the captives were young, barefoot and wearing civilian clothes.

In the capital Kinshasa, the UN peacekeeping force in DR Congo said it was in "close contact" with the authorities in South Kivu.

"Long-range patrols have been initiated on the three main roads on the outskirts of the city, towards Walungu, Kavumu and Nyangezi," MONUSCO spokesman Mathias Gillmann said.

Most of Bukavu's residents stayed home during the morning after the attack, but gradually resumed normal activities throughout the day, as the army carried out reinforced vehicle and identity checks -- particularly at the entrance to the city.

More than 120 armed groups roam eastern Democratic Republic of Congo, many of them a legacy of regional wars that flared a quarter-century ago.

South Kivu, which lies on the border with Rwanda and Burundi, has been badly hit by their attacks.

Two other troubled provinces, North Kivu and Ituri, were placed under a "stage of siege" in early May -- a decision that placed senior civilian posts under the control of the security forces in a bid to toughen action against armed groups.