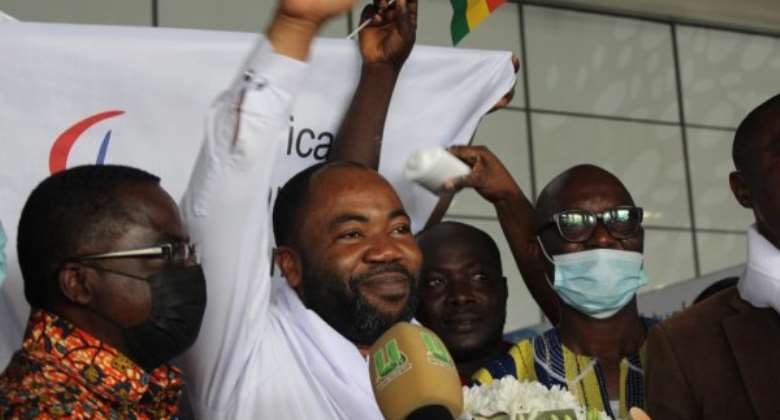 Mr. Deen became the first Ghanaian to assume the position of the President of the APC having defeated Morocco's Hamid El Aouni during the General Assembly in Rabat, Morocco last Sunday.

Speaking to the media on his arrival at the Kotoka International Airport on Wednesday, Mr. Deen was elated about his latest milestone and thanked President Akufo-Addo for the crucial role he played in convincing the General Assembly to opt for him.

“I want to use this platform to say a very big thank you to President Akufo-Addo for his massive support. This battle was between two nations (Ghana and Morocco) and we left the shores of Ghana with the fullest support from the Government of Ghana.

“I want to thank the Sports Minister and his Deputy and other National Paralympic Federations from Africa and especially the West African Federations for their support. We have made it to the top of African sports but it is time to work and I will use this platform to prioritize the all-inclusiveness agenda,” he said.

Mr. Evans Opoku Bobie, Deputy Minister of Youth and Sports who was part of the delegation that went to Morocco, said the government rallied support for Mr. Deen so as to help in the development of para-sports in the country.

He noted that the President pledged to make it possible for Ghana to host a future Paralympic event when Mr. Deen wins the position of which the assembly heeded to.

Mr. Ben Nunoo Mensah, President of Ghana Olympic Committee who was at the airport to welcome his counterpart, was elated with the latest feat achieved by Mr. Deen and hopes his new position would help rejuvenate para-sports in the country.

“Deen deserves all the praise and appellations because it is the highest honour attained by any Ghanaian at both the Olympic and Paralympic level. I pray he works harder in taking para-sports to another level and we will support his course,” he said.