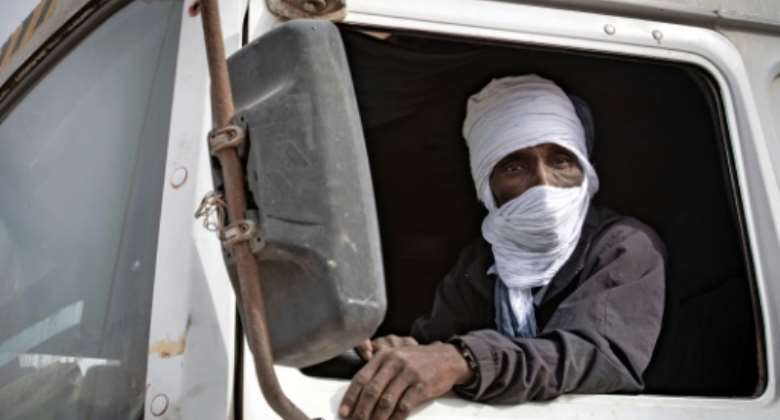 A truck driver crosses the border from Mauritania to Western Sahara on the road to Morocco, in this photograph from November 26, 2020. By FADEL SENNA (AFP)

Algeria has accused arch-rival Morocco of killing three Algerians on a desert highway, as tensions escalate between the neighbours over the contested Western Sahara.

"Three Algerians were assassinated... in a barbaric strike on their trucks", Algeria's presidency said Wednesday, in a statement quoted by the APS state news agency.

It reported the truck drivers had been travelling between the Mauritanian capital Nouakchott northeast to the Algerian city of Ouargla.

"Several factors indicate that the Moroccan occupation forces in the Western Sahara carried out this cowardly assassination with a sophisticated weapon," the statement added. "Their killings will not go unpunished."

Morocco has not officially commented on the accusations, but an informed source from the kingdom said "it has never targeted and will never target Algerian citizens, regardless of the circumstances and the provocations".

The Western Sahara is 80 percent controlled by Morocco, which sees the former Spanish colony, rich in phosphates and adjacent to bountiful Atlantic fishing waters, as an integral part of its own territory.

Algeria has long hosted and supported the Polisario Front, which seeks full independence there and has demanded a referendum as provided for in a 1991 ceasefire deal.

But the Polisario in November declared the truce "null and void" after Moroccan forces broke up a blockade of a highway into Mauritania, that the independence movement said was built in violation of the ceasefire.

Map of northern Africa locating Algeria and Morocco. By (AFP)

On Sunday, Algeria ordered state energy firm Sonatrach to halt gas exports to Spain through a pipeline that traverses Morocco due to tensions with Rabat.

The reported killings took place on Monday, but few details had emerged. The Algerian statement did not specify the location of the strike.

But Akram Kharief, editor of Algerian website Mena Defense, said that "the Algerian truckers were killed in Bir Lahlou", along a 3,500-kilometre (2,200-mile) highway that passes through part of the Western Sahara controlled by the Polisario.

Mauritania has said the deaths did not take place on its territory.

The Moroccan source claimed that the area in question is "exclusively used" by Polisario military vehicles.

The Algerian statement did not say what weapons were used, but Morocco in September took delivery of Turkish-made Bayraktar combat drones, according to Far-Maroc, a private military news website.

United Nations Secretary-General Antonio Guterres has warned that the situation in Western Sahara has "significantly deteriorated" over the past year.

Moroccan youth sit across the border with Algeria, in the city of Oujda on November 3. By FADEL SENNA (AFP)

On Friday, the UN Security Council called for renewed peace talks, in a resolution Algeria slammed as "fundamentally unbalanced".

Former US president Donald Trump broke with long-held diplomatic norms in 2020 to recognise Morocco's claim to the territory, as part of a quid pro quo for Rabat's normalisation of ties with Israel.

His successor Joe Biden's administration has not yet confirmed or rescinded the decision.

Algiers has rejected a return to roundtable talks last held in 2019 with top officials from Morocco, Algeria, Mauritania and the Polisario.

It argues that by avoiding bilateral talks with the Polisario, Rabat was trying to portray the conflict as a "regional, artificial" one rather than one of "decolonisation".