The Rawlings Legacy: Let's get over it 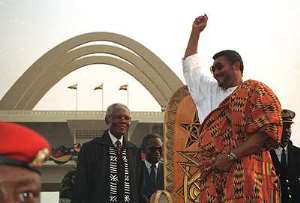 Every country or geographical grouping have certain aspects of history that they would least talk about or would want to forget altogether. Americans have slavery, Germans have Hitler and world war and eastern Europe has communism. Rawlings and his revolution was one of the darkest parts of our history. Experience has shown that the best way forward is to build on the good aspects of history and ditch the bad ones. The June 4 coup of 1979 came just two days after my last 'A' level paper. As a naive 19 year old who knew nothing about life and suffering just joined an equally ignorant group of students in chanting praises to our new found "saviour." Some of us even advocated that any Ghanaian above forty years should be killed, so that the new generation could take over. Our reason being that the elders have failed us. Judging from my thinking at the time, I shouldn't be alive at this present time. In sum we all did help one way or the other in creating a "monster." In as much as a lot of people were hurt and denied of their livelihood I think it is now time to get over this bad side of history and move on to better things. We as a nation has now been enlightened and ushered into a new era. This new era is democratic self government. Having realized that the only way forward is to make our democratic institutions work, it is about time that we put the brakes on anything that will derail our onward march. Let's welcome our former soldiers who were forced into exile, but they must be cautioned that Ghana in these present times do not need their arrival speeches. This country will in no way benefit from their blame it all on the monster speeches. We should strive to let sleeping dogs lie for history cannot be rewritten. Journalists are the watchdogs of society and must play their roles as such. They should concentrate on drawing governments attention to her mistakes, educate the public on current issues and criticize where necessary. Using all energies in waging a media war on the former revolutionaries will not benefit the poor and suffering masses in any way. A third of our population were either not born or too young to understand the events of 1979 and the early 80's. Please tackle issues like poverty, illiteracy and disease. Ghana is ready for two strong parties, in other words there should be two well established political parties in the country. Events on the ground shows that the NDC is way ahead of the other opposition parties. A strong opposition is needed for checks and balances in governance. In other for the NDC to gain the respect of Ghanaians and to be able to present itself as an alternate government in waiting, it needs to purge itself of all the old faces who were part of the revolution. Most of them have blood on their hands and seeing these same faces keep reminding us of a history that we are desperately trying to forget. A new force of dynamic newcomers should emerge in the party. The present government has a critical role to play in this aspect. We do not have enough resources to pay restitution to all who were hurt one way or the other. The key therefore should be education. People need to be impressed upon that opening old wounds will only breed hatred. Vengeance, the good book says is the Lords'. Politicians should refrain from speeches connected to the atrocities of the revolution. They should rather use the mandate given them to lead us into the promise land of economic revival and emancipation. They should strive to create their own part of history that will be cherished for years to come. This is the right time and opportunity to leave a lasting legacy for generations to come. Time is not on our side so we should concentrate on the good things of life. We as ordinary citizens also have a role to play. There is the need to be responsible and to make our voices heard on current issues and to help find solutions instead of always finding reason to blame the "monster." Like it or not we are a country with rich resources yet so poor. Let's think of the fact that in the abundance of water it takes only a fool to be thirsty. Trying to find scapegoats for our predicament will not help either. What is gone is lost, let's guard what is left. The truth is we have always been poor contrary to what some people expect us to believe. Ghana has always been a third world country and still is. It will take a collective effort to effect a change. All hands must be on deck to help save this sinking country of ours. Our children do not deserve to go through what we are experiencing now. This is achievable and can only be done if we put the past behind us and direct all our energies towards the future. If we fail in our duty our children might one day also advocate that all elders should be sent to Siberia. That is my worst fear. WHERE THERE IS NO VISION THE PEOPLE PERISH.