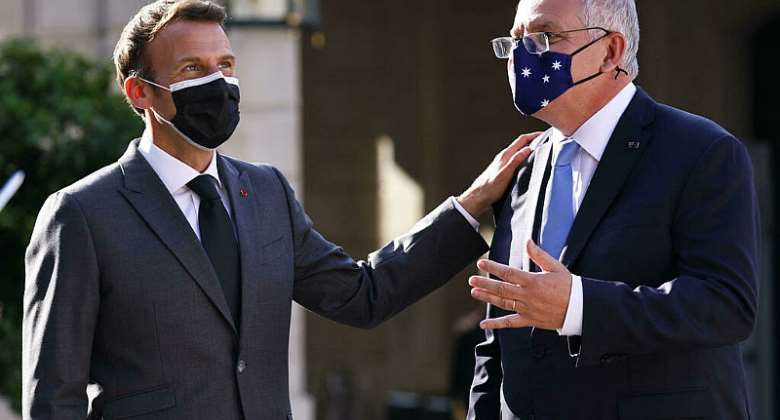 The leaking of French President Emmanuel Macron's text messages to the media by Australia was a “new low” and a warning to other world leaders that their private communications with the Australian government could be weaponized and used against them, the French ambassador said on Wednesday.

French Ambassador to Australia Jean-Pierre Thebault used an address to Australia's National Press Club to make a withering attack on Canberra's surprise decision to scrap a 90 billion Australian dollar (€57,8 billion) contract with France to build a fleet of 12 diesel-electric submarines.

The extraordinarily bitter bilateral spat is heightened by both national leaders seeking reelection early next year.

Doubts are growing about how the relationship can be effectively reset if both Marcon and Morrison remain in charge.

France is undermining international confidence in Australia as its government tries to finalize a free trade deal with the European Union.

Australian media on Tuesday reported the contents of a text message from Macron to Prime Minister Scott Morrison in September in which the French leader asked: “Should I expect good or bad news for our joint submarines ambitions?”

Morrison used it as proof that Macron knew the deal was in doubt after Macron accused the Australian leader of lying during a Paris dinner in June. Macron said Morrison gave him no indication the deal would not go ahead.

France has condemned the leak as a further breach of trust.

“This is an unprecedented new low, in terms of how to proceed and also in terms of truth and trust,” Thebault said.

In the dark
“Doing so... sends a very worrying signal for all heads of state: Beware, in Australia there will be leaks and what you say in confidence to your partners will be eventually used and weaponized against you,” Thebault added.

Rather than prove that Morrison hadn't lied to Marcon, the message suggested Australia had left France in the dark.

Australia canceled the deal when it formed an alliance with US and Britain to acquire a fleet of eight nuclear-powered submarines built with U.S. technology.

Morrison maintains that he did not lie to the French leader and had been clear that conventional submarines would not meet Australia's evolving strategic needs.

Thebault rejected Morrison's account.
"The deceit was intentional,” Thebault said. “The way it was handled was plainly a stab in the back.”

The French ambassador agreed with Macron's assessment that he had been lied to by Morrison on multiple occasions.

“Maybe there is a difference between misleading and lying,” Thebault said.

“But, you know, among heads of states and governments, when you mislead a friend and an ally, you lie to him,” Thebault added.

"Reputation for telling lies"
Malcolm Turnbull, the Australian prime minister who signed the French submarine contract and considers Macron a personal friend, joined the attack on his successor's credibility.

“Scott has always had a reputation for telling lies,” Turnbull told reporters. “He's lied to me on many occasions.”

Asked if the prime minister's office had leaked Macron's text, Morrison did not directly answer.

“I don't think there's any profit for anyone in continuing down this path,” Morrison told reporters in the United Arab Emirates, where he is visiting on his way home from Scotland.

“Claims were made and claims were refuted,” Morrison said. “Australia made the decision not to go ahead with a contract for a submarine that was not going to do the job that Australia needed it to do, and I'll never make any apologies for that decision.”