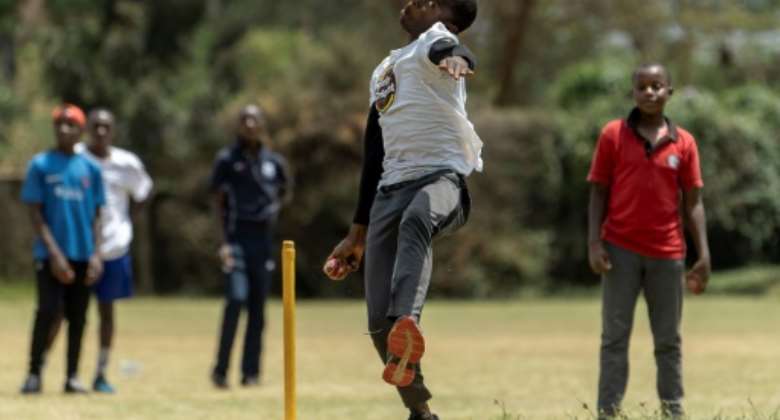 'My dream is to play for Kenya': Ken Mwangi bowls during a training session at the Obuya Cricket Academy. By Tony KARUMBA (AFP)

The slum-dwelling schoolboys batting in the nets in Nairobi are at the heart of an effort to rescue Kenyan cricket from a seemingly endless slump, dogged by poor performances, governance issues and political wrangles.

After the heroics in South Africa in 2003, when Kenya became the first non-Test nation to reach the semi-finals of the World Cup, the country's cricket went into free fall, with little sign of recovery.

But three brothers -- all former international cricketers -- are mounting a fightback by ploughing their earnings into a training academy aimed at rebuilding the sport in Kenya from the ground up.

Founded by ex-Kenyan opener Kennedy Otieno and his brothers David and Collins Obuya in 2006, the Obuya Cricket Academy (OCA) offers training to youngsters from low-income neighbourhoods. It hopes to discover the next Steve Tikolo, the former captan and batting star of 2003, and revive their national team's flagging fortunes.

"Youth development is at the heart of cricket, and our focus was to open the doors for underprivileged children... to play the game to the highest level and keep hope alive," said David Obuya, an ex-Kenya wicketkeeper.

"The response has been tremendous," said Obuya, who is Cricket Kenya's head coach, with dozens of students aged between five and 19 years old training daily at the academy located in Nairobi's upmarket Lavington suburb.

Many parents were happy to sign their children up for lessons, especially when the academy offered to pay their school fees and provide free lunches.

Despite financial constraints, OCA has slowly grown, fielding a team in the Nairobi Provincial Cricket Association (NPCA) Super League since 2019.

The academy has also served as a breeding ground for recruitment by other clubs.

"As a family we have found this very satisfying since we are able to inspire the next generation of Kenyan cricket players," Obuya told AFP.

The league itself has received help from an unexpected quarter, with NCPA teams recruiting players from India.

The move harkens back to the 1980s and 1990s when Kenyan cricket benefited from the presence of Indian sportsmen who signed with clubs in Nairobi to improve their chances of selection in the national squads back home.

They included Ashuman Gaekwad and Sandeep Patil who went on to play for India, with Patil returning to Nairobi in 2003 to coach Kenya and take them to the World Cup semi-finals.

"What they bring to the game is discipline and professionalism that is lacking with the local players."

Currently Indian left-hander Pushkar Sharma, the skipper at Ruaraka Sports Club is tipped to finish as the highest run-scorer of the season in the NCPA league.

The former Mumbai Under-16 cricket captain is eligible to play for Kenya after living in the country for six years.

"My goal (is) to play for Kenya and help revive the game of cricket," Sharma told kenya-cricket.com last month.

Aiming high: A young player takes a swing in the nets. By Tony KARUMBA (AFP)

Back at OCA, former wicketkeeper Otieno said more needed to be done to encourage young Kenyans to pick up a bat.

"Kenya is a country of 50 million people. If you get only five percent to play cricket, you will have achieved what you set out to achieve and give the sport a national outlook," he said.

"Unless we spread the game to counties (outside Nairobi) you wouldn't see that growth. The talent is hidden there."

Meanwhile Cricket Kenya struggles to clean up its act, following its sharp decline over the last two decades due to administrative malpractice and internal strife.

Otieno's young charges are determined to pull off a miracle comeback.

"When I joined I had no idea I would still be here, and even playing in the Super League," said teenage all-rounder Ken Mwangi, who started training at OCA when he was just six and is now one of its rising stars.

"My dream is to play for Kenya in the future."