My President Is Kofi Annan 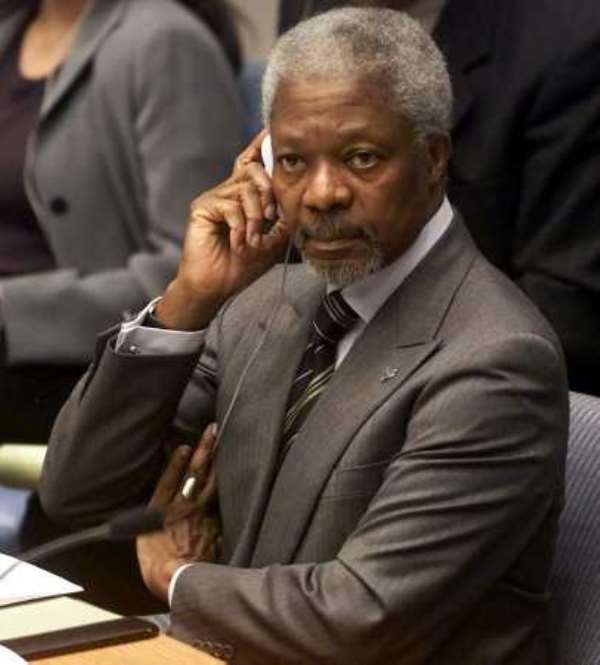 As the world abounds with wars and rumors of wars, many citizens of the United States feel their protests for peace are falling on deaf ears. Such was the case when Karl Rove, chief political adviser to President Bush and an Olympus High School graduate, came to speak at the U. During the question and answer period, a woman asked Rove what citizens who oppose a war in Iraq can do to get the attention of their government. She suggested that the protests across the country, including one in Washington, D.C., where 200,000 protesters were present, failed to gain any attention from the government. After Rove told her that concerned citizens should write their representatives to get their attention, he said, "You talk about the 200,000 people, but with all due respect, I worry about the 3,000 people killed on 9-1-1. We need to see the world as it is, not as it ought to be." This statement drew an angry response from those already frustrated with the Bush administration and its rhetoric of war. For all of those who share that frustration, there is someone listening: U.N. General Secretary and winner of the 2001 Nobel Peace Prize, Kofi Annan. Annan understands "the way the world is" with much farther reaching experience than the folks in the White House. He not only worries about the 3,000 people "on 9-1-1" but also considers the 200,000 in Washington, D.C. Annan, born in Ghana, was educated in Ghana, the United States and Switzerland. His work in the United Nations began in 1962 and has since taken him to assignments all over the globe including Iraq, Yugoslavia, Nigeria, East Timor, Lebanon and Libya. Annan has a very real sense for the way the world is and consequently can serve as a voice for a realistic hope for peace throughout our "global village," as Annan likes to call the world. What is it about Annan that makes him the hope for all of us in the United States who feel their voices have been shunned? Let's review his statements and actions compared to the Machiavellians in the White House.

First, a statement made by Annan the day before Rove spoke at the U provides insight. Annan issued a statement that the London Guardian called, "his sternest warning yet to George Bush," urging Bush to be "a bit patient."

Patience has been fundamental to Annan's strategy toward the Sept. 11 attacks. At a press conference this November, Annan spoke in regards to this strategy, saying, "I noticed that there was some impatience at our not moving fast enough. But, as I indicated, this is the way democracy works. I think the outcome and how this issue evolves can strengthen the United Nations and multilateralism."

In an address to the U.N. Assembly on Sept. 24, 2001, Annan said, "Let us respond to it in a way that strengthens international peace and security--by cementing the ties among nations, and not subjecting them to new strains. Let us reject the path of violence, which is the product of nihilism and despair. Let us prove by our actions that there is no need to despair; that the political and economic problems of our time can be solved peacefully; and that no human life should be sacrificed, because every human being has cause to hope."

Another theme radiating from Annan's strong sense of humanity is cooperation on the global level and the irrelevance of national borders when dealing with issues that affect all people, such as the environment.

Nations across the planet have grown weary of the Bush administration's decision to relinquish itself from international obligations and treaties by opting to take the unilateral road.

Again, the London Guardian is right on the toes of Bush, Rove and all the good ol' boys in the White House. In a March 30, 2001 editorial, the Guardian wrote, "Instead of leading the community of nations, Bush's America seems increasingly intent on confronting it. Instead of a shining city on the hill, the world sees a dark smokestack belching fumes. From a nation that began heroically by trumpeting its belief in universal values comes a devastatingly different, divisive and nationalistic jingle: We do what we want, for ourselves, regardless of consequences for you. And if you don't like it, well tough."

For these reasons, and many more, the bumper sticker on my car says, "My President is Kofi Annan!" Dan welcomes feedback at [email protected]