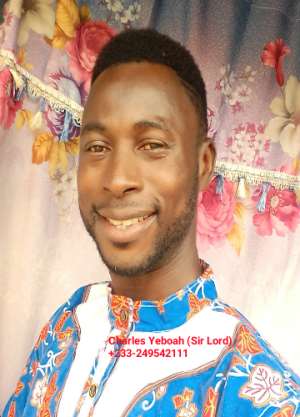 During the time Nana Yaw Twene reigned _Dikuro_ or Chief of Goka, the rich Yeboah clan employed the services of Frafra migrant family as farm hands.

The head of the Frafra family was called Atarepagna. He was strong and always ready to work according to his remuneration and even beyond it.

In times of attacks by invading hustlers thieves, Atarepagna has been deployed at the services of the Chief to fight off heists, maintaining the peace and tranquility of Goka.

His good services endeared him to the patriarch of the Yeboah clan, and in an unheard-of-before move, first of its kind even on Bono land, Atarepagna was married to a beautiful maiden amongst the rich royal clan to make him party to their vast estates, and a Goka native.

With this beautiful maiden Atarepagna fathered his exact picture, stature, and strength in a a baby boy. He was named Atarepagna Junior, and his other name Yeboah, as though is the clan's surname, should be his first name, he was known and called by all the indigenes and aliens of Goka as Atarepagna (Junior).

When he came of age, and his father senior Atarepagna was called to eternal glory by old age and scars of servitude, Atarepagna Junior buried his father in the reserved cemetery of the Yeboah clan, after solemnities of state funeral that saw the Chief of Goka himself in attendance.

Soon after the senior Atarepagna was entombed, emissaries came from the Paramountcy of the Suma Ahenkuro palace to the Goka Chief announcing that, as the _Adonteng_ (Youth warrior leader) to the Paramountcy, he was to mobilise strong men to fend off reported invasion of the Ashantis who are bent on pillaging priced Bono artefacts kept in two safes on the Bono lands. One in the rainforest reserves of Suma Ahenkuro, and the other in the valleys surrounded as nature's ramparts by giant stones at Buoyam.

Should the Ashantis succeed, they'll plunder the sagely Adinkrah symbols, the prototype of _Akofena_ (sword of authority), and the golden basins used by the wives of the Bono monarchs.

The exploits of senior Atarepagna in such wars was brought to remembrance, and the Chief of Goka wished he could have the holy magic wand as did the Biblical Jesus Christ who woke up his friend Lazarus from death, to lead this defence. But hopes can't cause dead bones to arm and out for a battle. More so the deceased in question died of weak bones that cannot have a strong grip on a handle of a sword.

Atarepagna Junior saw the praises showered on his dead father as a clarion call to showcase his mettle, that he didn't just pick the cosmetic features of his father, but his mental and physical strengths also.

He dashed to the father's room, and emptied his chest, chancing upon his pristine armoury that consisted of sword, bow and _Trontra_ (a smock that warriors wore as a shield).

Atarepagna Junior presented himself to serve in the army of the Chief.

The invading Ashantis were crafty, and resorted to a guerilla warfare. They attack on the blindside of their victims, and recoil to their hideouts.

It was rumoured that they had fierce lions amongst their battalions, and their roars alone saw opponents shivered, and in many of their attacks, they've conquered and subjugated the Fantes and the Denkyiras.

This hyped fearsome history sensationally associated with the Ashanti army never deterred Atarepagna. From his father, he'd learnt how _'courage alone can march a lone brave warrior against a thousand enemies.'_ And that, _'the morale needed by one fearless warrior at the battlefront is three times higher than the combined strengths of three thousand demoralised coward fighters.'_

This show of courage and morale strength he'd shown lately when some sea lions on their season invaded the shores of the Lake Goka, pouncing on the women who went to fetch water home, killing one, injuring three, and breaking the pots of six. The canines were, as done occasionally, to feast on the sacred fishes of the Lake Goka that were not a delicacy to the aborigines. And the women were a hindrance to them, hence the deadly attack.

Atarepagna alone with his stick chased the beasts and bludgeoned to death three of them, whose heads were hanged as trophies at the museum of the Goka palace even up to today.

Before the Goka Chief mobilised his men and set on the journey of rescue of the vestiges of Bono heritage, as in those days information was relayed through _Fɔntɔnfrɔm_ (drums), it was sounded from the Suma Palace that the Ashantis were approaching with their fierce lions this time too.

That didn't scare Atarepagna one bit.

The Bono people say: _he that has eaten crab when he attempts chewing calabash, we don't doubt him._

With his stick, he'd chased and killed sea lions, why should a domesticated lion scare him now that he's in full armoury?

He surged forward, and in swift attack on the enemy soldiers, Atarepagna alone marauded the shrewish Ashantis at a spot called _Mangye,_ as the Bono warriors refused the bribery paid them by the defeatist Ashantis so they can go home and report their drubbing to their superiors at Manhyia palace.

After they were put to the sword, and some were seized as plunders and booties of war, it was discovered that indeed the Ashantis were crafty. It wasn't a lion they had in their army, but a carved drum that when beaten roars as a fierce lion.

This discovery facilitated and eased the defeat of the second Ashanti battalions who were approaching Buoyam where the chunk of Bono riches were kept for safekeeping.

Atarepagna with three captains from the Suma Ahenkuro palace, commanded by the Goka Chief, they raced on foot and besieged the Ashanti fighters, as those from the high rocks of Buoyam enclosed and hemmed them in, and that day's casualty, if the Goka chief at the lead of the Bono warriors has not taken the olive branch the Ashantis stretched to cease fire, the Ashanti heritage would have by now wiped from the surface of the earth.

A truce was signed, and it has existed inviolate till today, with the Ashantis and their Bono cousins coexisting in a Democratic Republican Ghana.

Atarepagna was given the highest honour and a medal of the Bono land. He outlived the Goka Chief, and with a royal blood of maternal inheritance, he was pronounced a defacto leader of Goka until his demise.

And when he died in his ripe age, a statue of his was erected at the Goka Town Square, and his name was Bononised (accepted as a Bono name), with the rich Yeboah clan of Goka still having their dynasties bearing the strongest warrior Atarepagna's name.

This story is fictional, written to promote Bono heritage in motion pictures. For partnership of any kind, contact the writer.

Ghana’s economic woes has nothing to do with E-Levy; just st...
28 minutes ago