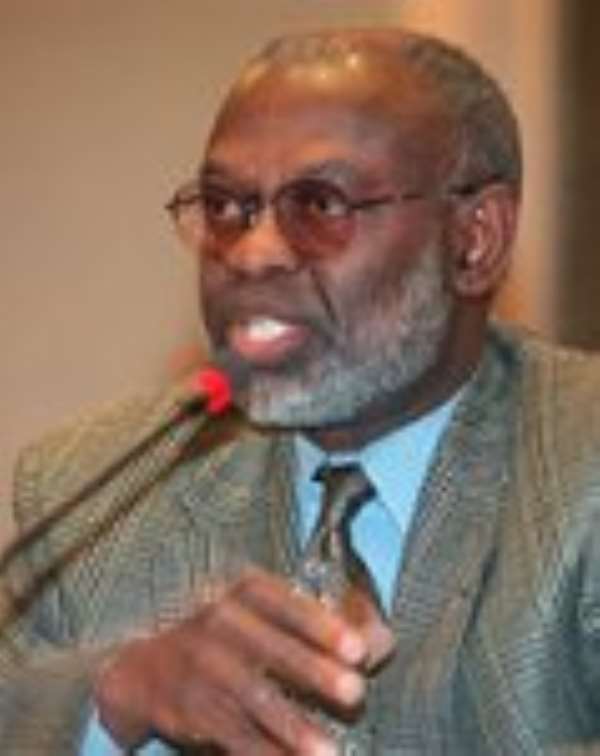 Dr Kwasi Botchwey (the anglicized version of his name is difficult to spell) must seriously reconsider his decision to seek the Presidency of Ghana. Anyone who aspires to that high office must be a person who lives above reproach. To say this is not to say, however, that we need perfect people to lead our country -- there cannot be any perfect people. But our politicians should have no skeletons in their closets, so to speak. In more advanced democracies, politicians could fail to muster enough votes just because they, for instance, have smoked marijuana before, or they have been given too many speed tickets, or they have beaten their wives before, or for doing something as seemingly innocuous as plagiarisation in writing a term paper or an assignment. President Bill Clinton nearly lost the American Presidency because he " had improper relations" (the way he chose to put it) with a young woman. On the contrary, 'President' Rawlings rained blows on his vice-President and still remained in office, even going on to win a second term of office. Here, as long as you have a university degree, especially a Ph.D., you are seen to be in possession of the requisite credentials for high political office. Or once you hold the reins of office nothing, even committing the most despicable of offences, can dislodge you from power. In our part of the world, it appears that morality and good conduct have nothing to do with how we make it to the top of the political ladder, or how we remain there. Dr. Botchwey started, and nurtured, a high profile extra-marital affair with a high-ranking diplomat, the Canadian High Commissioner to Ghana, and yet felt no qualm about it. Some may say that it was his private life and he could do anything with it. Yes, in a sense they may be right because we live in a country where polygamy is permissible under the law; so in principle he did nothing wrong. But in reality, before we jump to the typical African conclusion that a man is free to swing his rod as he pleases, we must consider the fact that our sub-region -- sub-Saharan Africa -- is being devastated slowly by the AIDS epidemic; and the only way we can stem the tide of this advancing plague is to maintain a high degree of morality, which includes striving to avoid promiscuous lifestyles (just a moment ago I came across a Ghanaweb news story which prognosticates that by 2009, 120 Ghanaians will die every day from AIDS). Please do not misunderstand where I am going with this. This is not about the Christian principle of moral chastity, or any puritanical call to religious rectitude. This is about political correctness and plain common sense. One of the most important issues that African politicians need to address is the embarrassing AIDS scourge which is sweeping across the continent of Africa. And as a potential President of Ghana I expect it to be very high on Kwasi Botchwey's agenda if he becomes President. But how would Kwasi Botchwey, hypothetically, sensitise the people of Ghana to the need for an AIDS watch, i.e. stressing to Ghanaians the need to shun promiscuous lifestyles and sticking to one woman, when he himself has shown by a brazen and shameless example that there is no need for this. How could he convince our nation, and other African countries, that one of the ways to check the spread of the epidemic is to avoid having affairs, when he has even admitted his own extra-marital shenanigans publicly and shown no remorse whatsoever for them. In fact, Kwasi Botchwey's marriage collapsed due in principal part to his affairs and not, as he has tried to make the world believe, the pressures his job as finance minister exerted on his home. In short, Kwasi Botchwey has compromised his credibility to lead Ghana, and Africa, in the fight against AIDS, which should be high on the agenda of every country, at least south of the Sahara. Unless he can come out and publicly admit his moral excesses and explain to the people of Ghana how much he loathes sexual promiscuity, how much he has come to regret his actions, and how well he is determined to encourage Ghanaians to be chaste, he could not have the courage to lead the fight against AIDS. Our continent is being decimated by the AIDS epidemic. We are dying a slow but sure death. Like a field of lava which flows slowly but inexorably down a volcanic mountain, the AIDS scare is moving menacingly over the face of Black Africa. Unless our politicians get their act together and put in place strong policies to check promiscuity, including even some high-handed methods, we are all going to be annihilated by the turn of the century. In a fight like this we certainly don't want to recruit warriors like Kwasi Botchwey who have already compromised their fighting skills by succumbing themselves to sexual immorality. What message do such people have to tell the people of Ghana when it comes to talking about the dangers of Aids. And any politician in Africa today who would not put a high priority on AIDS is not worth our votes. Kwasi Botchwey should, at this point, hang his gloves and quit the fight to become President of Ghana. B.K. OBENG-DIAWUOH BARDSTOWN, KENTUCKY, USA