In Defense of Per-diem Millionaire 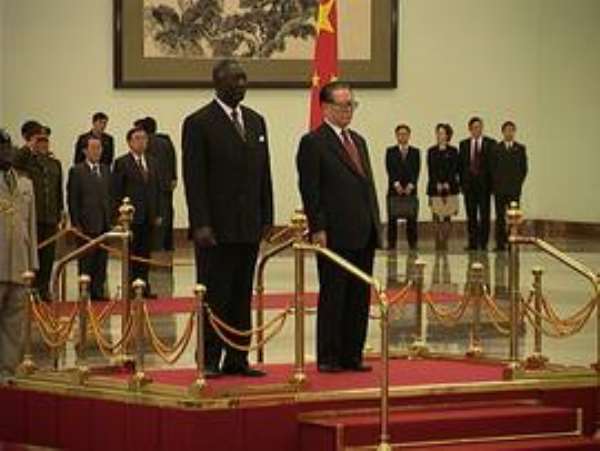 Many, including yours truly, have lambasted the President for supervising the greatest scam in the history of Ghana - the now too infamous IF*C saga. We have also been witnesses to how the blame is gradually being shifted from the President to Osafo-Marfo, JH and Paul Acquah. But is the President really to blame? No, blame it on his numerous travels. Due to the heavy travel schedule of the President, he has really not had the opportunity to stay at home and supervise his men. He has had no choice but to put Government on auto-pilot. Whenever the President takes a break from his travels to visit Ghana, his advisors and confidantes merely feed him with what he wants to hear. After being assured that all is well, he starts planning his next trip. Recall that when the IF*C story broke, the President was in South Africa. Many were those of us who were expecting him to inject a whiff of sanity into the system during his momentary stop-over in Ghana, but before we could say "JAK", he had hopped onto the next plane bound for Senegal without a word on IF*C. We however excused the President knowing very well that he was too busy travelling to bother about what would have been the biggest one-time capital infusion into Ghana. Others suspected that he was maintaining his silence so he would be able to shift blame to the IF*C trio, should the scheme implode. Many weeks passed, with the "Sleeping Giant" maintaining a dignified silence. Having visited Malaysia to learn about the wonders of Palm Trees and the need for more Ministers, the Per-diem Millionaire decided to share his experiences with Ghanaians through a "meet the press" function. Wofa Z had no option but to parrot what Osafo-Marfo had told him. "You have all heard about the IFC Loan and I know you ladies and gentlemen are dying to question me about it. So let me give you some of the facts and background. When government assumed office, it was obvious that the financing needed to bring Ghana’s infrastructure up to acceptable modern standards was not going to be available from our own budgets or from the traditional sources of multilateral lending. We had to call upon the vastly greater resources of the private capital market. It was with this background that when government was approached, it agreed to talk with the IFC about a $1b loan facility specifically for infrastructure development. Everywhere else in the world, governments have resorted to loans to build their infrastructure. Within the capacity of government, due diligence was made to ensure that the Consortium was made up of serious and reputable entities." When Ghanaians heard these words, there were resounding shouts of "Osee yei!" What had been looking like a gari and bankye christmas had started looking more like the akoko Christmas that the Per-Diem Millionaire had promised. The more discerning however saw this as the first phase of an exit strategy. Gov't spokesman Kofi Amponsah Bediako would however not keep his mouth shut. He kept insisting that the "mother of all loans" was coming and the mouths of Ghanaians kept watering. The moment of truth is finally here. Wofa Z now wants to "forgo" the $1 Billion according to the Accra Mail newspaper, an NPP mouth-piece. Before Ghanaians, who are now faced with the reality of gari and bankye this christmas, jump on top of Wofa to rouse him from his slumber in a bid to give him a dose of reality, let me put in a word for him. Blame not Wofa. Blame the Per-Diem. Patriot Turncoat Social Commentator (Ghanaweb’s SayItLoud)