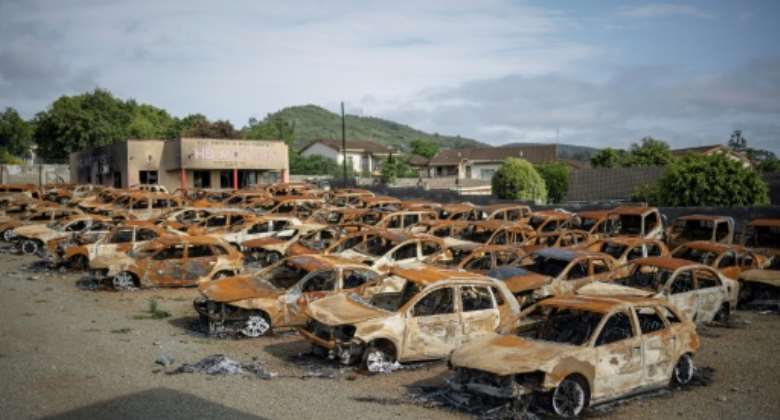 Workers, civil servants and even high-school students have taken to the streets, clashing with police in the tiny southern African kingdom. By Michele Spatari (AFP)

For decades, Raymond's family has been growing maize and rearing chickens on land entrusted to the king of Eswatini, Africa's last absolute monarch and one of its richest royals.

Now Raymond's 17-year-old son has a rubber bullet lodged in his back, shot last week after stumbling into a pro-democracy protest on his way to play football.

In the worst unrest to hit the usually peaceful former British colony, dozens of people have been injured since demonstrations first broke out in June and flared again this month. At least 37 people have been killed since June.

"Many people are calling for democratic change," said 42-year-old Raymond in siSwati, not wanting to give his real name. He expresses concern but shy excitement about the uprising.

Workers, civil servants and even high-school students have taken to the streets, clashing with police in the tiny southern African kingdom to demand direct elections, better pay and the release of two pro-democracy lawmakers arrested in July.

Discontent has since spread from the main city of Manzini to the surrounding green hills, often cloaked in mist, where Raymond and seven family members live in small cement homes with corrugated iron roofs.

The rubber bullet in his son's back has made the farmer more vocal about Eswatini's convoluted political system. By Michele Spatari (AFP)

The rubber bullet in his son's back has made the farmer more vocal about Eswatini's convoluted political system, which bans political parties from parliament and allows the king to handpick ministers.

"We are thankful to the king," Raymond told AFP. "However our life has not been good," he said, clicking his fingers anxiously as chicken pecked the ground.

"Maybe, in the future, it will be possible for us to be ruled by a president."

Large potholes cover the winding tarmac road down through the hills to Manzini, the economic hub of landlocked Eswatini's 1.2 million inhabitants.

Almost 60 percent of the population lived below the national poverty line before the pandemic, according to the World Bank, and Covid-linked inflation has only made matters worse.

Speaking to AFP and elegantly draped in red traditional cloth, gold watch on his wrist, Deputy Prime Minister Themba Masuku insisted on Friday that King Mswati III would engage in January after emerging from his annual three-month retreat.

"I would agree with those who say we need to have some change," he said, sitting behind his desk in the nearby capital Mbabane.

The palace banned protests last week and the promise of dialogue followed the intervention of African mediators. By Michele Spatari (AFP)

The palace has banned protests and the promise of dialogue follows the intervention of African mediators. Activists do not believe the offer of talks is genuine.

Mswati, who succeeded his revered father Sobhuza II in 1986, has been accused of draining public coffers.

The 53-year-old monarch's annual salary, paid by the government, was last reported at around $60 million (52 million euros).

He holds stakes in Eswatini's main companies -- including one of Africa's largest sugar producers -- and caused uproar in 2019 for allegedly gifting Roll Royces and BMWs to his 15 wives.

"(People) can't elect a government of their choice, they pay tax but they can't hold (it) accountable", he told AFP from a run-down office in Manzini, sitting in the dark due to a power cut.

Last Thursday, a small group of textile workers gathered nervously outside a supermarket in Manzini, holding umbrellas against a cold morning drizzle.

Unions had planned a mass protest that day, but fear and the weather deterred participants. Only a handful of women showed up.

The group walked timidly to a nearby minibus taxi rank. They unzipped their jumpers to reveal red union T-shirts and reached into their handbags for matching caps.

"I am worker and (yet) I am dressed like this," she exclaimed, pointing to her worn-out purple fleece and tattered skirt.

Police allowed the women to sing a few songs then ushered them away.

In the industrial town of Matsapha, vegetable seller Wonder Mkabela is mainly concerned about his business.

Like many vendors in the area, he sells the bulk of his goods to factory employees on their way home from work.

"If they toyi-toyi (protest), how can I earn a living?" he asked.