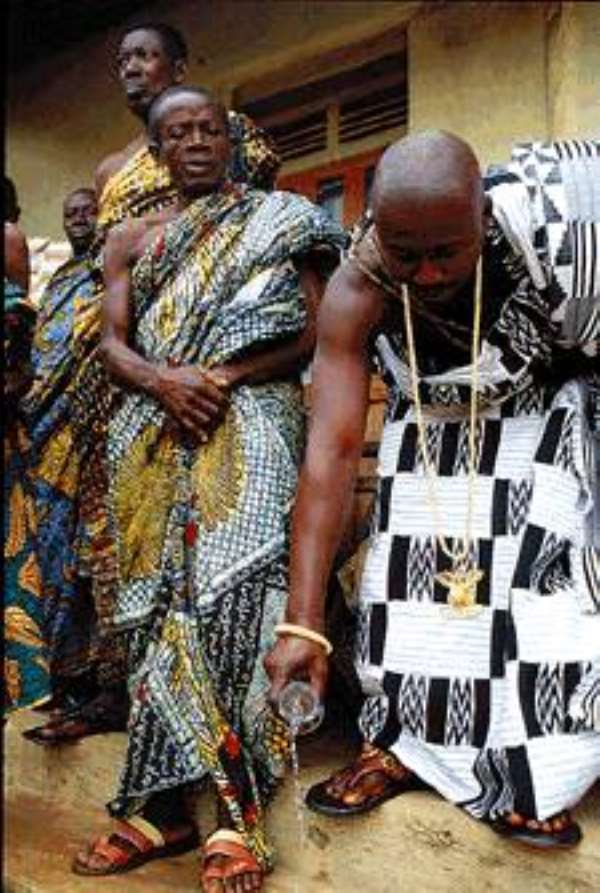 The recent utterances by some influential policy makers to ban libation demonstrate limitations in the thinking of certain people with whom we have entrusted power. It also shows their inability to understand the very purpose of their functions. Needless to say, Ghana is a secular state, and I hope that has not changed since the Minister for Asante Region and the Deputy Minister for Local Government took office. The degree of narrow-mindedness shown by these policy makers is widespread among Christians in our dear country. I wonder why these politicians do not fancy resigning from their posts to become evangelists. Their statements should have been condemned by policy makers and Christian leaders of all persuasions since they can contribute towards religious intolerance. I understand Dr. Nduom has written against such a dogmatic perspective on other religions. Ghana prides itself for having people of different religions and ethnicity live together, and we should not allow ! ourselves to be influenced by misguided utterances. Before the Europeans colonised Ghana, there was a flourishing religion, practised by all peoples of Ghana. I prefer not to refer to Ghanaian religion as traditional because of the derogatory implications. It is not the most respectful way of characterising the faith of my ancestors. GHANAISM uses libation as a means of praying to GOD. Libation has been the way of communicating with GOD, and it has pleased HIM to bless us with all the values, norms and ideas, which helped Ghana to be a country of abundance and order. As a youngman, when libation was frequently poured and GHANAISM was effectively practised in my town, there were limited thefts and violence. Armed robbery was non-existent. You could lose something on the streets but nobody would touch it. I do not need to remind you how things have changed since we tried to attack our cultural values under the pretext of Christianity. The basic necessity of life – FOOD – was never a problem in Ghana when the help of GOD was sought through libation at the beginning of the farming season, and young men were encouraged to toil for their livelihood, and the community rewarded them for their hard work.

Nowadays, we are building our treasures in heaven whilst begging for food from nations, which are less endowed in resources than we are. Due to laziness and the desire to become rich easily, many able-bodied men are becoming Christian priests overnight. Ghana is producing the so-called charismatic, Pentecostal priests at a much faster rate than any other profession! The greediness of these priests is demonstrated by their desire to build a church around their families and their luxurious lifestyle, citing out-of context phrases from the Bible to justify it. These priests disappear for two weeks and come back with titles such as Professor, Dr, Bishop, Apostle and Evangelist just to prey on the ignorance of desperate people.

The assault on our culture is led by these charismatic, pentecostal priests and their congregation who think they know but do not understand anything, not even about their own religion. Otherwise they will be tolerant towards other faith. I have never met a GHANAIST who judges the fate and spirituality of believers of other religions. To me, this demonstrates the spiritual maturity of the GHANAIST and his belief in the unity of God.

Christians are quick to condemn other religions, forgetting about the limitations of their own religion. I will like to mention few observations about charismatic priests and their congregation:

· The greater majority of them have never bothered to read the history of the Christian Church besides what is in the New Testament. They do not even know how the Bible was put together by the Roman Catholic Church. They speak derogatory about the Roman Church, forgetting that without the Roman Church, there would not have been the 66 books contained in the Bible.

· They do not know that the God of the Bible has serious limitations. He is easily influenced by the behaviour of HIS creations to commit sins. For example, in Genesis he says that he is a JEALOUS God who punishes generations for the sins of their fathers. Of whom is he jealous? Unless he is competing with other Gods with superior qualities. Through his ANGER, he consumes Sodom and Gommorah with fire; He caused REVENGE and killed Moses because Moses disobeyed him by striking a stick against a rock instead of pointing the stick at it. A very flimsy excuse for destroying own creation. The Greek God Osiris had much better enlightened attributes.

· Jesus is presented as the Messiah. But all the actions attributed to Jesus were also attributed to Osiris (Greek God) centuries before Jesus was born. Osiris was said to have been born by a virgin; he died, was ressurected from the grave and would come back to judge the living; he raised the dead, walked on the sea, and turned water into wine, and fed multitude. Osiris celebrated a communion of bread and wine with his disciples. These similarities with Christ caused such an anxiety that church philosophers in the 2nd century concluded that the Devil sent Osiris to mimic the miracles of Jesus such that if the true Messiah came people would be confused to realise him. Only a pathetic God could allow this to happen to his Anointed!

· Jesus was said to have gone to Jerusalem on a donkey with the women raising and cheering him with palm leaves. In fact it was Macabees (a Jewish Messiah and Warrior) who, history attests, rode on the donkey and got this fantastic welcome. In the first century, the rate at which Israel produced Messiahs is comparable to the rate at which Ghana is producing anointed charismatic priests.

· They do not know that there were many books, which the Roman Church did not include in the Bible because they wanted to control what people should read. The Gospel of Thomas doubts the resurrection of Jesus; and the Gospels of Peter and Mary gave a human dimension of Jesus than in the Bible. He had a brother, James who succeeded him as the leader of the Jerusalem Church. Christians will be quick to point out that James was a cousin. I am amazed about their source of information. The Bible does not say so; church history and other literature do not confirm it. The Roman Church even killed people for possessing books, which they did not authorise. Why should the Church kill “sinners” when they preached that there would be a judgement day?

· Jesus was not God, until AD 325 when Bishops met at Nicaea in Bithynia (Turkey) to declare him one. The meeting was presided over by Emperor Constantine who claimed that a vision of Christ helped him win his war. Christ of Peace is linked with war and violence! Part of the Christian Bishops who met at Nicaea disputed the divinity of Jesus. Constantine banished Arius the leader of the dissenting Bishops. Strangely, it was Constantine, a Roman warrior and a non-baptised Christian who inserted the word “homoosious” (“of one substance”), in the document prepared by the Council, which made Jesus God. Why should a group of mortal men, who never witnessed the life of Jesus pronounce him God? Why should they need a signed document? We in Ghana follow this doctrine without questioning it. I am not surprised because we were brought up (as children) believing that Jerusalem was in heaven. If you did not go to church you were punished. We never had the chance to examine the value of C! hristianity with an open mind. Within the same mind set, policy makers-turned-Christians have become theologians and are exposing their ignorance by speaking against libation – a Ghanaian religious practice, which does not infringe on the right of anyone.

What whatever began in the first century AD, was a Jewish movement, typical of the rough years of Israel’s history. If it means something to a Ghanaian of the 21st century fair enough. But those who do not see any value in that movement should not be insulted and banished but left alone