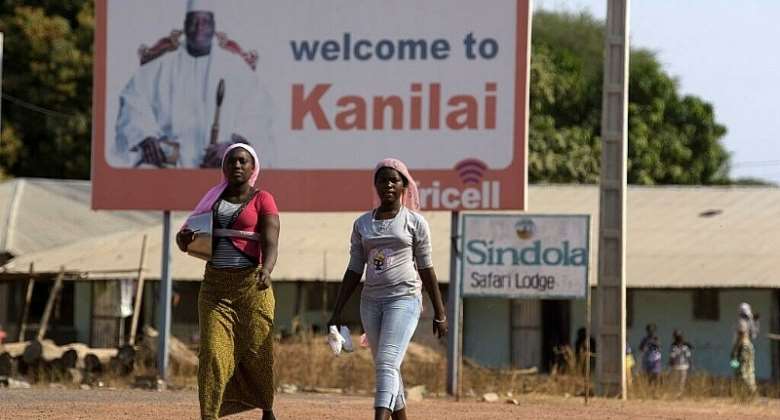 The Gambia's former President Yahya Jammeh has turned down an offer to join forces with incumbent President Adama Barrow in the upcoming presidential election. The exiled politician told his supporters the move to form an alliance was without his consent.

In a telephone address to thousands of his supporters gathered in his home village of Kanilai, Jammeh, who has been living in exile in Equatorial Guinea since his election defeat in 2016, declared himself as legitimate leader of his party and fired the leadership for forming an alliance with his successor.

In exile for the past four years, Jammeh remains influential in the Alliance for Patriotic Reorientation and Construction (APRC) party. Recently hundreds of supporters converged at his hometown, Kanilai to listen to a phone call Jammeh made from his base in Equatorial Guinea.

During the telephone address, Jammeh told his supporters that he sacked the entire APRC executive for forming an alliance with President Barrow without his consent and says he has taken over the party.

“As from today, I want to make it very clear that I have taken full leadership of the APRC party as stated in the Constitution of the APRC,” he said.

“I'm the Supreme leader, I am the flag bearer and I am the party chairman and I want to make this announcement very clear,” he added.

Spokesman Dodou Jah of the expelled APRC party, says Jammeh has no authority to take over the party, therefore the APRC/NPP alliance remains.

“I don't think there's any APRC of Yahya Jammeh-- this country has laws, the electoral laws are part of the laws of the land -- no political party can have two executives,” Dodou Jah, spokesman of the expelled APRC party.

“The name of executives that are chosen by Congress will be submitted to the independent electoral commission together with their position so the IEC have records of who are in charge of the party, who are the leadership.” he told Africa Calling at a massive rally in downtown Sukuta.

The APRC executive did everything possible to facilitate Jammeh's return, Jah said, but they cannot help him now that he rejected an alliance agreement that would have made his return easy.

NPP's Reaction
President Barrow's National People's Party (NPP) deputy spokesman Seedy Njie, who was Jammeh's Information minister during the 2016 political impasse, says Barrow is committed to working with APRC. He says Jammeh's move is no threat to their quest for reelection.

“The alliance between the APRC and NPP is intact and we are focusing more than usual on our policies and programs and also for President Adama Barrow's reelection on December 4th, 2021,” he said.

Jammeh's refusal to accept a hand extended by President Barrow has been a subject of debate in the country. Political science lecturer at the University of the Gambia Essa Njie says Jammeh would understand that Barrow cannot grant him amnesty as claimed by the expelled APRC leaders.

“Seeing Jammeh to come out and make such statements shows one thing-- that the interest they are both looking for probably is not there,” said Essa Njie, political science lecturer at the University of the Gambia in Banjul.

The news of alliance between the two parties sent shock waves across the country, especially for victims of human rights violations committed under Jammeh. To them, even the split is no assurance justice will be served. The day after Jammeh announced the non-alliance, victims marched for justice.

“I don't know about other people but I knew from the beginning that Jammeh and Barrow will not do anything progressive and their alliance will not last long,” said Nyima Sonko, wife of Solo Sandeng, a political activist who was killed by the alleged notorious National Intelligence Agency under Jammeh's regime.

“Jammeh oppressed us and killed our people; we fought that oppression by voting for Barrow because we had so much hope in him, and for that, the same Barrow betrayed us. No, our gods are not sleeping,” she added.

As the election approaches, many APRC supporters were hoping for Jammeh's return if Barrow wins the December polls. As it stands, the supposed amnesty program the expelled APRC executive claimed to have lobbied for Jammeh is now uncertain.