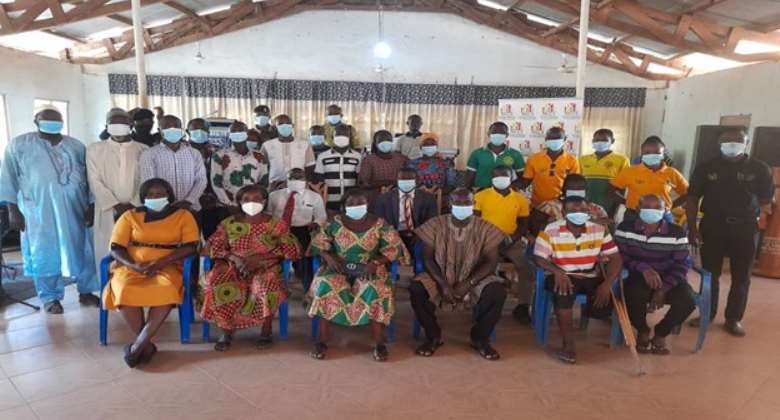 The National Commission For Civic Education NCCE has underscored the important role of stakeholders in the attainment of national cohesion and inclusive participation in governance.

This came to light at a meeting with members of the Sene East district Inter Party Dialogue Committee IPDC at Kajaji in the Bono East region.

The meeting under the theme: "Empowering Ghanaians to Stand for National Cohesion and Inclusive Participation" forms part of the NCCE and Ministry of National Security sensitization campaign on Peace Building and Community Based Mechanism for Countering Violent Extremism.

Speaking on the essence of the meeting, the district director of the Commission Mr. Frank Dzakpasu said the recent surge in armed robberies, murders, threats of foreign insurgents and secessionist activities makes it imperative to equip key stakeholders with the requisite information to help deal with the situation.

He said his outfit is exploring other platforms like churches, mosques and community engagements to ensure the objectives of the project are attained.

The Bono East Regional Director of the Commission Mr. Joseph Kwaku Yeboah took the meeting through the Public Order Act 491 of 1994, the Vigilantism and Related Offences Act 999 of 2019, Alternative Dispute Resolution ADR and activities of secessionist groups in Ghana.

He said it is in the interest of public event organizers to notify the police of their intentions at least 5 days prior to the event to enable them prepare to provide the necessary security.

Mr. Yeboah told the gathering that vigilantism is at the heart of insurgent activities currently taking place in the sub-region adding that severe punishment ranging between 10 to 25 years imprisonment awaits those who form, promote, finance, aid and abet vigilantism activities in Ghana.

He described ADR as a win-win situation for contesting parties instead of the win-lose situation that pertains in the law courts and advised all to adopt that mechanism in the resolution of disputes adding that it is efficient, less costly and less time consuming.

The regional director traced the history of the activities of the Western Togoland secessionist group and said the results of the 1956 plebiscite gave a clear indication that 58% of voters were in favor of being part of the then Gold Coast. He said conditions that drive secessionist activities like marginalization, repression, ethnic and religious tensions are not evident in Ghana ascribing the motivation of the group to other ulterior motives.

General Lance Corporal Agbottah Kplorla who deputized for the district police commander urged the public to be proactive and forthcoming with information to the police to enable them deal effectively with crime assuring them that their identity will always be treated with confidence.

He admonished them not to obstruct justice but allow the law to work since punishments serve as a deterrent to would-be offenders.

The presentations were preceded by a film show on political violence and its effects which underscored the need to work towards peace at all times.

Stakeholders which included representatives of political parties, traditional authorities, faith based organizations, heads of department, women and youth groups and person’s with disability (PWDs) made various suggestions towards the achievement of the project objectives whiles affirming their commitment to the same course in a joint statement.

One confirmed dead in youth, Police clash at Kotobabi Market
11 minutes ago