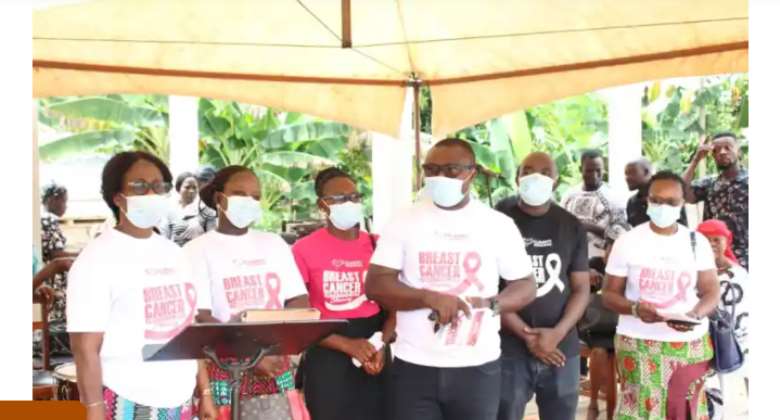 After a spirited breast cancer sensitisation programme in Ahafo Region, Claanti Foundation, a non-governmental organization (NGO), has climaxed the event with a health screening for women in the region.

The programme, which relied on health practitioners of the St. Elizabeth Catholic Hospital in Hwidiem was sponsored by Germany-based GINGKO Analytics GmbH and GINGKO Management Consulting GmbH, centered on breast cancer screening for the rural folks as part of the ‘Pink October’ events that were held worldwide to save women.

The campaign which began on Tuesday, October 19, 2021, is to create awareness and educate women in the Ahafo area on the dangers associated with the failure to do breast screening.

According to the Senior Manager of Claanti Foundation, Mr. Owusu Yaw Ansah, the programme enlightened women and men about early detection, treatment, impact, and ways to prevent breast cancer.

The Foundation screened over 250 women from Tuesday, 26th to 29th October 2021 for breast cancer, the most commonest cancer in African Women.

Those whose breasts had lumps have been referred to the hospital for the initial treatment while Claanti Foundation supports them financially.

Health professionals also offered advice to the women that the disease was curable if detected early and appropriate treatment instituted.

The Foundation had to extend the screening exercise up to 31st October 2021 because of the numbers that showed up for the exercise.

October is globally declared as a month to raise awareness to reduce the stigma of breast cancer through education on symptoms and treatment.

Breast cancer is the most common cancer type in females around the world, according to the World Health Organization (WHO).

Breast cancer awareness is therefore imperative, as early detection, often through screening, can help detect cancer at a stage when it is easier to treat. It is therefore of essence, that women especially, resort to routine checks, early testing and detection.