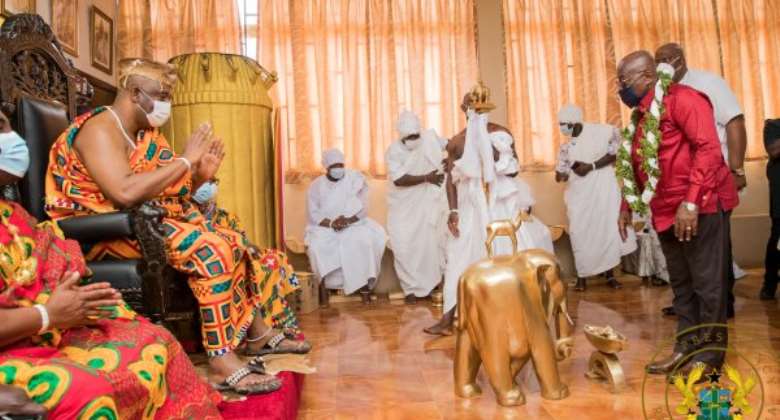 President Akufo-Addo has pledged to help to reignite the teaching of Ga Dangme in schools in the Greater Region soon.

He explained that effort would soon be made by the Ministry of Education in collaboration with the Ghana Education Service to ensure that people with the requisite skills in the teaching and learning of Ga Dangme are posted to schools in the region to teach the language.

Nana Akufo Addo announced this on when he paid a courtesy on the Ga Mantse, Nii Tackie Teiko Tsuru II, at his palace at North Kaneshie in Accra.

His announcement was in response to a request made by the Ga Mantse during the courtesy call by the President for the government to help improve the teaching and learning of Ga in schools across the region.

The Ga Mantse had complained that schools in the region were finding it very difficult to get qualified teachers to teach Ga in schools across the Greater Accra Region, leading to the Ga language losing its existence.

The courtesy call was part of the President's tour of the Greater Region. It was the last working visit after he touring all the other 15 regions earlier.

He lauded the people of Accra for the effort made to bring about peace leading to the enstoolment of a new Ga Mantse.

The President assured the Ga Mantse and the Ga people of his government's readiness to put in place the right measures towards the sustenance of peace in the region and the rest of the country.

The Ga Mantse, Nii Tackie Teiko Tsuru II, was full of praise to the President for the various development projects springing up in the region and pledged to collaborate with the Government to maintain the peace for the people to have their peace of mind to undertake their businesses daily.

He explained that to help increase the speaking, reading and learning of the Ga language, the traditional authorities on their own have been sharing it on their social media handles to remind people of the existence of the language.

The Minister of Education, Dr Yaw Osei Adutwum, stated that he would liaise with the Ghana Education Service to ensure that people who had the know-how to teach Ga would be posted to the region to teach the language.

He assured the people of the government's preparedness to put in place the right measures to ensure that education continued to be the pivot on which the wheels of development revolved.

The Education Minister was upbeat that with the current state of measures put in place by the government, the nation's education would soon be the best in Africa and among the best in the world.

He appealed to all stakeholders to continue to work hard to ensure that all the initiatives would yield the expected results.

Franklin Cudjoe back calls for probe into Covid-19 expenditu...
41 minutes ago

North East: One killed in clash between two communities
41 minutes ago