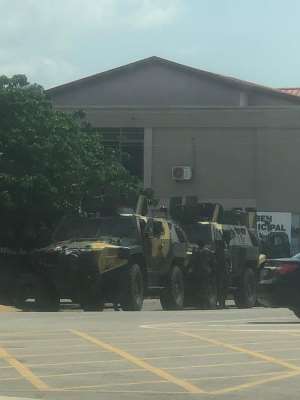 Reports reaching ModernGhana News indicate that Assembly Members of the Juaben Municipal Assembly have been locked up since morning for refusing to confirm the President’s nominee Mr. Alex Sarfo Kantanka today Friday.

Mr. Sarfo Kantanka popularly known as Chairman Aluta was rejected in the first confirmation exercise as he polled six out of 26 votes cast held two weeks ago. Per the local government act, he is not even qualified to be renominated for the second exercise since he failed to hit the 50% mark needed to be renominated.

But deep throat tells ModernGhana News that the Ashanti Regional Chairman, Bernard Antwi Boasiako aka Chairman Wontumi who is deeply involved in the matter vowed to teach the Assembly Members a bitter lesson by keeping them hostage till they confirm Mr. Sarfo Kantanka.

Three Military armoured vehicles and a van of police personnel reportedly drawn from the anti-armed robbery unit have surrounded the Juaben Municipal Assembly where the vote is supposed to take place today.

Our source who managed to speak to us from the hall where they are currently held hostage said, the locked up Assembly Members have also vowed not to vote even if it will cost them their lives.

The voting which was supposed to have been held last Friday had to be postponed indefinitely as Mr. Sarfo Kantanka allegedly sent word to the Ashanti Regional Minister claiming he was still pleading with the Assemblymembers who were planning to reject him again.

A delegation of traditional leaders and Member of Parliament for the area, Ama Pomaa Boateng were sent to persuade the Assembly Members but still.

If persuasion fails force must be applied tactics have been deployed to compel the Assembly members who have also refused to yield. ModernGhana New is monitoring developments at the Municipal Assembly.

One confirmed dead in youth, Police clash at Kotobabi Market
30 minutes ago