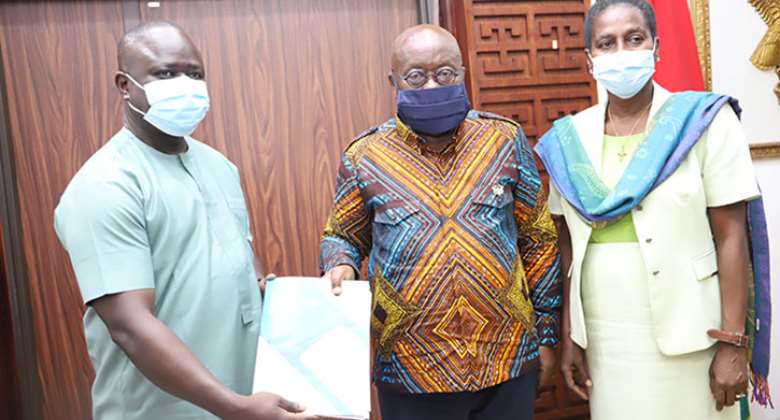 President Akufo-Addo (middle), being presented with the 2021 Census Report by Prof. Samuel Kobina Annim (left). With them is Grace Bediako, a member of the National Development Commission (NDPC)

The Government Statistician, Professor Samuel Kobina Annim, has presented the preliminary report of the 2021 Population and Housing Census (PHC) to President Akufo-Addo.

At a meeting at the Jubilee House on Wednesday, he said among others that there was the need for the country to invest heavily in its youth and to initiate a conversation around the settlement of the country's population.

The 2021 PHC commenced on June 27 and it was the first digital census in Ghana's history, which guaranteed the availability of real census data during and after the exercise.

Presenting the preliminary report on the PHC to the President, Professor Annim said the census made four major findings which should immediately engage the attention of government.

The first emphasises the need to engage the Ministry of Local Government, Decentralisation and Rural Development for them to start having conversations around what informs the settlement of population.

“The second thing that we want to take away is that the a-set distribution point to a pyramid which show that our population remains useful but the threat in there is that the share of the youth is declining so we need to take advantage of the returns of the demographic dividend and invest more in the youth,” he noted, adding that the third was in the area of pre-primary education.

“While we give a lot of commendation to the Free SHS complementing basic education, there is a lot of deprivation and underserved population at the pre-primary level,” he said.

“Following our ratification of the free and compulsory universal basic education, we need to begin to focus on the kindergarten, three to four-year-olds and we realise that this is very stake in terms of the deprivation in quite a number of areas,” the Ghana Statistical Service boss emphasised.

The last area that need attention by virtue of the findings of the PHC are crowding and disparities when it comes to social services.

Whilst acknowledging the huge investments in the different interventions that are being made in the provision of social services with specific reference to Agenda 111, which came up in August 2021, the Government Statistician said “what we are calling for now is in as much as these interventions are welcomed, we always need to be guided by two things; are they addressing the crowding that we are seeing in places like Greater Accra, and more importantly, are they addressing the disparities that we see in especially the newly created regions.”

He described the findings of the report that says the Ghanaian population has increased fivefold since independence is quite significant.

“We are very grateful to you, your staff and your team for the work that has been done. This work was due for last year but because of obvious reasons of the COVID intervention, it couldn't be done,” he said, adding “the methodical and efficient manner with which you have gone about it is something that has catch the attention of the nation.”

It was the target of those who spearheaded the 2021 Population and Housing Census (Ministry of Finance, Ghana Statistical Service, Ministry of Local Government, Decentralisation and Rural Development, and the Ministry of Information) that the data they gather after the PHC will be used to influence decision making in twelve (12) thematic areas.