Manager dragged to court for siphoning GH¢379,740.00 from his employers account 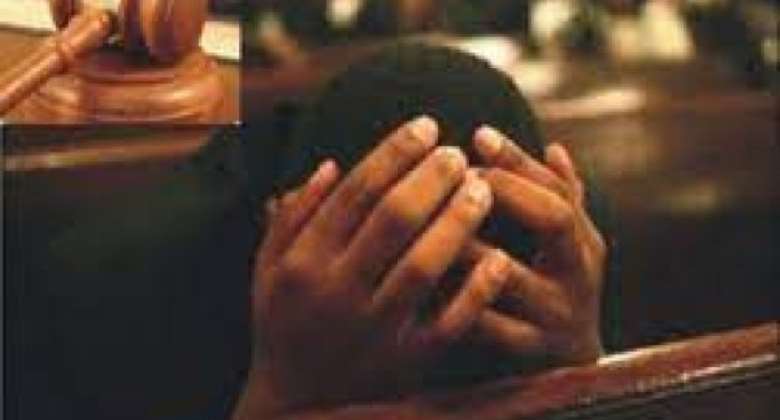 Stephen Poku-Gyimah, a business development manager, has been put before an Accra Circuit Court for siphoning GH¢379,740.00 and $6,150 from his employer's account.

Poku-Gyimah, charged with two fraudulent transactions of land, forgery of other documents and three counts of stealing.

Accused has pleaded not guilty.

The Court presided over by Mrs Evelyn Asamoah admitted the accused to bail in the sum of GHS 1 million with two sureties to be justified.

The matter has been adjourned to November 23 and the prosecution has been ordered to serve accused persons with their disclosures.

Poku-Gyimah's counsel pleaded for bail, saying the accused would appear to stand trial and he was obliged to clear his family's name.

According to defence counsel, the accused was not interested in running away as he had cooperated with the Police.

Counsel drew the lower court's attention to the fact that another aspect of the matter was before the High Court.

Prosecution led by Assistant Superintendent of Police Sylvester Asare, narrated that the complainant was the Managing Director for Eland International Ghana Limited also referred to as (EIGL) a company incorporated under the laws of Ghana.

Accused was a former employee of the complainant. During the month of January 2019, the complainant reported theft, forgery and related offences against the accused, Poku-Gyimah.

Prosecution said the Police commenced investigations into the matter.

According to prosecution, investigations revealed that EIGL was a subsidiary company of Eland International Group Limited, Bangkok (EIGLB), based in Thailand.

Upon assumption of office, the accused advised the complainant to purchase land for the construction of a warehouse for EIGL.

After convincing the complainant of his intentions, he contacted one Winfred Kumah Apawu, a property agent, to assist him purchase a parcel of land for the complainant.

Prosecution said the said Kumah got a parcel of land with an existing structure situated at Achimota-Neoplan for the complainant.

The accused who acted on behalf of the complainant, entered into a purchase agreement with Barton Anan Johnson and Samuel Maxwell Awusu Johnson, owners of the land through Kumah.

The parties settled on GH¢300,000.00 as the total cost of the five plots of land including some existing structures on the land.

Prosecution said unknown to the complainant, the accused inflated the cost to GH¢700,000.00.

Unknown to the complainant, the accused bought the two parcels of land at different locations namely at Mile Seven and Achimota Neoplan respectively in the name EIGL with the GH¢700,000.00 he received from the complainant.

Subsequently, Prosecution demanded and received GH¢4,226, 003 from the complainant for the construction of the warehouse at Achimota Neoplan site.

Accused also caused to be disbursed cash of GH¢191, 700.00 from the company cedi account current account number with NIB for the continuation of the construction on the same warehouse.

It was established that the accused later directed the property agent to prepare indenture for Neoplan site in his (accused) name and the name on the indenture should read Nana S.Y. Poku Gyimah.

Prosecution said the accused also caused cash in the sum of GH¢172,900.00 and $240,000 respectively for the construction of the same warehouse and he changed name on the land document.

Prosecution said accused on November 2007 wrote to the complainant's lawyer and requested that his signature should be on EIGL Cheques to enable him transfer GH¢32,974.00 and $6,150 from the company's account at first Atlantic Merchant bank and $6,150 from SG SSB Bank account to EIGL cedi account.

Accused also made several changes to EIGL including the change of auditors.

Prosecution said the accused made multiple sales of Mile Seven land belonging to EIGL to four companies and individuals.

During interrogation, the accused claimed ownership of the warehouse and explained that it was a Mortgage facility made available to him by one of the Banks he had worked with.

According to the prosecution, the said bank has denied the accused person's claims.